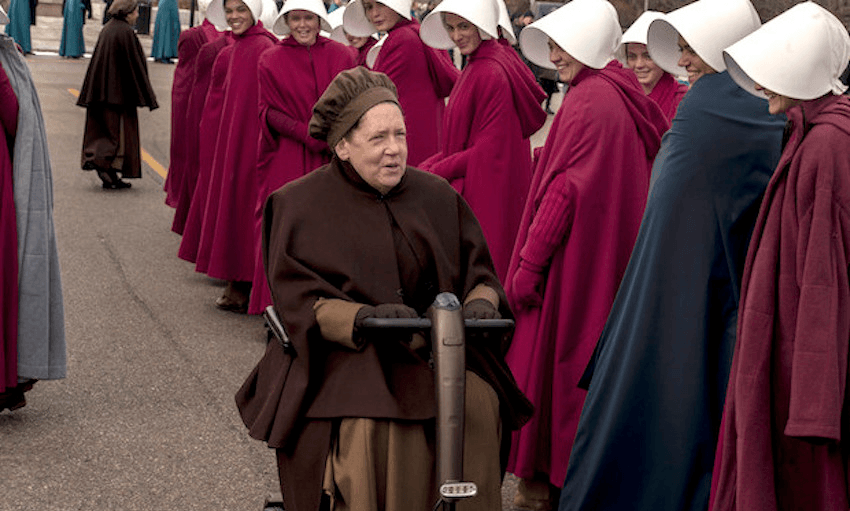 There ain’t no party like a Gilead party, as June enjoys a dedication, a mobility scooter and some poolside plotting in this week’s episode of The Handmaid’s Tale. Tara Ward recaps.

Say what you will about Gilead, but they bloody love a straight line. This week’s episode was a masterpiece of order and symmetry, as the good folk of our favourite dystopia came together to celebrate all the new babies. Nobody does ceremony better than Gilead, and every single shot of this week’s episode was choreographed to perfection, filled with muted colours and shadows and balance.

Just when you thought Aunt Lydia couldn’t get any scarier, she’s now hooning around on a mobility scooter. While Aunt Lydia did donuts in the carpark (if only), June continued to seek people to be persuaded to “burn this shitplace to the ground”. Her main hope, Serena, was a Dedication no-show, but every other sucker in town endured the sight of the Commanders and their wives showing off the babies they’d stolen from other women. Praise be, under his eye, double thumbs up.

The celebration continued at the Dedication after-party, where the Handmaids were hidden away in the Putnam’s kitchen so as not to embarrass the regular people. As far as parties go, this one sucked. There were no karaoke or streakers, just a dry nightmare filled with Devilled Eggs (metaphors, ahoy) and Commanders having fun chats about how “smart girls are trouble”. Good times, thanks for coming.

Fred used the party as an opportunity to offload to June about the shithouse state of his marriage, while June struggled to understand her feelings for Fred. His beard did seem bushier than usual. Was that the confusing part?  Either way, June can never trust a man who recommends devilled eggs as a delicious party snack, because that shit repeats for days. June should light that match ASAP, those eggs will bring the entire dystopia to its knees.

Our two favourite smart girls made trouble of their own in the Putnams’ pool room, where they shared a sneaky cigarette and debated their next move. June pushed Serena a little more with the knowledge Fred was open to change in his marriage. “Wear the dress, pull the strings,” she told Serena. “Also, make sure he trims his beard.” Might have imagined that last suggestion, but the sentiment is much the same.

There was also trouble in the living room, when Janine begged to become Ofwarren again so she could be closer to her daughter. Aunt Lydia was not impressed. Five minutes earlier she’d been bonding with Janine over a cup of tea and making affectionate claw gestures, but Janine’s impertinence unleashed the inner monster. The Commanders watched on silently as Aunt Lydia beat Janine, until June intervened by shielding Janine and screaming the forbidden word “no”.

Aunt Lydia went too far. She went further than that mobility scooter could ever take her.

Meanwhile in Canada, Emily reunited with wife Sylvia and son Oliver, and if you were hoping this would be the upbeat thread of the episode, please think again. Sylvia greeted Emily by saying “I’m so sorry I couldn’t find a space,” and I don’t think she just meant the lack of carparks. It was an awkward reunion full of unspoken pain and grief, and Oliver’s drawing of Emily as a superhero “fighting to get back home” made the tears flow. Mostly mine, and I am still worried about Emily’s cholesterol levels.

Even Nichole’s happy ending is in question, after Gilead somehow got their grubby paws on footage of Nichole and Luke attending a protest in Canada. The shit’s about to hit the dystopian fan again, which means June probably won’t be driving Aunt Lydia’s mobility scooter to Canada anytime soon. Or will she? Blessings, indeed.

You can watch The Handmaid’s Tale on Lightbox right here, and find all of our coverage of the show here.