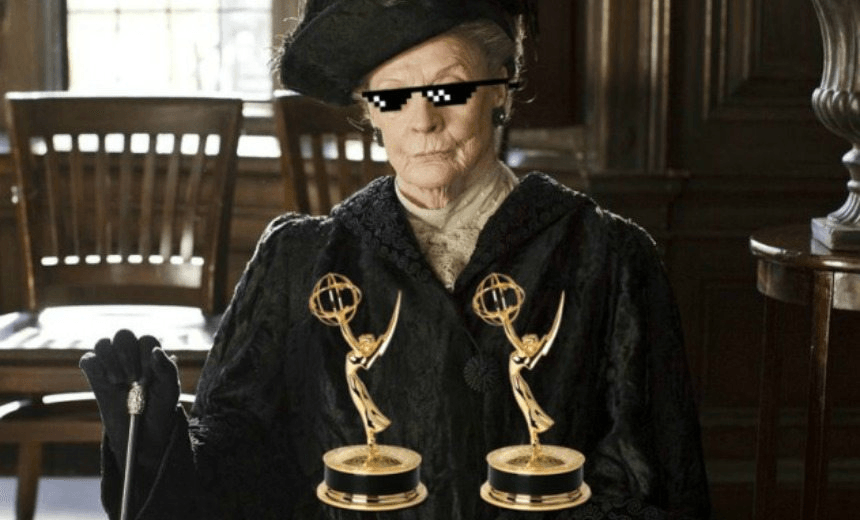 How many more awards can Maggie Smith win? A handy guide to Lightbox at the Emmys

With the Primetime Emmy Awards coming up, here are the many, many Lightbox shows that have earned themselves nominations, along with our winning predictions. Spoiler alert: Maggie Smith always wins.

What’s it about? First of all, the name is a pun. It’s important that you know this. Here’s what we made of Transparent way back in 2015 when we called it the show of the year:

“To say that Transparent explores the story of a gender-transitioning woman and the reaction of her adult children is accurate, but painfully limiting. It’s a show about the vicious task to find and represent your true identity, the dynamics of the family as a fluctuating hostile organism, and just the general struggles that come with being alive.”

What’s it about? An enduring sitcom following the tumultuous Pritchett-Dunphy-Tucker clan as they negotiate the sometimes warm, sometimes twisted, sometimes smothering embrace of the 21st century family. Has a very good episode where a pigeon gets inside the house.

What will it win? Modern Family has won 17 Primetime Emmys so far, which is probably more than the rest of the world combined. Rumour has it if you can get a Modern Family actor to appear on your show for just a second, you automatically win an Emmy. This year the show is up for Outstanding Comedy Series (again). They’ve won five times already but who’s counting. Ty Burrell is nominated for Outstanding Supporting Actor and yes, he’s won already but again, who’s counting.

What will it win? Maggie Smith never goes to awards shows because she’s far too busy being Queen Of The World. If I were the Academy I would tell her beforehand that she’s already won Outstanding Supporting Actress in a Drama Series to entice her to make an appearance. She won’t, and then the three(!) Game of Thrones nominees in her category will be forced to John-Key-threeway-handshake their disappointment away while the presenter accepts the award on her behalf.

Julian Fellowes and Michael Engler are also nominated for writing and directing respectively but let’s face it, Maggie Smith will probably win those too.

What’s it about? A prequel set well before Breaking Bad‘s Walter White found the good blue stuff, Better Call Saul looks at the life of seedy lawyer Saul Goodman when he was better known to the world as Jimmy McGill.

What will it win? Better Call Saul has come up strong in its second season with a handful of noms after failing to take home a gong at last year’s ceremony. Bob Odenkirk is nominated for Outstanding Lead Actor while Jonathon Banks has a shot at Outstanding Supporting Actor. Both actors never won for Breaking Bad so really they’re just giving the Academy a second chance to right their wrong. They won’t win, slipping Jimmy is always down on his luck.

What’s it about? “A ripped-from-the-headlines political thriller that follows ex-marine PoW and his torturous relationship with bipolar CIA operative Carrie Matheson”, that our own Aaron Yap noted has gone from strength to strength in more recent seasons.

What will it win? Claire Danes has already won all the Emmys for Outstanding Crying Face but will she also take home an Emmy for Outstanding Lead Actress in a Drama Series? I dunno, ask her.

What’s it about? As Monitor’s Aaron Yap said, Orphan Black “the series brought female agency to the forefront, subverted gender norms, questioned the sticky ethics of genetic engineering and body commodification. All the while being an exciting, relentless, fast-paced cat-and-mouse thriller in its own right.”

What will it win? Tatiana Maslany is nominated in the Outstanding Lead Actress category for playing SEVEN characters. Which, according to the official* rules, means she is actually nominated seven times and has seven chances at winning.

*this rule has yet to be made official

What’s it about? An on-the-pulse legal procedural that follows Alicia Florrick, scorned wife and returning attorney at law. Aaron Hawkins put the addictive nature of the show best:

“I went from listening from afar, to glancing over a shoulder, to planted in front of the screen, to counting down the days.“

What will it win? It’s the final year for The Good Wife at the Emmys and though no core cast members have been nominated, Michael J Fox and Carrie Preston have both received nods in the Guest Acting Drama categories, along with Michelle King for Outstanding Writing in the finale episode. She’s up against Julian Fellowes and Downton Abbey’s penultimate episode, which of course means that Maggie Smith will win.

What’s it about? A deathly dark comedy set behind the scenes of a Bachelor-style reality show, examining the twisted personalities and power plays that go on beneath the reality TV sheen.

What will it win? Constance Zimmer is nominated for Outstanding Supporting Actress but that’s Maggie Smith’s category so tough luck for Zimmer. Sarah Gertrude Shapiro also scored a nod for Outstanding Writing. I secretly just want her to win so that I can find out if you’re supposed to pronounce the ‘REAL’ part a bit louder. But that’s also the same category as Michelle King and Julian Fellowes which, as we know, means that Maggie Smith will win.

What’s it about? A ‘50s period drama based on the lives of William Masters and Virginia Johnson, American pioneers in human sexuality research.

What will it win? A truly underrated show with a title as clever and layered as Transparent. Allison Janney is nominated again for Outstanding Guest Actress after winning twice last year. Her performance in the first season was so incredible they might just keep giving her Emmys until the show finishes.

What’s it about? A bloke called Elliott who rocks a hoodie and rocks a hack, to the point where he joins an underground vigilante society hellbent on destroying the evil corporations that rule the Earth.

What’s it about? A workplace comedy set in the 99th precinct of the New York Police Department, Brooklyn Nine-Nine is jam-packed with comedy legends like Andy Samberg, Chelsea Peretti and Terry Crews.

What will it win? Andre Braugher is the sole nominee, for Outstanding Supporting Actor in a Comedy Series. Now I know this might sound like a bit of a long shot, but I heard Maggie Smith is actually the favourite to win in this category.

What’s it about? All you need to know is that TV critic Aaron Yap referred to The Americans as “the best spy show on TV. Scratch that. It’s the best show on TV, period.”

What will it win? Keri Russell and Matthew Rhys have both snagged nominations in the lead acting categories, while character actress Margo Martindale unsurprisingly is nominated yet again for Outstanding Guest Actress. Joe Weisberg got a nomination for Outstanding Writing so we all know what that means…

Everyone’s a winner, including you. Click below to watch all the nominees in action.