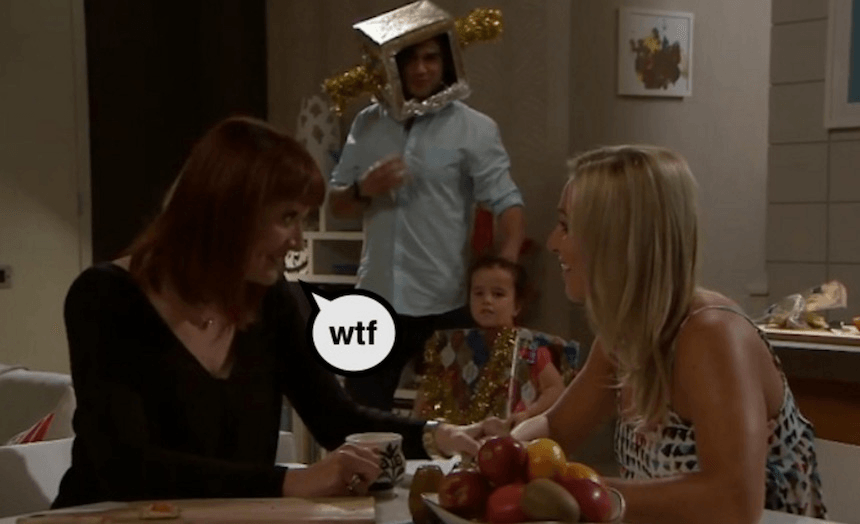 Tara Ward brings you her Shortland Street Power Rankings for last week, including Harper the hipster, Leanne the Dame-in-waiting and TK with some tinfoil on his head.

1) Victoria shoots her way to the top

She bloody well did it. The mystery assassin was all Victoria: the beige foundation, the blue glove, the stinky perfume. Tired of committing crimes against humanity, Victoria moved onto harming the environment and set light to her bloodstained bridesmaid dress somewhere deep in the Ferndale jungle. Think about the chemicals released into the atmosphere, that thing was 100% synthetic. Someone call DOC: Victoria is a menace to society.

It’s a real worry when Curtis is the sharpest tool in the Ferndale shed. He’s the only one who knew Victoria shot Drew, and decided to ‘play it straight’ to prove Victoria is a trigger-happy traveller from Crazytown. That’s right. He’s going to break Victoria by turning up to work and being nice to everyone. Genius, I tell you!

3) Leanne saves the world, one emergency evacuation at a time

You’re a bloody hero, Leanne. Never underestimate the value of an efficient Fire Warden in an emergency of toasted pita proportions. Someone give Leanne a Damehood or, at the very least, a matching fluoro armband.

Kylie’s Mum hit peak parenting this week when she reminded Tilly not to run in the house: “runny, runny, trippy, trippy.” This is timeless advice that Nigel Latta needs in his arsenal of wisdom. Norelle needed guidance of her own after she visited Chris for a boob job and came out with breast cancer.

The shock made her go cockamamie crazy and book into a clinic in Mexico, where they cure cancer by dancing under rainbows and rubbing garlic into your eyebrows. Settle down, Norelle: runny, runny, trippy, trippy!

If Harper were any more inward looking she’d turn herself inside out. Somebody get the woman some cheese to go with her whine, before her neurotic self-analysis makes my ears bleed. I don’t have time for this shit, haven’t you heard Norelle has cancer?

With that said, full marks for Harper’s attempt to colour coordinate with Drew’s apartment. Like the rest of his furniture, Harper is sleek and stylish – but probably uncomfortable to sit on.

My theory that TK is actually a robot from the planet Patriarch is now confirmed as TRUTH.

7) Murray is awash with grief and loneliness

Lonely Muzza now spends his days at his favourite beach, where Wendy’s ghost appears at high tide to tell him what chickpeas are on special at New World. Those look like sensible shoes, Murray. Wendy probably got them on sale from the Shoe Warehouse. Don’t tarnish her memory by doing something drastic. STEP AWAY FROM THE WAVES, MURRAY.

Could there be a more boring character than George? His mood swings were as pathetic as Harper’s. “Am I a good doctor,” he moans, “or am I a great doctor? Life is so hard”. Frankly, George only made it into the Power Rankings this week because he was in a scene with a fake heart lying on a desk. That’s TV gold right there, people.

That was Ferndale this week: shooters revealed, diseases discovered, robots doing whatever the hell robots do. Will the salt water ruin Murray’s shoes? Will Drew and Harper stick together despite Harper’s need to match her outfits with his décor? Will a diet of guacamole and corn chips cure Norelle’s cancer?

None of those things will happen, but in the wise words of Rachel McKenna, corporate guru and Ferndale agony aunt: “if you can’t be sympathetic, stick a muffin in it.”

The infomercial queen on ditching TV for the greener pastures of social media.
By Tara Ward
TV writer