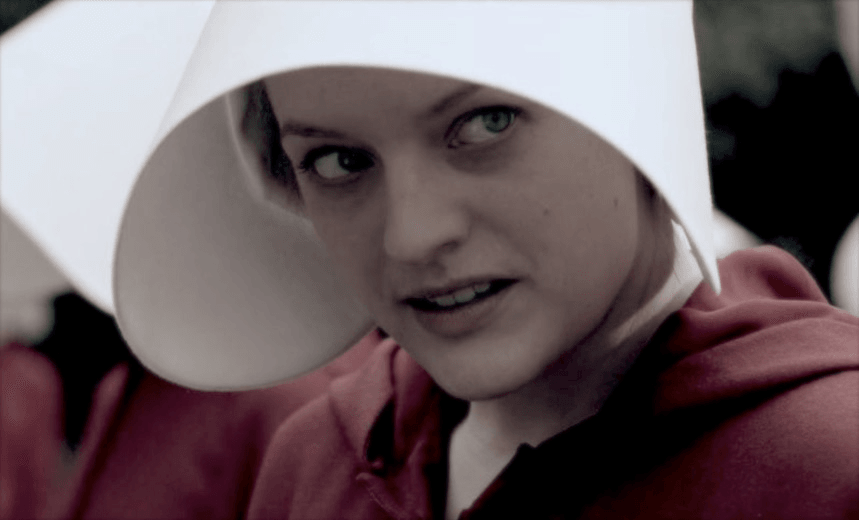 Episode 10 of The Handmaid’s Tale hits Lightbox today. Sophie Smith lists her hopes and dreams for the series finale.

????SPOILER ALERT???? This list contains a lot of spoilers from the first nine episodes.

Last week I wrote down some feelings I had about the pilot of The Handmaid’s Tale. I have since marathoned the season (bar the final ep), and it’s safe to say that I’ve been on a veritable roller-coaster of emotions throughout. With the impending release of the finale, I have high hopes for episode 10. They might be pipe dreams, and I may be a fool for daring to wish. But if the telly gods have any mercy, some of them might come true.

Again, many a spoiler for the preceding nine episodes ahead…

1. That Janine lives OR dies (honestly, I don’t know which would be better)

The last time we saw Janine, she was lying unconscious in a hospital bed after tragically throwing herself off a bridge. I don’t know if I want Janine to live, because I like this odd girl and I want her to be okay, or if I want her to die, because I long for her liberation (in any sense) from this hellscape.

2. That Emily will find some peace in this goddamn world

I didn’t think anything could make me feel more nauseated than when Janine’s eye was plucked out, but Emily’s clitorectomy was really too much. She is thusly maimed due to an affair with one of the housekeepers (who we also see hanged in front of her), and then she’s ostracised from the rebellion because she’s “too dangerous.” This poor woman is so strong, but she can not catch a fucking break. I just want some peace for her. Please.

3. That Alma will get the chance to show what a sassy badass she really is

Alma has been quite the dark horse throughout the season. We didn’t really know what she was capable of at first, but she’s shown herself to be pretty bloody clever, and badass enough to be working with the rebellion. Here’s to more screentime in the finale, where she can really show what she’s made of.

4. That Commander Waterford gets fucked

Initially I didn’t have really strong negative feelings towards the Commander; I was fooled by his passive benevolence. But throughout the season he’s shown what a fucking sexist, insidious, rapist creep he really is, and quite frankly I’d be happy for him to die a very premature death. I don’t care how. Just get it done.

5. That Mrs Waterford gets some power

Mrs Waterford starts the season in a more negative light, but after a while we see how she’s suffered throughout this process too. She’s not blameless, but I am far more sympathetic towards her by episode 9. She is a dominant, smart woman, who wrote books and made empowering feminist speeches, and this new regime has oppressed her a shit-ton as well.

6. That Nick will use his nefarious influence for good

Somewhat unsurprisingly, we find out that Nick is indeed an Eye. However, due to some risky behaviour and a little backstory, we know his heart isn’t really in it. Come on Nick, use what little power you do have for good!

7. That the Ambassador from Mexico will do something about the regime in Gilead

When June finally speaks to the (female!) Mexican Ambassador alone, and explains what life in Gilead is actually like, I really thought that something might change. But no, the Ambassador says she can’t help. This was by far one of the most hopeless moments of the season. But I dare to dream that the Ambassador will come to her goddamn senses and use her influence to dismantle the nightmare that is Gilead.

8. That June is not pregnant

This would really complicate things (especially now that we know Luke is still alive), and I just don’t think that I could emotionally handle that development.

9. That Moira will continue to fucking SLAY

In one of most ‘Yas Kween’ moments of telly this year, Moira literally slays a man, dresses in his clothes, steals a car, and makes a getaway. I try not to let my love for Samira Wiley blind me too much, but goddamn I am excited to see how she goes in ep 10, and hope like hell that this time her escape will work out.

10. That Luke and June will be reunited and they will find Hannah and conquer the world

Once we found out that Luke was alive and kicking in the beacon of freedom and hope that is Canada, all I really wanted was for he and June to reunite, to find Hannah, and live happily every after. And maybe take down the whole bloody system with Moira. It might be a little too much to expect from the finale of season one, but hey. A girl can dream.

Click below to watch The Handmaid’s Tale, exclusively on Lightbox: