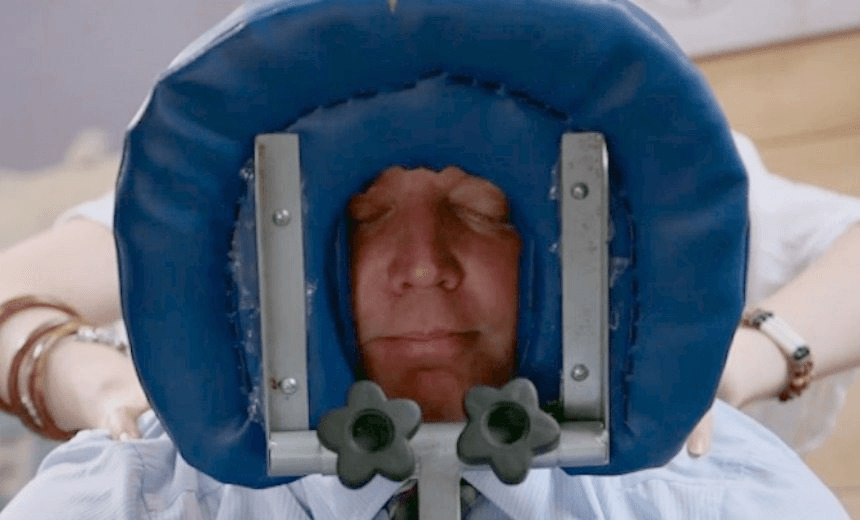 Leanne’s bloodstream was 100% Phyllovite, meaning she hooned around Ferndale with the unpredictability of a crazed octogenarian on a souped-up mobility scooter. She raced from one frenzied incident to another: she booked a facelift, directed a short film, cancelled a facelift, organised a fair, impersonated a doctor, and went batshit at Michael. It was “the works” burger of life, and it was equal parts magnificent and terrifying.

Praise the chariots of Zeus that the source of the Mystery Virus was found. Everyone knows that horse studs are synonymous with contagious diseases and human trafficking, so it was no wonder that a hot tip led Drew and Kylie to a stable. Bloody horses and all their… horse stuff.

Drew glared the virus into submission, TK did donuts in the carpark to impress Princess Kylie, and someone kept making crap jokes about horses to lighten the mood. Wait, that was me. It really stirruped my emotions.

3) Ralph the Camera Guy shoots us right through the feels

Strong, silent, and heart-racingly stoic – is Ralph The Cameraman Ferndale’s ideal man? He didn’t utter a word, in fact, we barely even saw him. For all we know, Ralph only has one eye and half a face, like our very own Phantom of the (Soap) Opera.

Ralph’s timeless performance earned him a place in the hallowed halls of Ferndale Legends, stuck on a pine plinth between Chops the Dog and Wendy’s Casserole Dish. Ralph, we salute you.

5) Lucy drenches Esther in a soggy cloud of adulthood

“Life is tough, and expensive, so get used to it, girlfriend.” Words of wisdom for Esther from an irate Lucy, who conveniently forgot that her father just bought her a new television the size of a small car, and then bought Ali a small car the size of Lucy’s new television.

Sure, Lucy was pissed off that Esther pinched the rent money and made her pay for an expensive dinner, but jeez, if I want a depressing Friday night life sermon I’ll turn over to Seven Sharp.

Stand back, that thing could cut glass.

7) Chris Warner has all he kneads

Just when you think you’ve seen every Chris Warner facial expression, he pulls this one out of the bag. Bloody legend.

Kylie rebelled against the three men who tried to protect and defend her like she was trapped in a stable of mutant viral spores. “Contact the nursing council!” TK ordered. “Go back to the hospital!” commanded Drew. “Hyuk, hyuk, hyuk!” gurgled Cam.

“Stop telling me what to do!” Kylie screamed at the patriarchy of Ferndale, as she contacted the Nursing Council and organised her return to Shortland Street. Yep, that’ll show em, Kyles.

Fate is a cruel mistress. Just as Harper realised she actually loved Drew, and that her shiny scalp fantasies weren’t caused by eating too much cheese at bedtime, her brother skied into a tree. In Alaska. In summer.

Will Drew and Harper survive this tyranny of distance, or will it be another 75 years until they sort out their romantic shit? And what about the poor Alaskan forest, destroyed by an idiot on his OE who doesn’t know his seasons from his schussing?

The world is going to hell in a handcart, and it makes me want to eat a lot of cheese before bed.