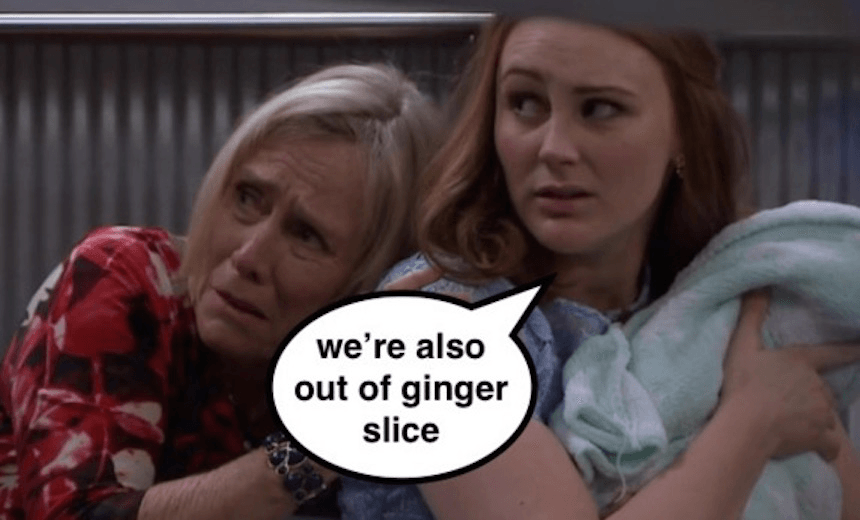 10) Gareth locks Dave the security guard in the supply cupboard

Have you seen Security Dave? The guy is a freaking giant compared to Gareth. I’m no scientist; in fact, I can barely spell the word. But I know enough about laws of physics to wonder how Teeny Tiny Gareth managed this.

How did Gareth manoeuvre an unconscious Security Dave out of the Lift of Doom and into the supply cupboard without a) being seen by Victoria, who was loving herself sick as impromptu Crisis Management Leader (“walk, don’t run”) or b) giving himself a hernia? Either way, this was the moment we knew Shortland Street was in trouble

9) Virginia gets dressed for the wedding

Virginia persisted in her delusions of being Drew’s plus-one to the wedding. She struggled her busted spleen into her designer dress, but possibly needed some BLUE GLOVES to really pull off the unhinged ex-lover look.

It took Harper four months to decide she did love Kind-But-Dull Boyd above all others. She was a snowy vision of sequins and sparkles as she prepared to get hitched, so it was a shame she spent most of her wedding day rocking that frock in a car park.

7) Margaret takes Drew to the cleaners

With her fraud exposed by Drew, Margaret was officially screwed. Drew ordered to clear her desk and sling her hook: “you can take what’s coming, and it won’t be holiday pay.”

Terrific news! Margaret was sure Drew said, “you can take…your holiday pay”. She calmly embezzled another $100,000, a minuscule amount that nobody will miss. Bon voyage, Mags!

What a terrifying face. Thankfully Kylie is an expert at being taken hostage by weird men, having recently escaped Trent Wagener’s crazed clutches. Kylie wasn’t fazed this time, as she didn’t even get chucked in a car boot. Call this a hostage situation? She’s seen much, much worse.

Our Kylie is a bloody genius. A sharp elbow to Gareth’s flabby stomach sorted him out quicker than you can say ‘underage boob job’. Kylie bolted to freedom, alerting several of her colleagues and saving countless lives. Kylie is magnificent.

Gareth burst into the café amid the Christmas Party for the Sick Children. This will really damage Leanne’s rep as a party planner extraordinaire.

Gareth lost it in the café, and not just because there was no chocolate brownie left. (Hey, we’ve all been there). He sweated a lot. He shouted continuously. Plus he killed Len, tried to take baby Stevie as a human shield, and threatened to shoot Santa Vinnie. This is officially the worst Christmas party ever.

Who doesn’t love a good wedding, especially a surprise one? George and Dayna stood in for Harper and Boyd in a spontaneous moment of pure romance. Or, a calculated moment of pure opportunism, given Boyd’s mum picked up the tab for the entire nuptials. You decide.

Ahh, love’s young dream. So happy! So in love! Regardless of the legalities of their ceremony, Dayna and George are now bound together for all eternity. They can spend their days searching for knobs at Bunnings and their nights doing each other’s hair. Hakuna Matata, etc.

“There’s nothing left to do but this,” muttered Gareth, as he busted two caps in Drew’s ass. (Minor detail: the bullets hit Drew’s thigh and shoulder. Thankfully Drew’s heart is made of stone, so no worries there).

“You’ve made your point,” Drew gasped, as blood spurted from his femoral artery. Yes, Drew, I’d say he had.

Poor Len died a hero’s death while wearing a Christmas cracker paper hat. He could barely remember what day of the week it was, and yet he tried to overpower a lunatic with a gun.

The children! Len died trying to save the poor, sick children! Christmas crackers will never bring me joy, ever again. Rest in peace, you silly old bugger.

I’ve know I’ve taken the piss out of McCaskill, but truth be told, I’m quite fond of the smarmy git. The thought of him bleeding all over the cold, wet hospital floor until mid January makes me want to cry quietly in the corner for up to five minutes.

What a way to kick a man when he’s down. Who is this blue-gloved assassin? How can Drew survive three gunshots, especially when there’s no sutures left in the hospital thanks to the shit Margaret pulled?!

The list of potential suspects is as long as Drew’s inner leg. So many grudges, so little time: Victoria, Curtis, Margaret, Virginia, the one night stand Drew dropped off at the stables that time…

Was that the best three minutes of New Zealand television? It was a televisual feast for the eyes and ears as Sol3 Mio serenaded us right to the edge of the season precipice.

Their beautiful voices transported us from happiness to heartbreak, from love to loss, tragedy to tenderness. It was intense, it was extreme, it was awesome.

Also, how amazing was Jacqueline Nairn? She was bloody great. Literally.

The melodic sounds of the opera climaxed alongside the terror of the hostage situation. Santa attempted to headlock Gareth in a move picked up from late night WWF marathons. Drew pleaded for help. Shots rang out and the Armed Offenders Squad shattered glass all over Leanne’s desk, which she will not be impressed about come January 18.

As cliffhangers go, that was spectacular. Who in the café is killed? Who makes it to safety? How can Drew survive? Did anyone check on Damo? Finally, let’s take a moment for this poor cake, another innocent victim in Gareth’s senseless rampage.