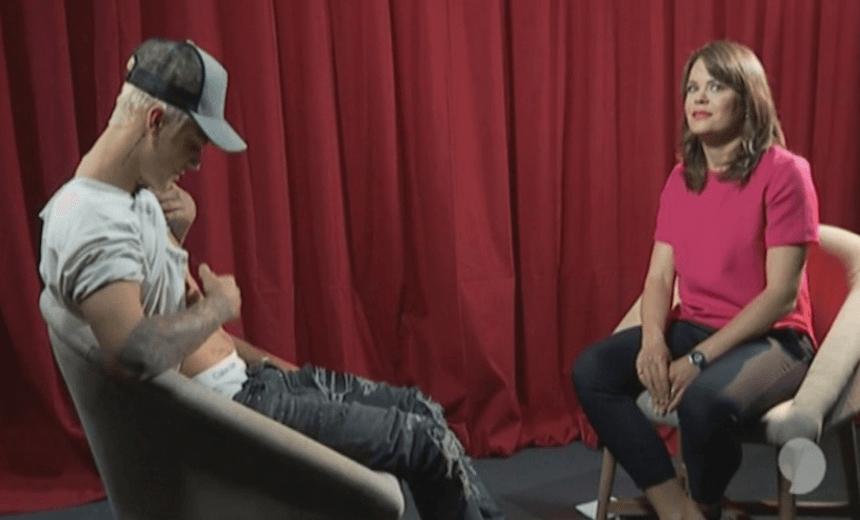 Television: Counting Down the 50 Best New Zealand TV Moments of the Year (#40-31)

The second in our week-long series, counting down the greatest New Zealand television moments of the year. Click here for the first instalment. Contributions by Alex Casey, Calum Henderson and Duncan Greive

Dancing With the Stars NZ was rocked to the very core after one audience member in the front row released a bout of stealthy burps. Nobody may have noticed but me, thankfully I have just the platform to share it. The inwards burp, the slow filtering out the side of the mouth, the guilty look straight down the barrel – eat your heart out Robert Durst, this is hands down the TV burper of the year. / AC

39) Seven Sharp gets a re-Brand

In October, a sweaty man seemingly wearing running shorts over jeans sprinted into TVNZ and demanded to be put on the television. That man was Russell Brand, who then proceeded to passionately kiss approximately everyone and feed cupcakes to female staff that he pegged as having eating disorders. What a revolutionary. / AC

The way I remember it is that Colin Mathura-Jeffree walked out onto the dance floor like Luke Skywalker sneaking into Jabba the Hut’s lair in Return of the Jedi. When he lowered the hood cloaking his head to reveal a fresh set of cornrows, the Dancing With the Stars public gasped, then murmered and tut-tutted, before rushing to vote the rebellious hair man off their televisions ASAP. Colin was eliminated the following night, and his cornrows were never seen again. / CH

37) Bieber is a feminine

“I have the soul of a feminine,” Bieber told Heather Du Plessis-Allan in their exclusive interview on Story, “that doesn’t mean I won’t punch you in the face, but I’ll cry about it after.” The feminine soul then weighed in on the flag, saying that we should keep the old one and receiving a high-five from a delighted Paul Henry off-camera. Dammit, we should have listened to that feminine. / AC

For an exciting couple of weeks this year Gloriavale was the talk of the nation, with the documentary Gloriavale: Life & Death and a Campbell Live series both shedding light on the secretive / sinister West Coast religious community / sect. Eventually their Trade Me account was unearthed by some top investigative journalism, revealing they were selling a rare African grey parrot. Their auction feedback shows that around the same time they also bought an Oculus Rift in what must be one of the year’s most mysterious Trade Me purchases. / CH

35) Goodbye my Pixie, goodbye my friend

Despite living that good life of binge-eating weed brownies and chilling with the Wellington Phoenix, poor little Pixie met her demise at the watery hands of a killer stream in August. In a way, it was entirely Harry Warner’s fault. As per. Not a dry eye was left in the country as the two young lovebirds exchanged their final words, leaving room for Shorty Scandal‘s James Mustapic to swoop right on in. / AC

One of the year’s most underrated local shows was TV3’s Reality Trip, where a group of young Kiwis travelled around Asia to experience life in some of the factories and farms which produce our consumer goods. The first episode was notable for the introduction of 25-year-old senior citizen Kieran and his conservative-bordering-on-really-racist-and-sexist views on women and immigration and dole bludgers and that. If anybody had watched the show Kieran would surely be one of our great reality TV villains by now, but instead we got Brooke and Mitch. / CH

Westside revived one of our most famous families in a whole new light, but the premiere also featured Rita trying to kill her toyboy with lamingtons laced with rat poison. A new take on an old classic. / AC

Earlier this year Hilary Barry took a much-needed holiday from Paul Henry, and Judy Bailey stepped in to keep her seat warm. Over the course of the week Paul got tetchy that “Judy Bailey” had started trending on Twitter, but Judy stayed composed, her powerful bouffant always buoyant. With the ‘Mother of the Nation’ torch passed between Bailey and Barry like a hot potato, we were truly blessed to have her back on our screens. / AC

“Thug Life goal kick: Just because you are out on the job in your suit, doesn’t mean you shouldn’t stop, grab a rugby ball then use your shoe as a tee – and show the local kids how it’s done. Go the ABs! #thuglife”

Last year, Paddy Gower’s mythology swelled as the election drew near, his sermons from the mountain getting ever more evangelical. But he cemented his reputation as the dominant TV reporter of this era with his instant classic “this is the fuckin’ news“. This year he’s been quieter, but still found time to go a little viral. Watch the man bang over a be-socked conversation from his own shoe! Then wince a little at the cultural appropriation! But mainly just enjoy the sheer boyish exuberance of Gower in full flight. / DG