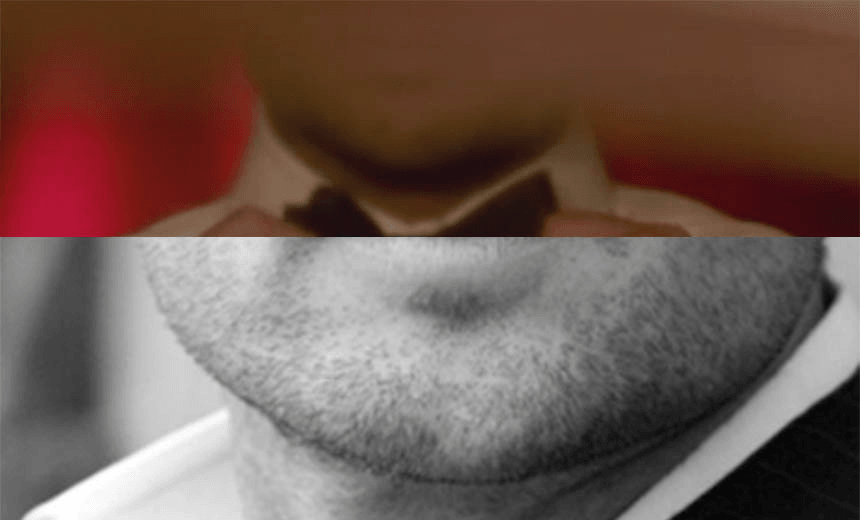 Does this colossal chin reveal the true identity of the next Bachelor? A Spinoff investigation

Has the slimy old Spinoff found the new Bachelor for 2016? And has he been hiding in plain sight on TV3 the whole time? Alex Casey investigates his online presence to see if the tailored suit fits.

This morning The Spinoff received word that Jordan Mauger is the next brave tribute stepping into Art Green’s non-existent shoes for the second season of The Bachelor NZ.

He’s an actor, director and philanthropist, raised in Christchurch and now residing in Auckland. At this stage the only really compelling evidence we can present to you is this chilling chin-comparison from The Bachelor NZ teaser promo, results of which have come out of The Spinoff’s Facial Mapping Laboratory with a 89% match.

But these are uncertain times, and our Facial Mapping Laboratory has been wrong in the past. We decided to take our findings to MediaWorks, and they weren’t budging. A winky face emoji could mean anything, it’s nowhere near as clear as a strong chin emoji:

With little else to go on, I thought I would look at what it takes to be a good Bachelor, and if Jordan Mauger ticks all the boxes. Get your biggest cyber-scuba mask on, it’s time for the deepest of internet dives to see if the big ugly ring fits (click here to read all Alex Casey’s coverage for The Bachelor NZ)

The Bachelor must be marketable

Being comfortable marketing yourself is a huge plus in The Bachelor universe. You’re going to be on every billboard, so you might as well find your “thing” and own it. Art Green had the body of Adonis, and solid self-promotional skills honed from years of pushing paleo powder on the mean streets of Ponsonby. The current US Bachelor Ben Higgins is clearly heir to a very delicious, yet crumbly, biscuit throne. Jordan Mauger also comes with his own enticing sales pitch: a role in TV3’s Westside as the pawn shop owner Rob Nugent.

Imagine the torrent of publicity when season two of the Outrageous Fortune prequel returns later this year, starring New Zealand’s second ever Bachelor?! It’s a classic rat king MediaWorks move to tie their franchise tails together, but it’s never been done as closely and aggressively as this.

I also found in my trawl that Mauger bought his own domain name on January 8 this year, and brought his online brand together across social media platforms with a stylish ‘JM’ letterhead. At the time of publishing, none of them have more than 15 followers. The ‘news’ section of the site is an empty shell of templates. This feels like a guy who is just waiting to become very, very well-known. He’s even got a bloody charity coming soon… what kind of average Joe could promise that?!

The Bachelor must be well-travelled

Remember last season when Chrystal boasted about having traveled to over approximately 30,000 countries? There’s no doubt that being a #wanderlusting tourist is a desirable trait on The Bachelor, and this guy has a hell of a travel profile. He’s hooned around from Italy to America, Fiji to Egypt. And, of course, Paris – city of love, city of Art Green holding a baguette. If that’s not standing on the shoulders of giants, I don’t know what is. It’s not like anyone else has ever been to Paris before.

The Bachelor must have knowledge of the franchise

Particularly in the US, The Bachelor franchise exists as it’s own ecosystem, regurgitating ex-contestants, birthing new stars and watching old ones shrivel and die on the beach in Bachelor in Paradise. You’d be mad not to do your research, which is exactly what Mauger had done. His dormant Twitter account only follows 62 people, two of which are ex-Bachelor talent.

I’ve crunched the numbers, and that’s a follow rate of 3.225% for Bach-related accounts. By comparison, I wrote about 50,000 words about The Bachelor last year, talked about it for over an hour a week over 8 weeks, and I’m only sitting at 0.868% Bach-related follows. The math don’t lie.

The Bachelor must enjoy a signature tipple

Much like Art perfected the art of the espresso martini, Jordan’s signature drink appears, by all social media accounts, to be a lovely dram of whisky. I’m seeing group dates to the distillery, I’m seeing a quaich being passed around the Mansion, I’m seeing projectile vomiting in the hot tub. You can also find him drinking his part of the angel’s share in New York under the hashtag #peopleofwhisky. I’m also aware of what a creep I am at this stage.

The Bachelor must be handy

I’m sure The Bachelor crew would appreciate having a guy on set that could “find his light” without the director having to use one of those laser pointers that cats like to play with. It appears that Jordan is to film and television production what Art Green is to bags of very expensive muesli. Not only is he an established actor, starring as BOTH ‘Uptown New Yorker’ and ‘Police Man’ in King Kong, but he’s au fait with being on set and dealing with crew.

He’s an assistant director on Taika Waititi’s upcoming Hunt for the Wilderpeople, and a bloody local hero who tried to build a permanent film studio out of earthquake rubble. His technical skills could certainly come in very handy when Mike Puru gets sick of holding the boom AND the flecky board at the same time.

Mauger could well be just another red herring like Martin Colenbrander, Logan Marbeck, Logan Dodds, and any other single man in New Zealand called Logan. With The Bachelor NZ returning in March, you won’t have to wait too long to see if this is the man selling his heart in the pawn shop of love.

Want to do some detective work of your own? Click here to watch our potential Bachelor Jordan Mauger in Westside, or below to enjoy some dark Bachelor fan fiction in UnREAL