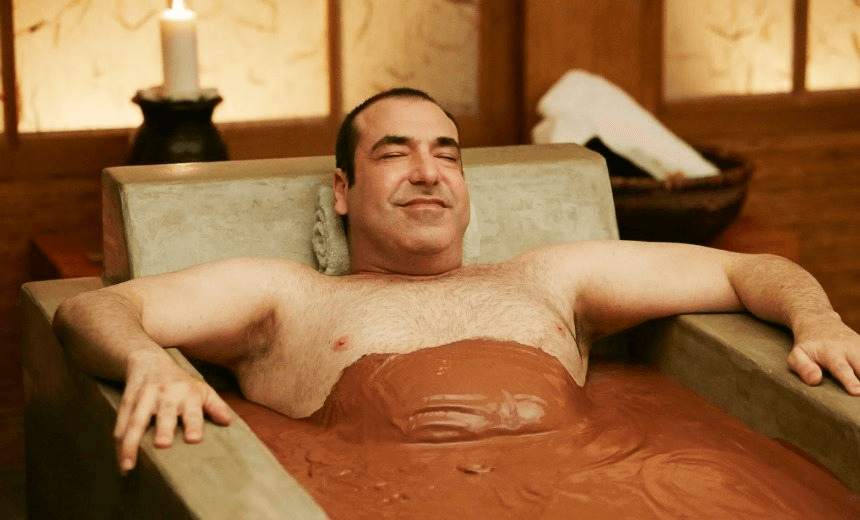 ‘You just got your ass nailed to the wall, sucker’: Suits’ Rick Hoffman on getting Litt up

In New Zealand to promote the return of Suits to Lightbox, Rick Hoffman revealed the secrets of mudding, catchphrases, and his mysterious assistant Norma to Madeleine Chapman.

The first ever episode of The AM Show aired on Monday morning, and its first ever studio guest was actor Rick Hoffman – aka the man we love to hate, Louis Litt from Suits. That was at the crack of dawn, and by the time I shuffled into his hotel room for an interview at 2:15pm that afternoon, he’d already pretty much spoken to the New Zealand media in its entirety. Despite that, he was in good cheer – wishing the AM Show crew well and showing unbridled enthusiasm for Duncan Garner’s pink shirt.

While he was fittingly dressed up in a suit for his on-screen media appearances, he chose to dress down for our chat, wearing a zip-up hoodie with nothing underneath. We spoke about trivial things: Marmite (it’s great), Tim Tam slams (have to try it), Pineapple Lumps (surprisingly good), and whether the New York Knicks should trade Carmelo Anthony (yes).

But really, I went in with one goal and one goal only: to find out what Norma, his assistant on Suits who was never shown and then suddenly died, looks like.

When you auditioned for the role of Louis Litt, what was the character brief?

When I read him in the pilot he was described as little more slicker.

On par with Harvey?

Like a rival. He wasn’t as sharp as Harvey but he definitely wasn’t as goofy as me.

Was that something that you decided to bring to the character?

How am I supposed to decide to bring goofiness? I’m biologically goofy. So that was just something. When we finally got down to very few people that were up for the role, they were very different than I was. They seemed a lot slicker than I was.The scenes that we auditioned with weren’t exactly goofy but there were some comedic elements.

He has a bit of a younger sibling mentality towards Harvey.

He represents the little guy.

I have eight older siblings. What would be Louis’ advice to having all these people above you in the pecking order growing up?

To just slow down, it’s not a race. Go at your own speed. If you feel like you’re in a race, let the cars pass you by and then you get a better gauge on how to make your move.

I have to say, some of his judgment calls have not been the greatest.

Most. But he usually has good intentions.

Being the man who portrays such a character, what can you legally say is the pettiest thing you’ve ever done?

I’ve had some moments. My biggest issue is even as a 46-year-old man, I hate to see people doing wrong things to good people. I hate to see injustice. And I have an issue, still, getting involved when it’s not my issue to try right the wrong.

Someone actually cut in front of me in line on my way here and I said nothing.

That’s one of my greatest hits. Now that I know you and I know that you’re a very nice person, if I saw someone cut in front of you, I’d have no trouble saying ‘hey, jackass, get in line.’ That’s me.

Oh god, how about this: I have a very long list of guest stars on a lot of popular shows.

So, what’s easier to get away with, a white collar crime on Suits or a violent crime on a procedural?

A white collar crime, of course.

Could you see Louis ever going into criminal law? He seems to love going into the courtroom.

I think Louis is an amazing trial lawyer. It’s interesting you mention that. They’ve covered so many areas of the character, I think that would be a nice area to cover; Louis in an intense trial. Get him to really cross-examine and things like that. That’s something me as an actor would really enjoy.

You were on Without A Trace, and someone who…

Has been on Suits.

…never had a trace…

I thought you were going to ask something else. Because I worked with Eric Close who was on Without A Trace, in fact I had scenes with Eric back then and now he plays Tanner. So it was really cool to see him.

But anyway, Norma what?

Your assistant who died. No one saw her when she was alive. So, since you have been on all these procedural crime shows, and you have an assistant who no one has seen, would you be willing to do a witness sketch?

I’ve expressed to my boss who I want, it’s Cloris Leachman.

Can you draw her?

Cloris Leachman as Frau Blücher from Young Frankenstein. That would be Norma.

I haven’t seen it.

Don’t be sorry to me, be sorry to everyone who’s reading this. You’re very young. But Cloris Leachman was a part of that team and she’s just genius.

Well I have a uni-ball pen, which I know Louis is a fan of, and I have paper and I have colouring pencils, would you be willing to create some sort of-

No, I want you to go IMDb Cloris Leachman.

And I want you to see pictures of her from Young Frankenstein with this big mole on her face. That would be my version of Norma.

So what’s her backstory?

If I can remember the speech I gave about her when she passed, about her dating Abe Vigoda in 1970-something. Apparently back then she was a hottie.

Oh so she had a glamourous-

I wouldn’t say glamourous, I would just say that she was a hottie. She definitely had problems with her toenails, I remember referring to those, and she got away with murder as far as doing her job the way Louis wanted.

It was just brilliant that we never showed her. I thought Aaron [Korsch] did a great job. It’s great that it’s even talked about.

Do you mud in real life?

I don’t care. I have no interest. I do it in the show and I don’t look forward to those days. The last one I had with Sarah [Rafferty] was more pleasant because now they know how to get us in there and out without having us in there for a long period of time. Because for the first time, they had Patrick and myself in there for six hours and it wasn’t healthy. They don’t know the consistency. But at least now we have airplane seat belts on the bottom so we don’t float up.

The catchphrase ‘Litt up’. It seems like a very Louis Litt thing to do; to have a catchphrase that nobody thinks is cool, then to have that word become very cool, and yet he still is not using it in the cool way.

Is he always going to say ‘Litt up’ or is he going to start saying ‘Litt, fam’?

No, he wouldn’t wanna weave. Not at all. When Louis tells somebody they got Litt up, there’s nothing better than that.

Do you think Louis thinks he coined the term?

I think he’d have some great tweets.

No, he wouldn’t tweet. But if he saw it he would probably think that somebody deceptively stole his saying. It’s a funny idea.

Are you sick of that word now?

Everybody comes up to me and asks me to say it and I’m like ‘absolutely not.’ Only because I don’t want to get sick of it. If I had a dime for everyone that asked me to say it, I’d be very rich.

When you’re shooting, is there a Harvey or Louis off camera?

There really is no Harvey off camera. I don’t know, it’s funny. That kind of dynamic isn’t on set. It’s just a nice light, usually fun feeling. Everybody has their bad days but it’s family so it’s very light and we all just want to do good work. But there is no Harvey-Louis dynamic.

A couple of your guest stars from earlier seasons were on Game of Thrones as well, which has announced a definitive end to the series. Does Suits have an end date in mind or could it go forever?

I think it’s up in the air right now. I think that decision will be made. Look, when you’re an actor, and it’s so hard to get a job, to stop the flow? Bad move. Let’s go, let’s run it to the ground.

Watch every episode of Suits and get ready for weekly helpings express from the US, right here on Lightbox.