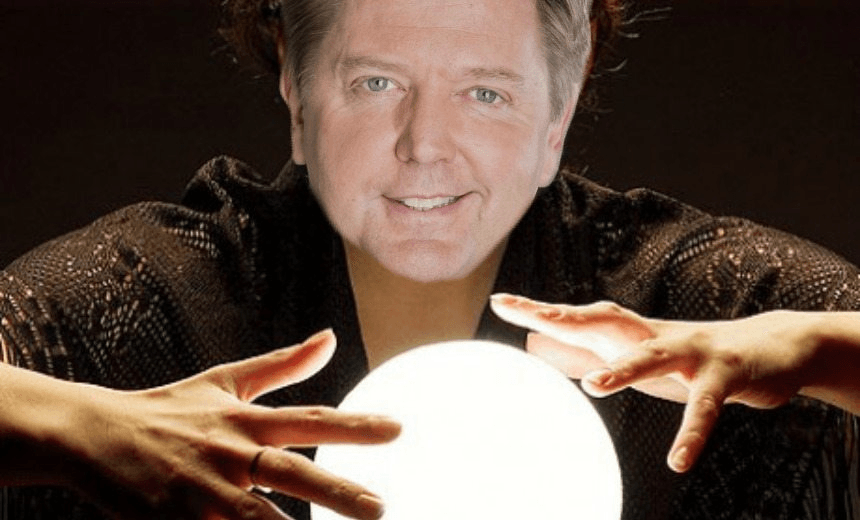 Some very real crystal ball predictions for Shortland Street in 2017

Tara Ward stares into Leanne’s crystal ball and makes her predictions for the coming year in Ferndale.

Like a drug resistant virus that refuses to be eradicated, Shortland Street made a triumphant return to our screens last night. The show kicked off its 25th year by presenting us with a gaping wound of human suffering and misery, culminating in Boyd sticking a fork into Ali’s brain and TK preparing to jump to his death.

It was as depressing as it sounds. It seems that Shortland Street’s forecast for 2017 is similar to our own: a Trumpocalyptic weather bomb of dark, malevolent storms and noxious golden showers ahead. Whether you live in Ferndale or Foxton, you’re about to be pissed on from a great height, and not in a good way.

These are troubling times, indeed. Thankfully, when I find myself in times of trouble, Mother Leanne comes to me, speaking words of wisdom: “let it be”. Also, “never trust a man with his hair in a bun” and “I am an open portal into another world.” Advice to live by, so who am I to argue with Leanne – Mother of the Nation, our own Judy Bailey of the soap world?

I’ve spent too many lonely evenings this summer, curled into the foetal position, worrying that Cam will run out of organic garlic or Kate will never recover from the Great Christmas Ham Debacle of 2016. Enough is enough. Let’s open the lines of communication, embrace our psychometric eminations, and peer into Leanne’s crystal ball to forsee what really happens in Ferndale in 2017.

The truth is out there, and it’s probably wearing Damo’s tiny dressing gown.

Prediction 1: Boyd saves the world, one piece of cutlery at a time

Boyd saved Ali’s life using some tiny kitchen utensils, probably pinched from the staffroom dishwasher. I can’t wait until July, when he cures cancer using only a potato masher and a miniature whisk. Bloody legend.

Prediction 2: Leanne and Chris discover they have more in common than just a fondness for soft pillows and fitness trackers

Kylie is a weird kidnapper magnet, given the amount of time she spent trapped in a car boot last year. It’s high time some other clown was abducted against their will and taken to a deserted ambulance bay / disused warehouse / the greater Auckland region, where they can beg for their life / dig their own grave / declare their undying love to their ex-boyfriend.

She is Kylie with the Good Hair and she deserves better.

Prediction 4: Due to popular demand Chris dances, alone, in every episode

Menu-based storylines are the best, especially when they involve delicacies like ‘wood fired luncheon on a bed of organically mulched sawdust’. Load up on the Gaviscon, we’re in for a gutsache.

Trapped in the Shortland Street lift with Damo, Lucy goes into labour and delivers a bouncing baby boy named Rachel-McKenna. Overcome by the life-affirming experience of childbirth, Damo experiences a spiritual ephiphany and retrains as a doula/home-security specialist. You do you, Damo.

TK’s a hard nut to crack, but I’m 54% sure there’s a cheeky grin lurking under that shiny veneer of mumbling rage and misogyny. It might take Boyd putting on Tilly’s cat costume and purring into a bowl of milk, or Kylie reminiscing about the time TK put a tinfoil box on his head and pretended to be a robot, but come on, big fella. You can do it.

Prediction 9: Rachel returns from the US with new husband LIONEL BLOODY SKEGGINS

Dreams can come true, and if we say it enough times, it will happen.