Longtime Bachelor fans Jane Yee and Tara Ward strip down the highs and lows of the third week of The Bachelorette NZ.

Tune into this week’s The Real Pod for more The Bachelorette NZ chat. Subscribe on Apple Podcasts, Spotify or anywhere else you listen to pods.

Tara Ward: Jane, we’ve finally reached the next destination in our Bachelorette NZ journey: Pash City. After two long weeks of budget cheese boards and shitty handball games, Lexie has finally made a connection with each of her bachelors. Lips are locking, teeth are knocking, and my faith in the power of a reality TV show to ferret out true love has been restored.

Jane Yee: If there’s one thing you simply must do before you meet the parents, it’s pash up the son. Preferably in a lake in your underwear. Dating 101.

TW: No lake was too freezing for Lexie this week, no bachelor safe from being sent home. Nice Jake! Sad Vaz! Josh! Damien! Matt! Aidan! It’s a wonder there’s anyone left. JY: Well, I mean there is hardly anyone left. We’ve just rounded up week three on our love journey and they’re already about to meet the Fockers. This love lockdown has gone faster than a Suzuki Swift.

TW: Or as Matt put it, “I’m the big chicken chicken winnin’ dinnin’ winnin’ chillin’ villain”. Hard to believe we had to say goodbye to such a poet.

TW: Most of my notes for this week say “Lexie looks cold” and “why are these men so casual about everything”. Thank goodness Jesse from last year’s Bachelorette NZ popped up as an intruder so the lads lads lads would start taking things seriously. Nothing like a mystery alpha male to put the big chicken winnin’ dinnin’ chillin’ villain amongst the bachelor pigeons. JY: I mostly only remember her underwear. She had no plans to strip down to her smalls on either of those lake dates, yet she was donned in the kind of knickers I would reserve for my wedding night. Are those her everyday undies? I am losing my mind over this. And over the fact that Jesse is seemingly there for the wrong reasons.

TW: Another reason why she is the Bachelorette, and I stay home wearing underpants that reach my armpits. They are also there for the wrong reasons, but I’m fine with that.

JY: Double duty, knickers and bra in one. That’s just efficient imo. Let’s talk about the dates. There were thrills! Spills! Chills! And a marketing campaign!

TW: I never want to see a marketing campaign on a dating show again, but it did give us this blessed sight of Jack in this charming, functional outfit. Send everyone else home and give Jack all the roses, we have a winner. 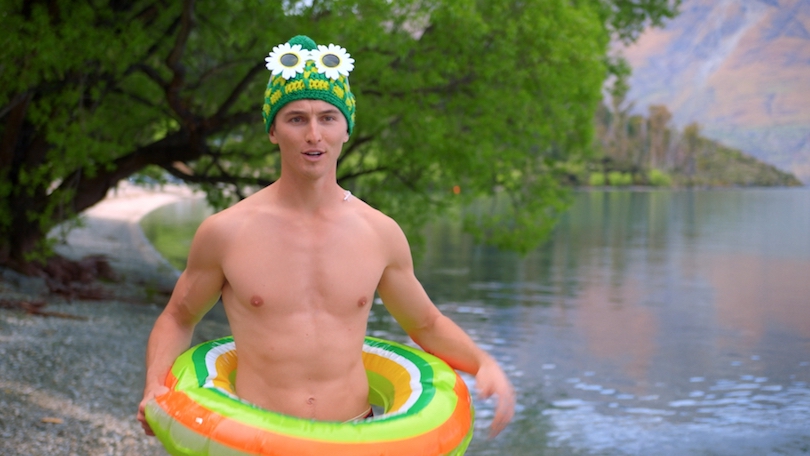 HE’S JUST A MAN, STANDING IN AN INFLATABLE RING, ASKING US TO LOVE HIM. (PHOTO: SUPPLIED)

TW: Very weird, but also so romantic that I had to hitch up my armpit underpants again.

JY: Tara, why is Jesse there? It seems odd to have just one intruder, and at the end of tonight’s episode it seemed like he was ready to jump ship having only been in Queenstown for 20 minutes. TW: Well, Jesse did reveal that “Lexie likes to party”, a revelation that turned the episode on its head. I know I’m old, but who doesn’t like to have a jolly time every now and then? A couple of shandies and a bit of Steps turned up loud never hurt anyone. The outdoors will still be there tomorrow, Hamish, have a chicken winnin’ dinnin’ and relax.

JY: Who would’ve thought those four seemingly innocuous words would send Hamo into such a spiral? He’d been watching his mates pash up his girl all week and made an absolute muppet of himself in the ice hockey rink, but it was the big reveal that Lexie sometimes stays out past pumpkin o’clock that made him question whether or not he wanted to stay. What sort of travel blogger isn’t up for getting on it in Ibiza?

TW: I don’t know the answer to that, but I do know who the next Bachelor NZ is. It’s not intruder Jesse, but old mate Moses Mackay! I’m excited as a single man thinking up a winning marketing campaign for Queenstown. Puff me up some water wings, I’m done. See you next week!

JY: I shall wait patiently like Jack’s clothes on a bed in anticipation of a single date that never comes.

The Bachelorette NZ screens Monday to Wednesday on TVNZ 2 at 7.30pm.