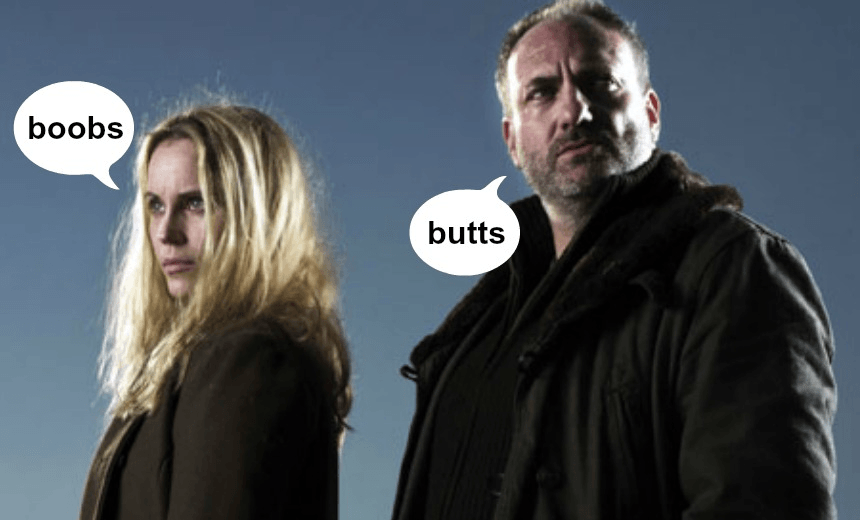 Scandi-lous: What we can learn about sex and nudity from Scandinavian drama

It’s not every day you see a naked bottom half of a woman with intestines hanging out on the telly.

My first thought was for the props department: what manner of pigs bits did they stuff in there to make that fake bowel glisten in the sun?

The Bridge is a crime drama that starts with a body found cut in two on the bridge from Denmark to Sweden. You know you are in for a fun ride when, in the first episode, Danish detective Martin (Kim Bodnia) stops suddenly, grabs his junk, squeezes it ever so tenderly and then staggers on. He has had, we learn, five kids with three women – this Great Dane has since been neutered.

The frank Swedish discussions and palpations of the male member in The Bridge tell us we aren’t in that prudish world of primetime television anymore. We’ve seen a lot of meat and lady veg on cable TV from the likes of Game of Thrones – but it’s important to note that this smorgasbord first appeared on free-to-air Scandinavian tele.

In a world that sees nipples banned from Facebook, even those of a statue of The Little Mermaid, and ball gowns being deemed inappropriate that show even a glimpse of cleavage, I find the Scandinavian approach to bodies and nudity a breath of fresh air.

It never ceases to amaze me that we can show images of dead children washed up on a beach, deplorable lynchings or Saddam Hussein with a noose around his neck, but if we see a bit o’ tit then Granny might pop her clogs and little Timmy will turn into a raving sex pest.

The Bridge didn’t stop with vasectomies. We soon saw a homeless woman dashing about with norks akimbo, full bush, Scandinavian sausage and more Swedish meatballs than in IKEA. One scene even had Stefan (Magnus Krepper) lovingly rubbing moisturiser into his penis. I asked my husband if he had ever done that. He declined to comment.

Personally, I am a fan of leaving some fleshy dangling to the imagination. I must confess I would never go nude if there was a hint of a chance of running into my Hairdresser or weird Uncle Bert. But the human body is not something to be disgusted of or ashamed of. We all have them, so let’s celebrate that. Teutonic septuagenarians and all.

This is why I appreciated that the nudity in The Bridge was not presented in a Game of Thrones way. You know, where a dragon burns all your clothes off and you stand golden-breasted atop a mountain whilst men in eyeliner hold meaty bones in the air and growl like Direwolves. It’s just Saga (Sofia Helin) googling on her bed with no knickers on. No big deal.

Beyond nudity, the sex too was not presented as a breathy Grey’s Anatomy affair. You know, all soft focus in a supply cupboard with tears in the eyes before Meredith ends up in a plane/car/train/UFO crash as Coldplay wails in the background. Scandinavian TV sex is rather more missionary flavoured with a soundtrack of slapping skin. You know, like normal people.

The Bridge is certainly not for the faint-hearted, with an extremely high body count and some pretty sadistic sights. But amidst the samurai swords, poison and spleens are some beautiful humans, reminding us that underneath our clothes we are all just piles of flesh and bone. To quote Embarrassing Bodies, there’s no shame. We are all the same.

With one exception being seeing Donald Trump naked, oh god, fuck that.

Think you can stomach all the wobbly bits? Click here to watch all three seasons of The Bridge on Lightbox