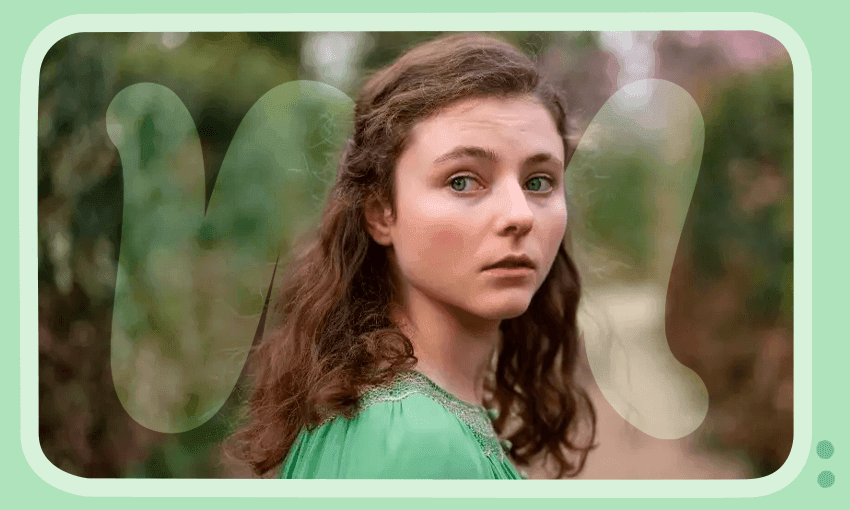 Thomasin McKenzie in her best performance yet as Ursula (over and over again) in Life After Life. (Photo: TVNZ, Image Design: Tina Tiller)

Review: Life After Life is a gorgeous TV adaptation of a quietly beautiful book

Thomasin McKenzie in her best performance yet as Ursula (over and over again) in Life After Life. (Photo: TVNZ, Image Design: Tina Tiller)

The BBC miniseries based on Kate Atkinson’s modern classic is a triumphant companion piece to her novel – thanks in no small part to Thomasin McKenzie’s best performance yet, writes Sam Brooks.

Nothing about Kate Atkinson’s Life After Life suggests it would be a good candidate for a TV adaptation. The high-concept 2014 novel revolves around Ursula, a British woman born in the first half of the 20th century who finds herself caught in a loop of life, death and rebirth. She dies multiple times – anywhere from within the first few moments of being born, to living decades before being crushed by rubble during the WWII bombing raids on London.

There is no rhyme or reason to the loop. Ursula never figures out why this happens to her, and barely even tries to. She just lives through it, and tries to do something slightly better, or at least different, each time. Atkinson rejects the impulse to solve the mystery by refusing to even ask questions – Ursula’s lives simply are. Now watch them unfold. In this respect, Life After Life runs against how we’re told dramas should play out, with answered questions and closed bookends.

It’s the sort of novel that’s always going to pose a challenge to writers eyeing a potential adaptation for the screen. Which is why it’s something of a surprise that the BBC’s Life After Life, streaming now on TVNZ+, is such a success.

Across four episodes, all directed by John Crowley (Brooklyn), Atkinson’s novel is condensed and translated into a glossy prestige drama. At times, you can sense it attempting to hold the audience’s hand – the first episode sets out the premise relatively clearly, while the novel had no such comforting impulse – but ultimately, the series becomes its own creature. It’s a companion piece to the novel, rather than a straightforward adaptation.

One of the most striking differences is the series’ treatment of Ursula, played in adulthood by New Zealand actor Thomasin McKenzie (Jojo Rabbit) in what might be her best performance yet. Whereas the novel had a strong sense of who Ursula was – headstrong, emboldened, slowly jaded by the onward march of history – the series instead portrays her as an everywoman character, moulded more by her circumstances than her choices.

We see Ursula the beleaguered housewife, Ursula the expat caught up in pre-war Germany, Ursula the wartime volunteer. It’s a credit to McKenzie that she is able to tie all these different Ursulas together – even though some of them get barely 10 minutes of screen time – and make each one feel lived-in and alive. The Ursulas we see for only a few scenes feel as important and vital as those we see for half an episode.

It’s a performance that sits in between the series and the novel, tying them together. The point is, of course, that even though Ursula has so many different lives, women of the time only had so many choices, so many lives. McKenzie plays the dawning realisation of that reality so beautifully that it makes you wish the series was even longer – a rare wish if ever there was one.

In saying all that, Life After Life is still an acquired taste. While this isn’t heavy material compared to the serial murderers and abusers that populate our streaming services, it’s not exactly light either, and it’s hard not to be aware that you’re watching a very serious literary adaptation. That’s especially true when the series dips into yet another philosophical discussion on cycles and loops, and the meaning of it all – another hand-hold that Atkinson resisted in her novel.

It rests on the ensemble cast to bring the series back down to earth, especially Sian Clifford (best known as Fleabag’s sister Claire) as Ursula’s terse mother, and Jessica Brown Findlay, finally making good on the promise of her Downton Abbey years, as Ursula’s glamorous Aunt Izzie who lives her one life to the hilt. These performances are vivid enough to almost, but not quite, turns this into a family drama that just so happens to have a rather unusual protagonist at its centre.

If there’s anything to ding Life After Life on, it’s that it could very easily be mistaken for just another World War Two saga, with khakis , khakis and greys dominating the screen. It’s understandable to use the established visual shorthand for this period, but it does the inventiveness of the series’ premise a disservice to make it look so conventional. The biggest visual flourish, a scattering of snow on Ursula’s face whenever she moves from one life into the next, ends up feeling frustrating – a reminder that more could have been done.

Not so long ago, Life After Life would have been event television – or at least a shoo-in for a Sunday Theatre slot. But in 2022, when hugely anticipated limited series seem to drop every other week, a four-episode adaptation of an acclaimed novel doesn’t feel especially urgent or necessary. Ironically, that’s sort of fitting for Life After Life. It’s about lives that don’t feel especially urgent or necessary to examine, but if you just take the time to look at them, they’re hard to ignore – and harder to shake.

Life After Life is available to watch on TVNZ+ now.