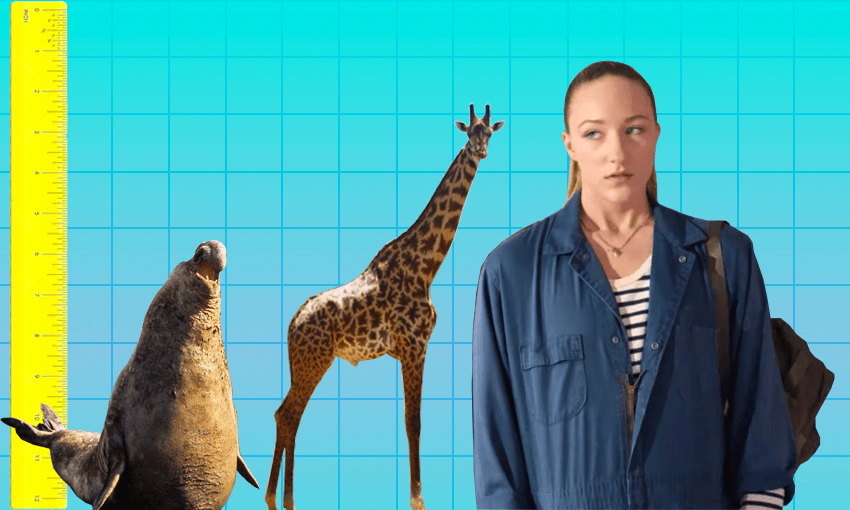 New Netflix movie The Tall Girl was roundly mocked before it even came out. Josie Adams, a tall girl herself, reviews it.

“You know that really, really, really tall girl you go to school with? The one that people call LeBron, Skyscraper, Patty long legs?”

That’s Jodi, the 6-foot-1 protagonist of The Tall Girl. I’m Josie, a 6-foot tall (181cm) writer at The Spinoff. No-one called me shithouse nicknames like that because I, like Jodi, am a giant, and would have king-hit them. The worst I got called was Man Hands Moody, and I earned that.

Netflix’s latest high school romance/self-love cringefest is based around this Jodi character, who is absolutely devvo about being tall. This is in no small part (lol) because of her father, who is convinced that being tall will kill her. In fairness, growing very quickly is terrible for your coordination; I probably averaged three bone breaks a year from ages 8-15. Now? I have the strongest bones in Auckland. What doesn’t kill you makes you stronger, babes.

I could use this review to piss all over the misinformed, condescending, and flat-out boring premise of The Tall Girl, but instead I’m going to use this opportunity to speak to all the tall girls struggling in New Zealand high schools: it’s OK to not be good at netball.

Just kidding, I’m gonna piss on this film. Some of the struggles Jodi faces are: being in the back row of class photos, not being asked on dates, and – oh, that’s all of them. That is all of her struggles.

The film kicks off with her tiny (171cm) friend Jack aggressively hitting on her, which is not what good friends do. She rejects him because she doesn’t want to look even more freakishly tall paired with him.

This is the one thing the film kind of gets right. I still feel mannish at times, or physically obnoxious somehow. Women can feel social pressure not to take up space – metaphorically and physically. One way you can feel more feminine is looking smaller by comparison; this is why I stand next to The Spinoff’s Toby Morris as often as possible.

Jodi wants to stand next to Stig, a Swedish exchange student and apparently the only man over 6 foot tall anyone in Louisiana has ever seen. He’s definitely hot, but is he smart? He walks into the film and straight over to the blackboard, where he writes down the molecular formula for menthol. Smart and a smoker; very cool.

It becomes clear that Stig is also attracted to Jodi, because they both like musicals. They also look related. I guess Scandinavians are into that. They pash on a tram, even though Stig already has a girlfriend.

In every romantic interaction, Jodi is forlorn about her gigantism. “Being a tall guy is great,” she tells Stig, “but when you’re a tall girl it’s all people see”. Jodi, my child, there are ways to combat this. Big hair, slogan tees, yelling, an overpowering stench, and parsley in your teeth are all techniques I have used effectively to distract from my disgustingly long body.

It can be hard to feel attractive when you’re not living up to the graceful-and-cute ideal of womanhood. That’s why supermodels don’t do it. Giselle Bündchen isn’t “cute”. Maria Sharapova isn’t “cute”. Neither am I. We’re stone cold foxy ladies. We’re statuesque. There are a hundred different kinds of beauty and tall girls are a pretty mainstream one.

I went to a single-sex high school in New Plymouth, so my experience wasn’t exactly the same as Jodi’s. I only saw teenage boys on the weekend, and I was only the fifth tallest girl in my year because everyone in Taranaki is from farming stock. Even so, I was clued up enough to know that boys don’t get their big growth spurt until 16 or 17, and once they do suddenly a lot of people are 181cm.

Jodi is only 16, so she’s still learning to love herself. She’s conventionally attractive, smart, and rich. She’ll get there. You, my tall child, may not be any of those things; but you’re not an insufferably moody musical theatre sapiosexual, and that counts for a lot.