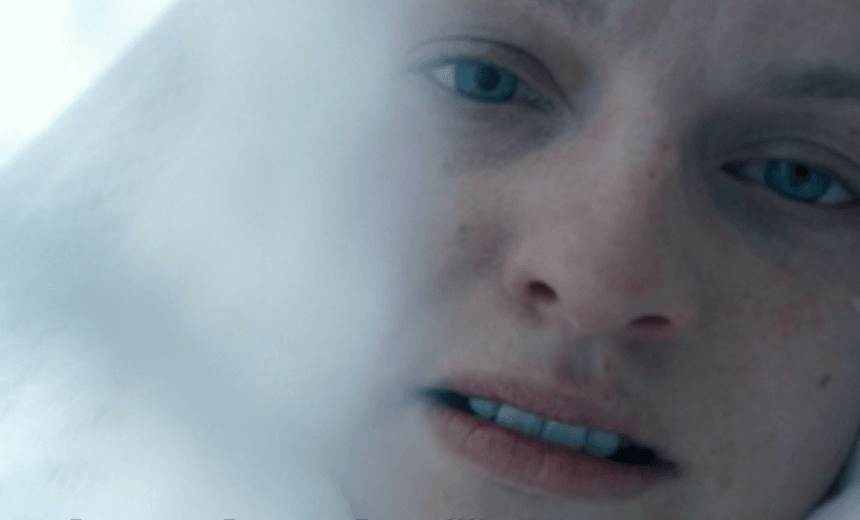 Alex Casey dissects episode five of The Handmaid’s Tale, including the march of the child brides and a lovely holiday to the colonies. Contains spoilers, obviously.

Finally, we’ve caught somewhat of a break. ‘Seed’ was perhaps the most relaxed episode of the season so far, and when I say relaxed I mean a couple of child brides, a couple of deaths and a near-miss miscarriage. The whole episode had a woozy, hallucinogenic feel to it, like we were sort of swaying in and out of consciousness just like several of the characters themselves. To be honest, I’d rather be unconscious for the scenes in the colonies because by gum does that seem like a bad time.

“We come here, we work, we die,” says Ofglen, long banished to the colonies for gender treachery and running that guy over that time. Her and Janine dream of holidays to Bora Bora, which is absolutely absurd because only Jeffree Star can afford to holiday in Bora Bora. The spend their days out in the fields, toiling in the thick toxic air while older women drop like flies around them. What are they toiling for though? I simply don’t know, but those big piles of mud aren’t going to move themselves.

Back in Gilead, June appears to have drifted completely back over to her Offred role, diligently sipping back rank smoothies and politely nodding and shaking her head. No Mrs Waterford. Yes Mrs Waterford. It doesn’t take long to realise that something is wrong, as some very unwelcome blood on the knickers suggests that her baby could be in danger. Up until this point, we haven’t been invited to think hard about the conflicted life that she is carrying inside her.

Are she warm to it? Does she resent it? Do she wish for it to live or die?

Things become a lot clearer after Offred is found blood-soaked and unconscious on the cobbles outside the Waterford mansion, presumably after tumbling from the window. She’s alive. So is her papaya-sized baby. Blessed be the fruit. “You’re tough, aren’t you?” she mutters to her belly under the sheets. “I will not let you grow up in this place. They do not own you and they do not own what you will become.” Damn I wish Offred was my Mum sometimes. Is that weird? Probably weird.

Also let us all pour one out for Driver Nick this episode, who got the worst promotion of all time. Not a pay rise, not a shiny new carpark or a bonus, but the invitation to partake in a ritual where he was married to a child bride. “Be fruitful and multiply,” the pastor goaded the line-up of newlyweds, as Nick threw furtive, heartbreaking glances at a teary Offred in the stands. He was a driver. She was a Handmaiden. Can I make it anymore obvious? It’s the star-crossed lovers story of modern times.

Where that wedding experience was truly horrible, the shining light of ‘Seed’ was a touching moment in the colonies, where Janine arranged for a dying woman to ‘marry’ the woman she loves. “Cows don’t get married,” spat Ofglen, who has clearly never used Google before. She argues that they have been eroded to just livestock, for either baby-making or mud-moving. Although their teeth are falling out like an actual living nightmare and there’s nothing to do but toil, the wedding ceremony was a small, triumphant reclaiming of joy.

Cows can get married, pigs can fly, and maybe everything is going to be okay.

Shot of the week

Sorry to be a bore, but HOW GOOD did Nick look in the pouring rain? The answer is: very.

Subplot of the week

There were little to no bangers in the entire episode, therefore I devote this slot entirely to Serena Joy’s ongoing battle to quit smoking. Really feels like the least of our worries, but okay.