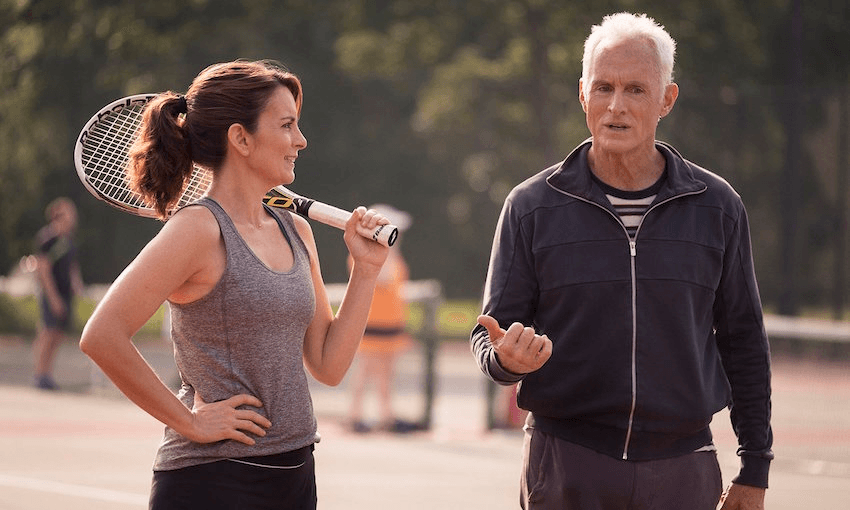 Review: Amazon Prime’s Modern Love is a sweet, warm cup of tea but little else

Sam Brooks reviews Amazon Prime’s Modern Love, an anthology series based on the New York Times column dedicated to ‘love in all its forms’.

A first date that ends up in the emergency room. A flagging marriage that finds new energy through tennis. The founder of a dating app who doesn’t believe in love, supposedly. A woman whose main emotional relationship is with her doorman. A woman finds love again in her last years. Two gay men want to adopt a baby and form a relationship with the woman carrying it.

If these sound like the loglines to short stories, that’s because they more or less are. They come from the popular New York Times column ‘Modern Love’, a series of first-person essays about love in all its forms. Platonic, romantic, sexual, paternal, at first sight – the works.

These stories, and essays, form the basis of Amazon Prime’s new anthology series, Modern Love. Each essay is turned into a half-hour episode, often cribbing lines directly from those essays into voiceover or sometimes even actual dialogue. Like their source material, the episodes are unrelated, but the eight episodes form a kaleidoscope of the different kinds of love that the column, after a decade and a half in print, aims to represent. It’s gentle television – often affecting but never punching you in the gut – and it is gently soaked in schmaltz, a little bit more so than its source material. It is, like the column, modestly successful in making you feel something.

The key to its modest success is John Carney, who developed the series. Carney might not be a household name, but he’s one of the most underrated and successful filmmakers of the past decade with a trifecta of thoughtful and heartfelt indie musicals to his name (Once, Begin Again, Sing Street). Hell, he’s pretty much turned ‘modest success’ into an art form. The same gifts that he brings to his film work are evident here – the minute attention to detail, especially the way in which a small moment can define a life – and, especially in the episodes that he is directly involved with, you see the performers rise to meet these moments with their own complexities.

It’s a perfect mix of maker and material, and Carney elevates the material where others might condescend or settle to it. Even the episodes written and directed by others, including Catastrophe’s Sharon Horgan and Shameless’ Emmy Rossum, have Carney’s light touch to them. There’s a hyperlinked celebrity-studded Garry Marshall (Valentine’s Day, Mother’s Day et al) piece of trash that could be made from these essays, but this series – even in its worst moments – is thankfully not that.

The show is helped by the cast, and no doubt this is the selling point for a lot of people who might not be familiar with, you know, a newspaper column from a city they don’t live in. It’s a mixed bag of household names (Anne Hathaway, Tina Fey, Andrew Scott aka Fleabag‘s Hot Priest) and critical darlings (Cristin Miloti, Jane Alexander, Julia Garner).

There are occasional moments of brilliance throughout – Catherine Keener breathes grace and regret into her role as a wistful journalist, Jane Alexander dives bone-deep into her character’s sudden grief – but there’s only one episode that well and truly reaches the threshold of Necessary Viewing™. The third episode, ‘Take Me As I Am Whoever, I Am’, written and directed by Carney, revolves around a woman. Lee (Hathaway) has manic highs and terrifying lows, which is represented with her highs being brightly lit and choreographed like a musical, while her lows are like your average gritty indie film. On paper, it sounds like an uninspired choice, but Carney handles it with his usual grace – the shifts are subtle and elegant, not jarring and sudden – that only amplifies the tragedy.

Hathaway is also, for the first time in at least half a decade, deployed excellently. Her affect as a performer has always been to amplify her character’s emotions, which is why she’s perfect for the big screen. Here, she’s always in close-up even when she’s filmed at a distance, so when given a character whose mood swings are rough, sudden and life-destroying, she’s able to amplify and make it feel real. The closing scene of this episode, a gesture of platonic love and understanding, is a work of genius between her and Quincy Tyler Bernstine, and worth the other seven episodes of gentleness. More than any other episode, it’s a reminder that those small actions of love can be genuinely life-changing, and that it seems to come out of nowhere makes it that much more beautiful.

The brilliance of this episode also highlights the biggest flaw with the rest of the show: they feel like they could be anybody’s story. Even though the essays are highly specific, the show often feels like it is attempting to sand down those edges to make it universal. The recognisable faces only heighten this – we associate Tina Fey with Liz Lemon, John Slattery with Roger Sterling – so they become types, not the real people they’re drawn from. Specific stories become representations of a type, and no matter how much Carney tries to focus on the moments that build up those stories, they become fables rather than essays. Fables are lovely, but that’s all they are.

You can watch Modern Love on Amazon Prime right now.