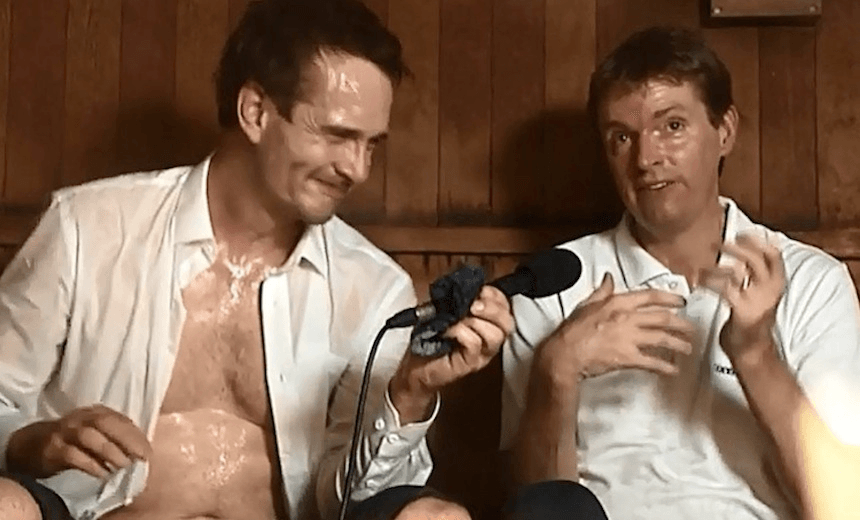 Television: Counting Down the 50 Best New Zealand TV Moments of the Year (#10-1)

The final in our week-long series, counting down the greatest New Zealand television moments of the year. Click here to catch up on numbers 50-41, 40-31, 30-21 and 20-11. Contributions by Alex Casey, Calum Henderson, Duncan Greive and Jose Barbosa.

Story’s biggest news stunt of the year saw Heather du Plessis-Allan fudge some paperwork to buy a gun online and expose a loophole in New Zealand’s firearms legislation. Police quickly moved to close the loophole after the story aired, but the saga has dragged on – last we saw some police were having a good old rummage in her drawers “looking for handwriting samples”. Will she go to jail? Maybe. Probably not. But maybe? / CH

3D was an institution whose roots dated back more than a quarter century, to the very dawn of TV3. Campbell Live was but a child by comparison. The show was staffed by dogged and tireless journalists who lost their jobs, without anything resembling a reasonable chance to save them, when MediaWorks abruptly canceled the show a few weeks back. It generated nothing like the public outcry that John Campbell’s ouster did. But this kind of show was the fourth estate at its most critical: a last resort when all official and judicial efforts have failed. That looks like all she wrote – but an image posted from the show’s wrap party on Twitter suggests the team aren’t done fighting. / DG

2015 was a groundbreaking year for televised farts in New Zealand, from heavily pregnant Bella on Shortland Street to The Bachelor finale’s gross cameo by an incontinent koala called Happy Jay. But the fart heard around the nation, indeed around the world, emanated from bachelorette Poppy as she sat down on a deserted beach for a rare one-on-one date with Art Green. “Did you just fart?” he asked. “I… slipped in the sand!” she replied. Poppy’s grace and good humour in the face of a five-star ‘How Embarrassment moment’ was truly admirable, even inspirational. / CH

TV3’s new late night news show started with a bang, or a roar, or more precisely with a piping hot sauna shared by weird news guy David Farrier and weird politics guy, Conservative Party leader Colin Craig, who retained a lizard-like calm while Farrier almost died of heat exhaustion. The Sauna Sessions looked to be a groundbreaking innovation in news interviewing, but after the fallout from Craig’s session – which set in motion a series of events which would see the politician dumped from his own party – nobody else seemed willing to participate in one. / CH

6) The final moments of the Shortland Street finale

Linking one of the most harrowing sequences in Shortland Street history with our most beloved light-hearted opera trio is one of the genius pairings of the year. I won’t spoil it for those who haven’t got round to watching it yet, I’ll just leave you with this quote from producer Simon Bennett: “I thought it would just be amazing to have this beautiful opera at the wedding underscoring these horrible events. Often the contrast between romantic and bleak can be really powerful.” (click here to see what he’s talking about) / AC

5) The final of Campbell Live

When you have to go all you can hope for is an exit with dignity. John Campbell was pretty much denied that through the machinations of Mediaworks management, however the final episode of Campbell Live managed to close the doors with some kind of honour mixed with sadness. It also provided viewers with an image that still haunts the sleeping mind. / JB

It was a fleeting moment during a quick and complicated dance routine, so imperceptible that it required a very special kind of perve to capture and broadcast it to his vast social media platform. The moment was Crystal Chenery flashing her underpants during an acrobatic split on Dancing With the Stars NZ, the pervert was The Edge’s Dom Harvey. What spiralled out of that one moment has now become known as ‘crotchgate’, with Chrystal’s refusal to accept Dom’s apology rallying a wave of support around her from celebrities to sweaty-palmed writers alike. With her fiery “long hair, don’t care” #sorrynotsorry attitude, Chrystal reminded us all that it’s okay to not bow down to bigoted bullshit / AC

3) Robyn falls over on Our First Home

No explanation necessary. (She was fine, btw)

I remember witnessing this moment live on television, on a day that really felt like The End of All Things – the day that it was announced that John Campbell would be leaving TV3. It was so fleeting, so simple and so powerful. Cutting back to the studio after the story covering John Campbell’s resignation, long-time colleague Hilary Barry sat, head down, voice cracking. “I think Mike might have to take this one,” she said, in the universally recognisable quaver of someone about burst into tears.

That was it, I was off sobbing into a cushion with the same gusto only reserved for Marley and Me and compilation videos of unlikely animal friendships. This was the moment that our resilient news mother couldn’t muster a brave face for the kids. A moment that encapsulated the fraught emotion around the departure of one of our most beloved broadcasters from our television screens – and no doubt added fuel to the fire of #SaveCampbellLive. / AC

This seems a fucked up thing to say about a pair of national villains, but it is also undeniable: Natalia Kills and Willy Moon were the best judges we’ve ever had on a reality TV show. Every time they spoke some new arrant oddity would spill from their throats. They were like a pair of posh aliens from the 1930s. Just preposterous people. They gave X-Factor an x-factor sorely lacking in the majority of its too-pally contestants. Kills in particular was electric.

In truth, they were the only thing that made the show worth watching. Then they wrecked it for everyone with what remains one of the most electrifying moments of live television I’ve ever seen. It was so over-the-top that it snapped us all out of the weird druglike braindeath that the show lulls you into. We got furious, campaigned and petitioned, got Simon Cowell involved and allowed Mark Weldon to play the strongman hero and fire the bastards. Unfortunately, he developed a taste for it. For the rest of the week it felt like all anyone could think or talk about, which says a lot about the moment, and about how much real news our plucky battler of a nation actually generates.

The following week though, we met their replacements. A pair of aching dullards who made sure the rest of the season would never again cause our hearts to race or eyes to widen. They were the worst people under the sun. But we’ve missed them every day since they snuck out of the country. / DG