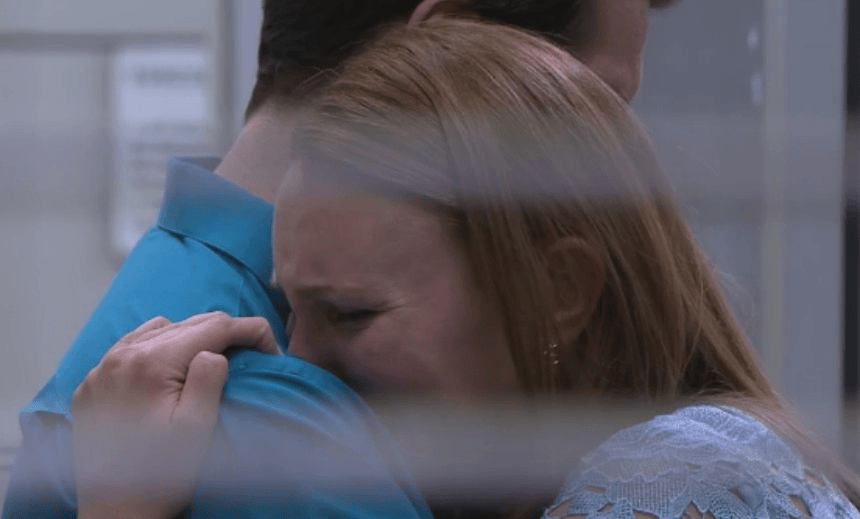 The return of Shortland Street’s “Russian doll of despair”

Alex Casey watches the return episode of Shortland Street for 2016, following the harrowing cliffhanger that left many Ferndale lives hanging in the balance.

To ease myself into the return of Shortland Street, I rewatched the last jaw-dropping five minutes of the dramatic Christmas finale. It all came back. Hairs on end, eyes prickling with tears, SOL3 MIO-induced lump firmly in my throat. The harrowing experience of seeing all our Ferndale favourites put through the bloody ringer by loony-with-a-gun Gareth Hutchins. In the safe haven of the caf no less, the birthplace of Lionel’s muffins and, more recently and for whatever reason, St Pierre’s sushi.

Beginning immediately after the final round of gunfire rained down on the hostage siege, we were met with Rachel’s crumpled face as she peered into the dusty detritus. An Armed Offenders Squad member walked out doing an unexpectedly cheery thumbs-up sign, which I think is laid-back Kiwi shorthand for “it’s all g”. She’ll be right, she’ll be number eight wire, she’ll be Wattie’s tomato sauce. The vicious Gareth Hutchins has been gunned down.

Bloodied bride Harper and her bridesmaids sprung into action, all lilac, tulle and tasteful barrettes. A clammy Chris Warner looked hot and bothered in his tuxedo. Rachel donned a glittering shawl and immediately started answering police questions like the born leader she is. This is when Shortland Street is at its best, when the whole community is galvanised towards the same daunting task. Just like putting together last season’s striptease calendar, in a way.

It shouldn’t be a spoiler to reveal at this stage that Murray’s father is dead. But as we quickly learn, the grief doesn’t stop there for the Cooper family, Murray’s been shot too. He lies in Wendy’s arms, blood-soaked and a pastel shade of green. Surely that’s the end, surely there are no more of our Ferndale friends walking towards the light.

Murray is lifted off Wendy, revealing a gunshot wound in her abdomen too. It’s a Russian doll of despair at this point. Mail me right to the morgue, the best Shortland Street family is absolutely munted at the seams. Not Murray and Wendy, surely. The couple who accidentally showed a room full of people their sex tape? Who covered their living room in soot trying to fix a chimney? Who apparently crashed a boat into a jetty? Why would they do that to us?

Bella cries out for her Mum. I’m heartbroken, blinking back tears at my desk, but I just can’t help hearing parallels in her screams with the time that lady fell over with the wheelbarrow on Our First Home. Maybe that is simply the true and pure universal reaction one has when one thinks one’s Mum is dead. Robyn on Our First Home turned out to be fine – Wendy, not so much. Sidenote: now that we have two iconic TV moments of shrieking “Muuuum” I’m calling it a meme.

While the Cooper family slowly perish in various wards across Shortland Street, everyone else was beginning to piece together their involvement in the day’s dramatic events. It’s gripping, like a live action game of Cluedo. Curtis was suspiciously faffing around with shifty eyes in back corridors (which I’m sure isn’t relevant at all, why even mention it), Victoria was busied by a passed-out diabetic man and a wheelchair, and Dr Drew was dragging himself from the conservatory to the ballroom. With the candlestick.

After talking to producer Simon Bennett last year, he said that these details become crucial to the investigation, especially when characters begin to take matters into their own hands. Which is always the heroic Shortland Street way. We don’t want no qualified police coming in here and telling us what happened, we want Chris Warner to dust for fingerprints and Leanne to do some blood-splatter analysis. It’s Kiwi, it’s number eight wire, it’s Ferndale. It doesn’t make a hell of a lot of sense, but neither does Vinny nearly drowning in a bunny suit that time.

Perhaps the hammiest moment of the episode happened when Dayna and George arrived back to reality from la-la-stolen-wedding-land. They are ecstatic, their glee particularly gauche in front of nearly-orphaned-Bella. “I’ve had my phone turned off” Dayna declares, practically down the camera, to remind the audience that there was no possible way they could know anything about the attack. It’s not like it would have stopped all of New Zealand in it’s tracks, broken the internet and had landlines ringing off the chain. No, only a Lorde break-up could manage that.

Despite some – almost unavoidable – heavy-handedness in ironing out the details, the episode showed Shortland Street slip seamlessly from the carnage and chaos of an action film into the shell-shocked aftermath and subsequent ‘whodunnit’ mystery. Chris Warner is in the OR, muttering something urgently about a heart valve, Kylie starts mapping out a Making a Murderer-style presentation in her head, Drew squeezes Harper’s hand from his comatose state. Although all has been lost, it still feels like Ferndale might be okay.

Apart from Wendy, that is.

Shortland Street airs weekdays at 7pm on TV2, click here to catch up on TVNZ Ondemand

Also, if you love watching soap families torn apart by drama, you might just enjoy the hair-pulling mayhem of Days of Our lives on Lightbox below