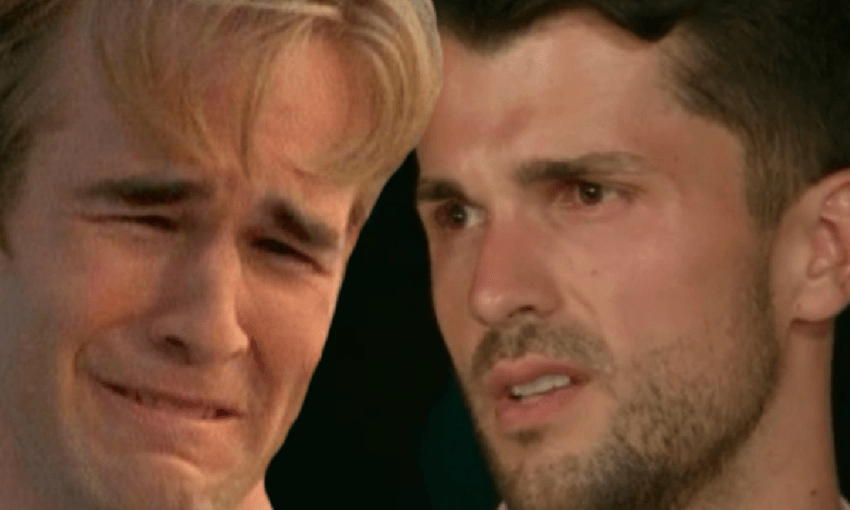 Alex Casey goes for a stroll on the foot-shaped sands of Heartbreak Island, week two.

But strategy can only get you so far, and winning the ridiculous challenges is the only sure-fire way to stay safe on the sandy foot of love. The imaginatively named “Stand and Eat” challenge forced contestants to perch on a small tree stump and feed their forever-loves chicken livers, monkey balls and live grubs using only their mouths. There was a lot of gagging, there was a lot of burping, there were a lot of beautiful people screaming “JUST SWALLOW IT” to each other. Wash that all down with a lovely mojito at the Tropicana bar, pop on your white cap to signify mischief (?) and it’s just another day in the luscious Isles of Heartbreak.

After pashing intruder Natasha in front of his (then) partner Ruby, Kristian well and truly put the boo into Bure. Jordan Peterson can’t save you now my friend.

Her secret pash with Tavita threw a grub among the Weet-Bix this week, causing Josh to join the chorus of mic drops with another shock elimination. How good was her threatening walk and talk right down the barrel though?! Serious Lecter vibes.

Can we talk for three seconds about Julius’ completely mental upside-down Spiderman trick to pull Natasha up the slippery hill of doom?? Swim home and apply for Ninja Warrior asap imho.

Everyone wanted ye but, somehow, we hardly knew ye

I take back everything I said last week. I’m all in on these two. If a fluffy chicken and a bionic chihuahua can find love, so can Georgia and Harry. They tried to keep their relationship secret for as long as they could, but Mark Dye has eyes everywhere. Georgia tried to pretend that she had only spent the night with a Daddy Long Legs, but we all know that Harry is more of a Daddy Long Legs than most Daddy Long Legs.

They didn’t come first in the challenge but put in a solid effort despite Harry getting distracted by Georgia’s a butt a million times a minute. He thinks he is pretty much Steve Irwin, and was quick to remind us of his priorities in life. “Big booty in my face, shark just down there, doesn’t get much better than that.” Fully hectic, fully cactus, fully pork chop. Harry the booty hunter is here to stay.

Lincoln was one of the intruders this week, a 21 year-old “ ex-student” who believes that “education is important, but big biceps are importanter.” The ultimate lad! The Marlborough lad! The bicep lad! Paired with oft-crier Gen, they beasted the slippery competition and came out tops. I feel good about their chances moving forward, mostly because they are both from the South Island. I am a relationship guru.

Upon coupling, these two instantly became loveless pensioners who have been married for decades too long, and I bloody loved it. Always enjoying the company of other people, always kind of distrustful of each other, but still forced to walk hand in hand along the beach to keep up appearances. Josh has even started tucking his t-shirt into his shorts for some retiree realness. He’s given up. It’s over before it even began.

After Ruby saw red re: Kristian kissing Natasha, she had a feminist revolution of her own. “We can’t let boys treat us this way,” she spat. “It’s 2018, girl power is in now.” Indeed. Giving Kristian the flick led her down the garden path to Josh, and kept her tight with Georgia and Harry. They are The Plastics. The Tight Four. The Khangkhaw, if you will.

Things were looking so good for Stayna. They were so comfortable with one another that they started exploring different head-based looks. Stacy went for an alfalfa vibe, while Shayna rocked what can only be described as a hat.

Also: this was extremely raunchy content if you ask me!

So all seemed good in the Church of Stayna. They won the eating challenge and did well tackling the slippery slope via Stacy’s ingenious “friction” theorem (sand). That was until Natasha came in and opened a can of worms – if a can of worms is bad Stacy smooching her under the pagoda. Although they stayed together, the cracks are starting to show in this Stayned glass window.

Here’s what I love about these two: Weiting eats everything in sight and Joshua seems to never close his mouth properly. During the Stand and Eat challenge, she chowed down on those grubs and sea grapes like they were delicious KFC Wicked Wings© while Joshua sweated enough to fill a small catfish pond.

When things got tense during the Passion Play Playback Plus Platypus Platitude, Weiting was the ideal commentator. “I call this D-Day” she paused, “doomsday.” They are playing it low key for now, but I hope they stick around. Also because of whatever this Magic Mike reboot is.

They saw her as an intruder. A disruptor. A snake. A can opener. They saw him as an ancient mariner, old as the hills at the ripe age of 28. A pensioner. An antique. A mummy. Somehow, they found each other in the chaos, after Natasha chose to save Tavita over aforementioned gladiator warrior Julius.

It’s been a really rough week for Natasha. She was dared to kiss every man in the room, so promptly went on a full pashing orbit. When advised that she could have turned down the dare, she replied, “nobody told me that.” I would like to reiterate here to anyone who remains unclear: if a drunk man wearing a backwards cap tells you to kiss every man in the room, you are allowed to say no.