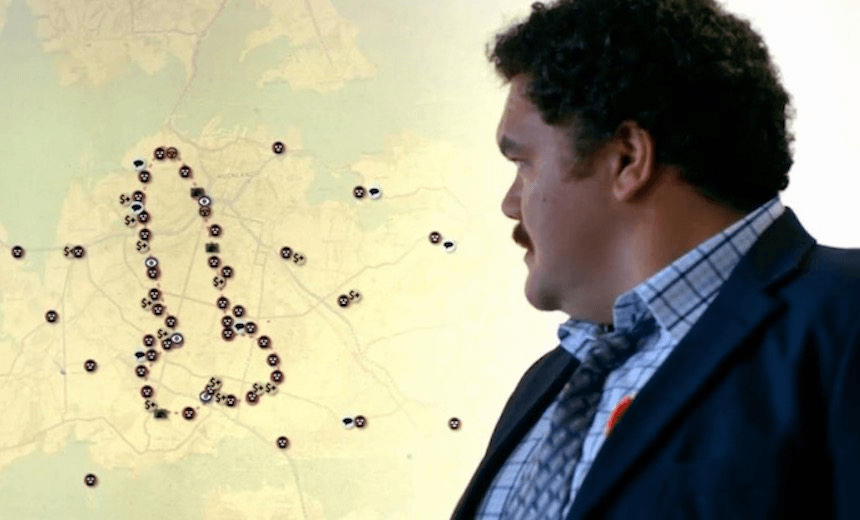 Surprise! TVNZ has decided to screen Terry Teo after all

Turns out TVNZ were just kidding about when they said Terry Teo would only play online! Those trickers!

Update: now includes a statement from the creators at the bottom.

Yesterday we published a piece scorning TVNZ’s decision to release the brilliant kidult action dramedy Terry Teo solely on TVNZ OnDemand, noting that $1.3m of public money was assigned to this as a ‘children’s drama’ in 2013. Which meant it was funded to screen in a children’s timeslot, and from the television fund. It seemed both arrogant about a vast tract of public money, and dismissive of the enormous amount of creative energy expended in manufacturing the show.

Today, I was thrilled to get an email from TVNZ head of comms Georgie Hills saying that the show will eventually air in the plumb timeslot of 7pm Sunday. In it Jeff Latch says jauntily that “we’ve said all along Terry Teo will screen both on TV and online.” Which is not what anyone anywhere near the production had been hearing until very recently. Similarly, when TVNZ got in touch with The Spinoff about the show, they said “we’ve got the new Terry Teo coming to TVNZ OnDemand from July 12th.” No mention of an eventual TV2 air date in that email…

Regardless, it’s a great outcome for the show – and it’s immensely flattering to read Hills suggesting that our Terry Teo coverage might have prompted it.

“The Spinoff’s Terry Teo pieces have been read with great interest here at TVNZ,” wrote Hills in an email to The Spinoff. “We’ve been asked by other media for our response.”

Here is that response, in full, from both TVNZ’s Jeff Latch and NZ on Air’s Jane Wrightson:

We think the new Terry Teo series is a high quality children’s drama – it’s funny, fast-paced and full of suspense and we think viewers are going to enjoy it.

We’ve said all along Terry Teo will screen both on TV and online.

We announced Terry Teo as part of our 2014 line-up but a series of production delays meant we didn’t end up receiving the episodes until May this year, almost two years later than originally intended.

When we commissioned the show we had it pegged for our 6pm Sunday night children’s drama slot on TV2. Only G rated entertainment shows can go to air at that time.

As Terry Teo contains some strong language as well as guns and violence, it’s been given a PGR rating and that places limits around the time it can air – essentially, it can’t air before 7pm in primetime.

Rather than wait until a 7pm slot came up we decided to make it available immediately OnDemand. Premiering a show OnDemand first helps us build audiences and that’s why we do it with the majority of our dramas.

TVNZ OnDemand brings a large audience – it has 1.5 million registered users at last count – and it also delivers a younger audience, which is who this series is geared towards.

In its first week since premiering on TVNZ OnDemand, Terry Teo has been streamed close to 30,000 times.  It’s building good momentum as new episodes come on stream. The first four episodes are now available, with another two set to be released on Tuesday.

We can now confirm Terry Teo will also air in the coveted Sunday 7pm slot on TV2 later in the year.

“We are very happy Terry Teo will screen in a prime time slot, as expected, but that it is also reaching audiences online. It’s a win win.”

“We are really happy that the show is getting a positive response from critics & fans & were thrilled when the future timeslot ofSunday at 7pm was announced last night.

We just wanted to clear up a few things that have been circulating:

* We were funded at the end of 2013, and by mutual agreement with the commissioning network delayed principal photography (which was originally intended to be early-mid 2014) to end of 2014.

* It is correct there were delays in delivery due to the complexity & the ambition of the project & the restraints of the budget, but 2 years is factually incorrect.  As you would expect, the network were aware of our progress and viewed WIP edits along the way.

* All of the material that was flagged as inappropriate for the proposed original 6pm timeslot was in the Network approved scripts & the approved edits.  Consequently, there were indeed robust discussions had about the prospect of material changes to the content at delivery & we’re glad TVNZ were ultimately supportive and made the right choice to keep the show as it was.”