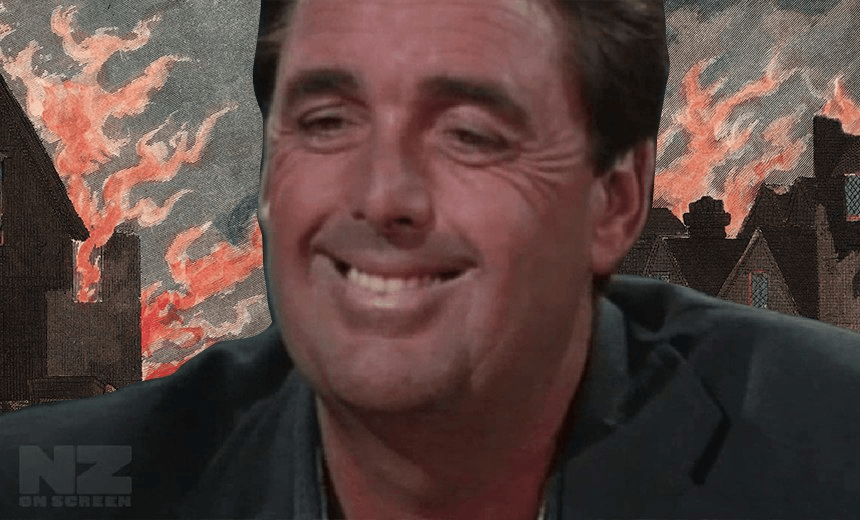 This week a “technical glitch” affected the usual smooth running of TVNZ’s One News, delaying the broadcast by several minutes. It might be rare for TV news to go off the rails and head in unexpected directions, but it has happened before. José Barbosa unpacks some of New Zealand’s most notable TV disruptions with help from NZ On Screen.

A perennial inclusion in NZ TV histories, this was the last time TVNZ news went seriously bung. I remember when it happened. The news intro failed to appear as normal, so the whole family just stared silently at the equally silent TV set. It was as if a naked man had just walked past the windows and my brother and I were trying to process what we’d just seen while our parents were thinking of ways to smooth it over. Ten excruciating minutes passed and then, like a public toilet materialising in front of a desperate gastroenteritis sufferer, newsreader Tom Bradley appeared wearing a tie made from motel curtains.

The spanner in the works was a group of five protesters who’d managed to sneak into the studio just before 6pm. The footage shows them filing up behind the news desk like they’re setting up for a class photo; the floor manager rushes in wearing huge white headphones desperately trying to herd them out. Everyone’s looking confused. Bradley is turned towards the protesters, hands held ineffectively in front of him like flippers.

We’re told by the group’s spokesperson they’re protesting the lack of Māori programming on TV. The spokesperson is none other than Ken Mair who, apart from being a national squash champion and official, became famous later that year as the face of the occupation of the Moutoa Gardens in Whanganui. The last we see of the protesters is their backs as they’re sternly escorted from the building flanked by a line of five no-nonsense cops.

Not all disruptions to broadcast are necessarily unwarranted. In 1989 the first episode of Holmes went to air. The new show was to herald something of a new era in TV current affairs: Holmes was to be a show in the American mode, mixing emotional human interest stories with the sensational, and ties made from motel couch coverings.

Holmes’ guest was Dennis Conner, the brash and commanding American yachtsman who’d won the America’s Cup race four times. Conner was in New Zealand to film a commercial for an America’s Cup board game called Cup Fever. The sailor seems calm if slightly on edge, possibly concerned about losing his pants in a beating.

At 6:22 minutes into the interview Holmes pulls out his wild Uno card. He plays footage of a press conference from 1987 where Conner leans into Kiwi yacht designer Bruce Farr’s face and calls him a “piece of shit.” “Thank you, Dennis” says Farr helpfully.

As audio of the fracas plays, the video cuts back to the studio where Conner is out of his seat looking for all the world like a trapped animal.

The moment is pure theatrics, like the contrived after-match takedown of a villain on a TV wrestling show. Conner is coerced back into his seat and even manages a quick smile, as if to say “oh, that silly thing.” It’s unconvincing.

Holmes gets out his industrial spray pump: Conner has described not only Farr as a lump of poo, but the whole country as well. “Do you think those were things that need some apology to the New Zealand people?” asks Paul. Conner aims for a smile again, but lands in a disturbing place somewhere between colon investigation and O face.

“I have to run now, so thank you for having me on your show” says Dennis. His face drops like sack of beef off cuts and he’s out the door. The camera cuts back to Paul, who bears the face of a man thinking about all the free publicity his new current affairs show is going to receive in the morning papers.

Nothing could have been more emblematic of the 2014 election campaign than Pam Corkery’s tirade to media assembled for the launch of the Internet Mana Party.

Brook Sabin copped the now infamous abuse from Laila Harré’s press secretary. Corkery was pilloried in the media, particularly by TV3’s news team. She was cast in a light that suggested she’d lost the plot, an odious yet familiar way to frame just about any woman inclined to be anything but mild-mannered.

Both Corkery’s calling out the media as “glove puppets of Cameron Slater” and the Sabin sting were unwise. They certainly didn’t do her boss any good. Nor did Dotcom’s boasting about hacking a former German Chancellor’s bank account at the launch. He was always Internet Mana’s worst enemy, a fact realised far too late. And you have to ask if we really want what Corkery seems to be calling for, a cloying or indolent press. The silver lining is that Corkery’s outburst did, at least, provide a Internet Mana supporter the opportunity to throw down a staunch-as pose on national telly.

However Corkery’s barbs had some merit. In the run up to election day the media had whipped itself into a frenzy creating nightly bouts of spectacle from the hustings. And as Nicky Hager’s book Dirty Politics showed, some political journalists were no strangers to supping at the soiled teat of Cameron Slater. Her frustration was not hers alone.

Throwback Thursday is brought to you by NZ On Screen. Click through to watch more classic moments from NZ television news.