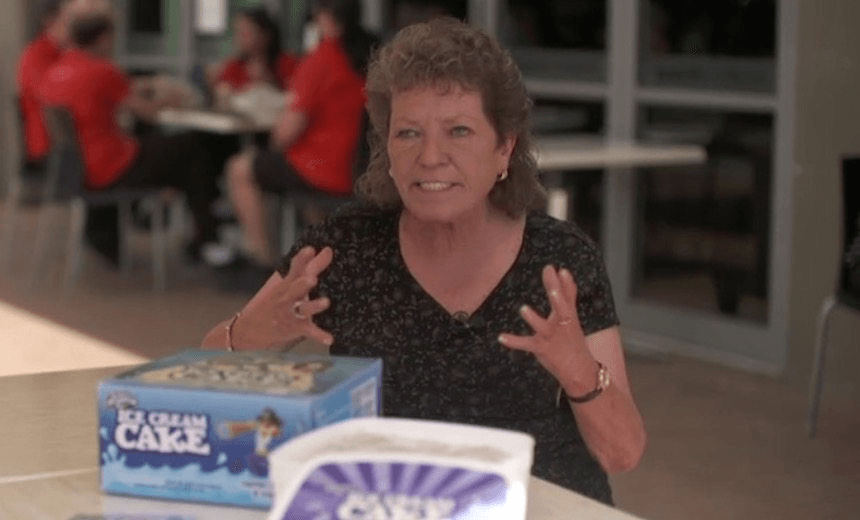 Duncan Greive settles down to a nice night of linear television in front of TVNZ 1’s Fair Go and Mind Over Money.

Like many people under the age of 40 – and a large portion of those older – linear television has almost entirely given way to on-demand in my viewing habits. Linear, scheduled television can feel quaint, a prior form of human behaviour still lingering while a superior product works its way through generations, until the tipping point arrives when it ceases to be economic to broadcast it anymore.

Still, I found myself exhausted in front of the television on Monday night, and the idea of scrolling through line after line of shows on Netflix or Lightbox filled me with a specific form of modern and highly privileged dread. And so I decided to head back through the mists of time and turn on the venerable old warhorse TVNZ1 (née NZBC TV, TV ONE and ONE) and watch a pair of shows which appear emblematic of the vanishing world linear represents.

Fair Go and Mind over Money – the new Nigel Latta docu-series – are some of the last remaining vestiges of the public service ideal of broadcasting, each with a kind of edu-tainment quality to them. Fair Go in its forever quest to inform its viewers of the Consumer Guarantees Act, while Latta’s new series attempts to teach financial literacy by way of some pop economics and psychology. Perhaps surprisingly, both were fun and fresh, as well as having sensibilities deeply rooted in our national psyche.

Debuting 40 years ago, Fair Go is a hall of famer, trading on two key national traits: a desire of justice to be status blind, and a kind of proud cheapskatery. The show has always been a big ratings winner made on the cheap, and thus able to splash out on heavyweight talent. This has included founder Brian Edwards along with Kevin Milne, Ali Mau, Kerre Woodham and Carol Hirschfeld in the past. Today that remains true, with Pippa Wetzell starring alongside Hadyn Jones.

The pair ran through a series of dodgy deals and dire situations. Turns out prominent New Zealand wineries which have been sneakily filling their boots with “cheap Aussie plonk”! This was countered by a quite brave and thoughtful interview from Whitecliff’s David Mason, who described the financial realities of meeting the price points demanded by supermarkets and consumers.

The best segment by far involved Glenda McSkimming, the kind of character which shows like This Town and Neighbours at War build their franchises on. She bought an ice cream cake which was basically just a tub of ice cream, and called in the consumer cops at Fair Go to do something about it. “Never mess with a Scorpio when she’s pushed to her limits,” she said with a sharklike grin, and no one watching could disagree.

It was a perfect lead-in to Mind over Money, the latest in Nigel Latta’s endless parade of factual series, though with a modern twist. That is, despite its clear public interest formulation – getting people to be less dumb with their money – it was funded not by NZ on Air, but by Kiwibank. The branding was subtle, limited to throws in and out and a familiar bright green colour palette, and presented a vision of sponsored content for television which felt a lot more sophisticated than the likes of The Block or Our First Home.

Latta has done a lot of this stuff: shows he’s fronted have received over $7m in NZ on Air funding over the last decade. But we’ve got a huge amount for it: 13 seasons or so of mostly good-to-great TV. By comparison, $7m is often less than the budget of a single season of premium local drama, or two Sunday Theatre telemovies.

Over that decade Latta has become very skilled at taking unwieldy and complex topics and distilling them down into accessible chunks, ably illustrated by well-thought out interviews and set pieces.

Mind over Money essentially functions as a simplified version of the likes of Freakonomics, Nudge and Thinking Fast and Slow, a range of popular non-fiction books of the past few years. Sometimes it felt a little too basic, but more often it was breezy and amiable way to think about concepts our minds tend to do anything to avoid contemplating.

It thus performed an old-fashioned public service function on a channel which is often (and rightly) derided for having abandoned that ethos, while being funded in a very modern way. And both shows, which screen in primetime on TVNZ1, show that while linear television might be on the way out, it’s certainly not – as some headline writers would have it – dead yet.

Fair Go and Mind Over Money air on TVNZ 1 Mondays from 7.30pm