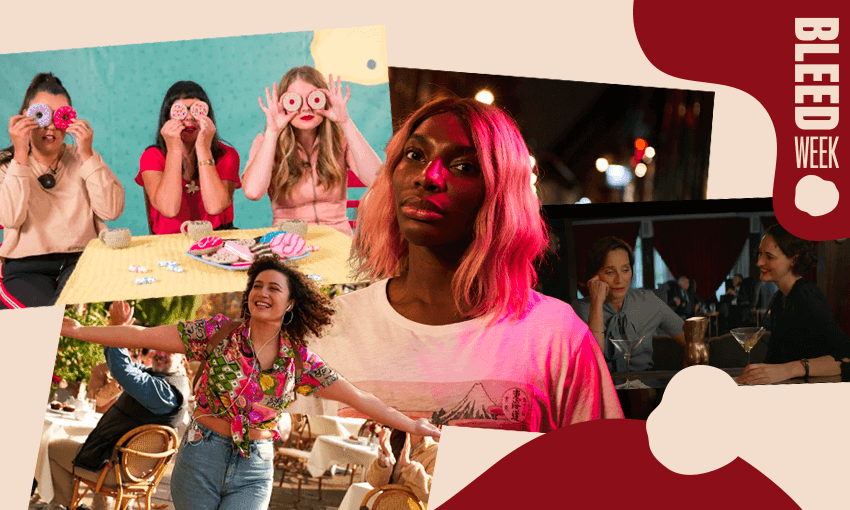 Ten of the greatest period moments on TV

Ever since Courteney Cox became the first person to utter the word “period” on American TV in 1985, our monthly cycles have held a weird place on television. Periods have been portrayed as an awkward mix of women in white togs running along the beach, or men doing weird stuff with sanitary pads, or blokes using tampons as cat toys. It’s no wonder we got steaming mad about the way periods were depicted on the telly.

But more recently, television shows have embraced the flow and started normalising periods in refreshingly honest ways. Rather than shrouding menstruation in shame and secrecy, these shows are shattering period taboos by bringing bleeding into the light, one scene at a time. It’s powerful, it’s groundbreaking, and it’s about bloody time. Here’s ten of the best period moments to have ever graced our screens.

The bloody joy of On The Rag: Periods

The first episode of The Spinoff’s feminist doco series On The Rag covers everything from the Māori world view on periods to period TV ads. It also features Alex Casey, Leonie Hayden and Michelle A’Court using hand-knitted biscuit props to explain how the body works, which is the biological lesson we all need. On The Rag breaks down the stigmas around menstruating, and does it in a smart and sassy way that feels like having a natter with your best mates.

Is period sex the last taboo on TV? Not any more. The period sex scene in Michaela Coel’s incredible comedy-drama I May Destroy You (available on Neon) shows the realities of periods without making a big deal of it, which is extraordinary in itself.  In one episode we see Arabella (played by Coel) put on a new sanitary pad, and later when Arabella tells her lover Biagio they can’t have sex because has her period, Biagio doesn’t think it’s a big deal. In the beautifully gentle scene that follows, Biagio becomes fascinated with a blood clot. That’s right, there’s a CLOT on your SCREEN, but there’s no shame here.

It’s rare that menopause gets a shout out on television, let alone in a positive light, which is why Kristin Scott Thomas’s soliloquy in the second season of Fleabag (available on Prime Video) is so remarkable. Scott Thomas plays Belinda, a 58 year old businesswoman who tells Fleabag (Phoebe Waller Bridge) about female pain and the power of menopause. Yes, your pelvic floor crumbles, but menopause also brings the freedom of no longer being “a machine with parts”. Women on our screens celebrating the ageing process? More, please.

Dark comedy Creamerie (available on TVNZ+) may be set in a dystopia where a viral plague has swept the earth and killed all the men, but a fun festival celebrating the “us in every uterus” should exist in every society. Creamerie’s slightly twisted SyncFest features a life-sized dancing moon cup, red flags everywhere and a ferris wheel representing our never ending menstrual cycle. It’s literally one hell of a ride.

Laugh until your uterus wall burns at Funny Girls’ take on a young woman’s first trip to the tampon store or the terror of being arrested for the heinous crime of mentioning your lady business at work. Also, when will period headwear become trendy again? Asking for a friend.

Libra’s 2019 prime-time campaign wanted to normalise periods, but it seems nothing pisses people off like menstruating women living their best lives. For the first time on television, these ads poured red liquid (instead of the traditional blue Smurf blood) onto a sanitary pad, provoking over 600 complaints to Ad Standards in Australia and two to New Zealand’s Advertising Standards Authority. The New Zealand complaints were not upheld, probably because the complainants filled in the form with blue ink instead of red.

“You do know I’m an adult man, don’t you?” It’s one of the first signs that Tom might be the perfect guy in Starstruck (available on TVNZ+) after Jessie (Rose Matafeo) tells him they can’t get up to any funny business because she has her period. Wait, he’s not bothered by something natural that happens to 50% of the population? Love to see it.

About Bloody Time’s unflinching look at the impact of periods

It’s not just the fictional TV world trying to normalise periods. As freelance researcher Rachel Judkin neared her 40th birthday, she made a short documentary about the shame and secrecy she felt about her periods every single month. After having so much of her life defined by an unwavering cycle of hormones and heartache, Rachel was determined to find something about the whole bloody mess to celebrate – and she did.

You don’t often hear people talk about period sex on an American sitcom, let alone making a song and dance about it, but that didn’t stop My Crazy Ex-Girlfriend. This musical number about the ins and outs of period sex didn’t make it into the show itself, but creator Rachel Bloom instead released the catchy number online where it will last a lot longer than 5-7 days.

Sure, they’re not technically TV shows, but these period-related podcasts are still music to our ears. Showy Ovaries is a series in which comedian Penny Ashton delves into the mysteries of menopause, while the eight-episode The Period Place discusses periods through the lens of a variety of topics, including gender, te ao Māori, and period poverty. Wrap your ears around them immediately.