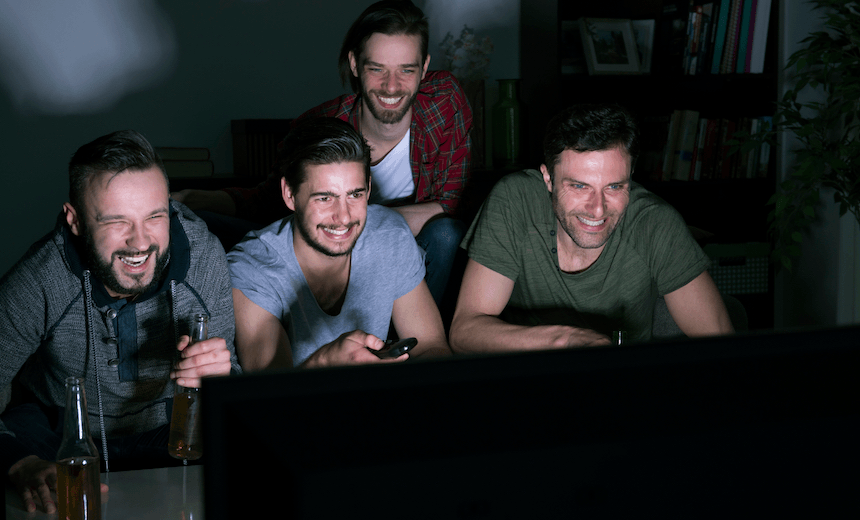 Hey guys! Big news! Men got something else today! A nice big roomy TVNZ channel especially for them. A lad’s night channel. A Dad bod channel. A man cave channel. A “male skewed” channel that, if it had to be embodied in a Family Guy screengrab, would feel a lot like this:

“The new channel’s development has been informed by market insights that indicate male viewers are seeking more distinctive content,” the press release read. This would include a plethora of top drama, sport, comedy, factual titles and movies.

Hey! I like those things as well! No fair! I spoke to TVNZ Chief Executive Kevin Kenrick about what all those empty words actually meant, and what this distinctly male channel might look like. We spoke for 15 minutes, during which I noted that he sounded distant, figuratively and literally. His answers were repetitive, all advertisers this and markets that. He was definitely on speaker phone. I did wonder just how many people I was talking to at the time.

“It’s distinct from what is currently available that we’re offering,” he told me this afternoon. “From a free-to-air channel perspective, they all skew more towards female than male.”

Turns out us greedy old chickadees are enjoying the majority of TVNZ content, with a 60-40 female-male split across both TV One and TV2. Got to do something to fill the ol’ wage gap void, I guess. Got to fill some time while the ol’ husband’s fighting the ol’ war and we’re cooking the ol’ stew.

“The motivation is all about a market opportunity,” said Kenrick, “the feedback from viewers and advertisers has identified a gap in the market.” God FORBID men don’t get an equal share – imagine if they didn’t get equal access to everything ALL THE TIME.

To fill men’s crushing, oppressive, discriminatory gap of having slightly less telly to watch, TVNZ’s newest channel will look to provide more content for dudes. I asked if that will include Home and Away, Bachelor in Paradise and RuPaul’s Drag Race, shows that I can personally vouch for several men enjoying immensely.

“We expect it to be a broad appeal channel that will skew towards male,” Kenrick replied, not answering the question. “It’s not an exclusive male channel, in the same way that whilst existing free-to-air channels skew female, there’s a lot of males that view the same content”

If any of those shows mentioned are on this new channel I swear I will print out this article and eat it.

Another enormous draw card for the new channel will be free-to-air sport, because women hate that bloody malarkey and we have so much Ellen to watch that there’s just no time with the hair and the makeup and the periods. Kenrick maintains that sport can be enjoyed by both men and women. “There won’t be anybody checking gender at the door and saying ‘you come in’ and ‘you can’t’.” But the truth is, it definitely matters who comes through the door. If it’s all chicks, then that will throw the figures for advertisers.

It’s like having the door of the man cave open, with a nonchalant sign that says: “Come in, if you want. I don’t care, you just might not like it, I mean, whatever, do what you want, it doesn’t actually affect me. But there’s no beers left and some of us are in our undies,” Would you still feel like you were welcome?

I asked if Kenrick felt like men might have enough stuff in the world already. He recycled the previous answer. “Men are harder to reach from an advertising perspective, so there is demand from a commercial point of view to deliver that audience. There appears to be an unmet need, hence why we are interested.”

Remember Heartland? TVNZ 7? Channel U? All those other channels that filled a much more interesting and ambitious cultural void than just rubbing men’s telly belly?

Here’s a thought: instead of giving more room to men, why not work on making television a space where women can be heavily pregnant and still present the sport without getting hate mail? Where female reporters can bear their arms without breaking the dress code? Where it isn’t surprising for a woman to know something about rugby?

Surely that’s not too much for us greedy women to ask?