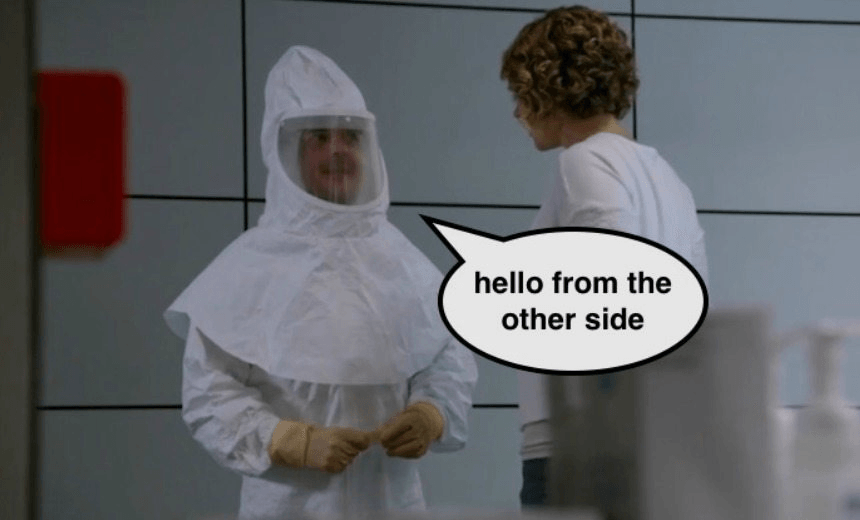 Shortland Street Power Rankings – Should Damo be the new mayor of Ferndale?

“I’m not made of fingers, Damo!” The strain of being a drug-dependent alcoholic who couldn’t make her computer print got to Rachel, and she began to unravel like an out-of-control toilet roll.

Who told Rachel that she IS actually made of fingers? I point the phalange at dipshit Glen, who’d convince Rachel she was made of fruit toast if it meant he could score another sneaky snog.

Facing police charges for Careless Pashing in a Motor Vehicle, Fingers McKenna turned to old mate Codeine for comfort. Was staring into Chris’s concerned eyes not solace enough? They’re like deep, warm pools of trust that make me want to put on my floaties and belly flop right in.

2) At last, someone treats the Mystery Virus with the respect it deserves

3) TK swoops in and saves the day, again

TK floated aimlessly in the murky sea of life without a woman to anchor his misogyny to. Luckily, patient Trina had the hots for McSulky, and heeded his advice to stop stripping and get a proper job, preferably one that involves ironing his shirts.

Just as all of TK’s domestic fantasies were coming true, a mystery person sent Trina threatening messages. What terrible luck! If only there was a handsome doctor nearby to protect Trina from this invisible danger!

Will the life-sucking powers of the Mystery Virus never end, or is this just a cunning ruse by TK to get someone to clean his oven?

4) Blue overcomes the terrifying powers of the Mystery Virus

Stone the flaming crows, that untested, untrustworthy Australian anti-viral juice was just the tonic. Good on ya, Straya. He’s alive, ALIVE I TELL YOU!

Leanne was all “YOLO” about a facelift until the anesthetic failed and she lay paralyzed on the operating table. To make matters worse, Boyd made Leanne “wee, willy nilly” into a cup to prove Phyllovite is pure Vitamin Methamphetamine and that Leanne is a souped-up junkie who supplied Class A drugs to rest homes and high schools.

Chin up, Leanne. It’s not like you’re made of fingers, or anything.

Put your thumb away, Jim.

Look at these little feckers, high on hormones and Phyllovite smoothies instead of failing their National Standards or School Cert or whatever it is kids do these days. Someone call Hekia Parata, ASAP.

8) Lucy gets a new flatmate

Lucy was thrilled that Esther invited Damo to be their new flatmate. “He’s a freaky, creepy, douche geek,” she bellowed, as Damo’s dazzingly white thighs made themselves at home. “He’s as funny as Chlamydia, and I also think he’s made of fingers.”

Damo cooks and cleans, has more shiny appliances than a Noel Leeming outlet store, and knows the difference between ASDL and VDSL. Forget being flatmates, Damo should run for Mayor of Ferndale.

“This is NOT what my wife is made of”. You tell him, Chris. #warnerproblems