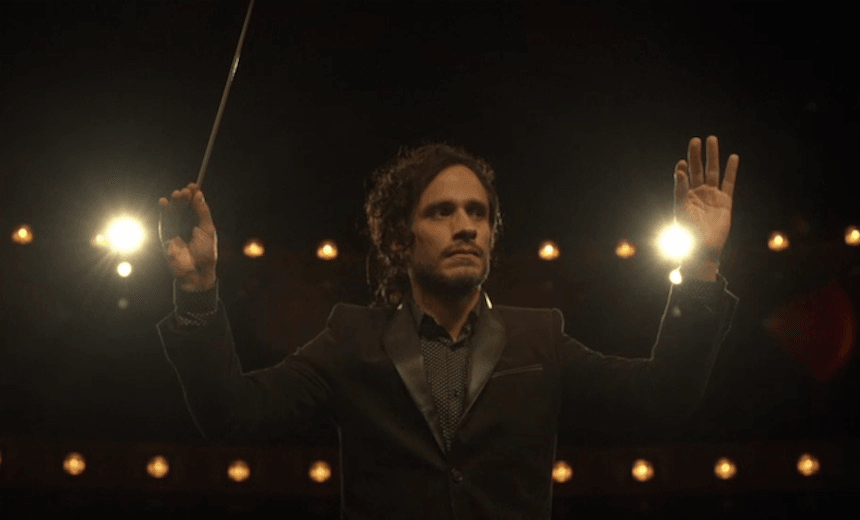 By Lindsey Dawson
Guest writer
Made possible by

Lindsey Dawson has been binge-watching Mozart in the Jungle. Despite being about fuddy-duddy music, it won two Golden Globes this year. She can understand why.

The New York Symphony Orchestra. It sounds grand but this fictional institution is fighting to maintain reputation, cash flow and audience.

Enter ageing maestro Thomas, played with silver-foxy egomaniac aplomb by Malcolm McDowell. He’s having to step aside for the new boy on the rostrum, upstart genius Rodrigo – dubbed “the shaman with the baton”. Mexican actor Gael Garcia Bernal owns this role and won a Best Actor Golden Globe for being so good at playing, by turns, tortured soul, sexy beast and Jack Sparrow-ish rogue.

Running the whole rocky show is Bernadette Peters as board chairman Gloria. With steely support lingerie to give her serious up-thrust, she hustles for funds from geriatric millionaire donors. Obliged to host hideous fundraiser cocktail parties bristling with rich widows, martinis, diamonds, snobbery, gossip, pearls and air kisses, Gloria is also fending off demands by petulant musicians for better pay and conditions.

Mozart in the Jungle looks past the penguin suits, modest black dresses and stuffy conventions to reveal the messy turmoil at the orchestra’s heart. Sharp, fresh and funny, it also scored the overall 2016 Golden Globe for best comedy series. Must be time you tuned in, huh?

It’s got all you need for a satisfying, witty, slightly cerebral and smile-inducing binge watch. Settle down with a good glass of wine and your iPad to suck up some bitchiness, hilarity, blackmail, sour grapes, career fear, love and lust, along with snippets (never long enough) of gorgeous music.

Rodrigo has a nickname for almost everyone – he calls Hailey “Highligh”. Or is that a play on Jai Alai? Okay, it’s a slightly obscure ball game invented in the Basque country 400 years ago and now popular in Latin countries. No one is going to explain that to you on this show. Which is partly why it has so much going for it.

It’s also a celebration of New York street life. None of your usual sanitised tourist scenes either.  If you’re in Central Park the camera shows you pooping dogs and decrepit invalids as well as cool groovers. It’s an inclusive kind of show, age-wise. Veteran musicians include a bumbling drug dealer, and there are no rules that say oldies must be sweeties, as in this caustic smack-down of Hailey from a senior rival: “I had tits once. I just didn’t play the oboe with them.”

One senior lady’s birthday party goes off when a surprise stripper arrives. He rips off wig and satin breeches to reveal a gold G-string and announce himself as “Johann Sebastian Cock!”

There are colour-drenched episodes set in Mexico too. It’s a peek so gorgeous you really, really want to go to the Pueblo Magico. Although (vomit alert) you might want to think before buying street food from dodgy Mexico City stalls.

In Series 2, actual classical stars have cameo roles – such as pianist Lang Lang, who lets fly with a glorious improv version of Liszt’s Hungarian Rhapsody No. 2.

Some whimsy kicks in with ghostly pop-up moments involving long-dead composers. Beethoven, famously deaf in later life, drifts by to tell Rodrigo not to worry about that noise in his ear. And it turns out that Mozart is handy with inspirational quotes, such as: “A man of superior talent will go to pieces if he remains forever in the same place.” It’s bound to turn up as a Facebook quote, imposed on a pretty sunset, any minute now.

What do you need to know?

One Guardian reviewer reckons that making maestro Rodrigo out to be a pop-culture celebrity doesn’t work in a time when most people can name all the Kardashians but not one conductor.

But the guys who created MITJ know how to make characters beguiling. Paul Weitz (About a Boy), cousins Roman Coppola (son of Francis Ford Coppola) and Jason Schwartzman, and theatre director Neil Timbers, have crafted the show in 30-minute episodes.

They based it on a memoir, Mozart in the Jungle: Drugs & Classical Music, by real oboist Blair Tindall, a former New York Philharmonic member. While the show is technically a comedy, it has heaps of heart and drama. Weitz says it’s really about ‘the great passion of art’ and Rodrigo’s advice to his orchestra is that they must ‘play with the blood’. There’s a whole lotta devotion to bringing yesterday’s music to today’s Taylor Swift-obsessed world.

“We are not eccentric, kooky and weak-kneed. We are world-class musicians,” a union organizer tells downcast colleagues. “We have chosen this to be our lives. We have chosen a profession which is hard on relationships, hard on our bodies, and which requires constant practice and dedication – which hardly anyone else understands!”  That doesn’t mean the musically gifted can’t be mean as hell. Here’s how a guest conductor tears someone’s performance to shreds: “That was sweet like a birthday cake. I hate fucking birthday cakes. I want a steak!”

If (like me) you hear brief clips of classical music on the show and think, ‘oh, I love that piece but what the heck is it?’, you can find them all right here at Tunefind. And, by the way, the Season 2 opening credits are a thing of beauty. Different for every episode, they should be required viewing for every graphic design student.

Seasons 1 and 2 are streaming on Lightbox now. Mozart in the Jungle is an Amazon production. They’ve just announced there’s a third season on the way.  Please, please, may it happen. And as they say on that other bitchy but just as colourful New York production, Project Runway, “Make it work”.

Get front row seats at the best show in town by clicking below to watch Mozart in the Jungle, exclusively on Lightbox