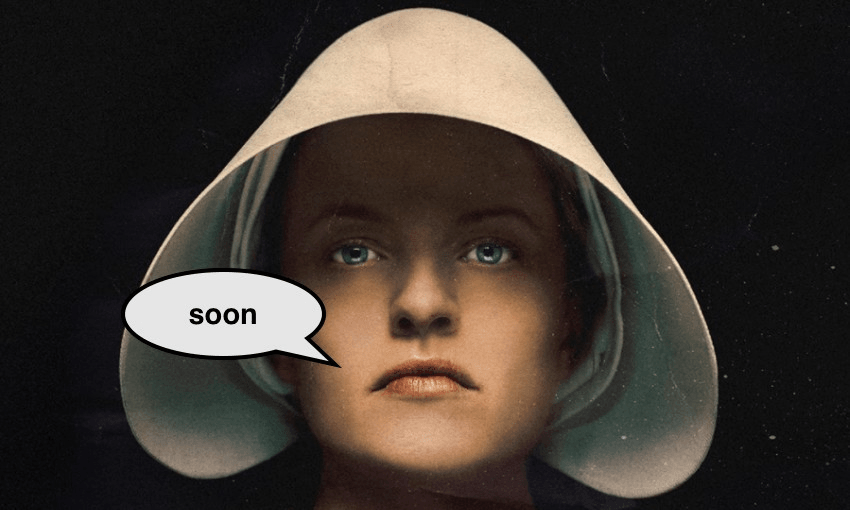 With The Handmaid’s Tale season two arriving exclusively to Lightbox on Thursday, Alex Casey assembles a handy list of ways you can bide your time.

What I can tell you is that you should all be amping for the return of June, or Offred, when her quiet rebellion in Gilead returns to exclusively to Lightbox on Thursday 26 April.

There are still two full days free from dystopian drama – if you don’t count the real world – to wait until the two episodes drop, so I devised this handy list of things you can do to get prepared for the return of The Guardian’s number one show of last year. Get your bonnet starched, your robes ironed, and let me count the ways.

Yes, it’s bleak and chilling and distressing, but by GUM does the Handmaid’s soundtrack rock. “When you’re in Gilead, you totally forget there was a past, so we slam into the flashbacks with music that’s loud so it jars you out of Gilead to this feeling of, ‘Holy shit, there was another life before this,’” music supervisor Michael Perlmutter told Vulture. From this freaky ass version of ‘Heart of Glass’ to ‘Fuck the Pain Away’ to ‘Don’t You Forget About Me’, prepare for season two by assembling the ultimate playlist. At least the road to hell is paved with tuneage!

Read the book in one sitting

If you are yet to go out of your way to pick up an ancient manuscript that our ancestors once referred to as a ‘böök’, now is the time. First, read this piece by Sophie Smith about why reading The Handmaid’s Tale in 12 hours changed her life. Then, grab an Uber horse and cart out to your nearest artisanal papyrus vendor.

Play Scrabble with someone you really hate

Just an idea. Not a good one. But an idea nonetheless.

Realise stuff and think about stuff

The internet has no shortage of content about all the ways The Handmaid’s Tale is too close to reality, including here on this website. Read this piece from the BBC which features Atwood herself throwing down the cold hard facts. “One of my rules was that I would not put any events into the book that had not already happened… nor any technology not already available. No imaginary gizmos, no imaginary laws, no imaginary atrocities. God is in the details, they say. So is the Devil.” Head over to Time for this excellent piece about the urgency of The Handmaid’s Tale. “Just months after filming the show, Trump won the election and protesters at the Women’s March carried signs that read, ‘Make Margaret Atwood fiction again.’”

Symbolic of the oppressive hierarchical system in the Gilead, and also just very delicious if not a tad overexposed on Instagram, this orange macaron appeared in season one to remind us all of The Old World’s luxuries. For any Handmaid’s party, they’ll be your extremely sugary go-to snack, so best get whisking. PS: they are bloody hard to make though, just ask everyone on the internet.

It’s what the cast and crew did to lighten the mood on set while filming season two, even enlisting a fan in one very serious Joseph Fiennes. Jordy Pordy round two, anyone?

With one of the central messages of The Handmaid’s Tale being “don’t let the bastards grind you down”, it’s only fitting that the show’s star Elisabeth Moss throws some swears around elsewhere. Exhibit A, when she wore shoes that assumedly said “fuck” on one sole and “off” on the other to the Emmys:

Or just the other day, when she instagrammed herself wearing a charming pair of delicate earrings that, if you squint very hard, clearly say “fuck you”. Atta girl.

Binge season one again, if you can handle it

Here’s a tip: it will only take you a cool 10 hours to watch season one of The Handmaid’s Tale in its entirety. With over 48 hours to go, that’s heaps of time you lazy. That’s just like a flight to Singapore! A slow cooked pork roast! A walk from Lower Hutt to Featherston! Where the bloody hell are ya??

Click below to watch The Handmaid’s Tale exclusively on Lightbox, with season two arriving on Thursday 26: