Australia Week: It’s the age-old question: which fictional soap neighbourhood would you most like to live in? We know you’ve thought about it, but Tara Ward has thought about it more than most.

The real world is fun, but have you ever tried pretending you live in a soap? I love using my free time to imagine I live in a charming seaside town, where I spend my mornings fighting petty crime and my afternoons getting married at the local surf club. Some might say I’m wasting my life, but to them I sing “you and I belong together, you and I forever and ever” and then quietly back away, and everyone is happy again.

And in the week when Australia and New Zealand joined together in travel matrimony, a question has been playing on my mind. Who rules supreme in the Antipodean fictional soap stakes? Would we be happier living in Shortland Street’s Ferndale, the leafy Auckland suburb with the greatest, busiest hospital in all the land, or should we surf across to the golden sands and shimmering seas of Home and Away’s Summer Bay?

Adulting is hard, but sorting fake places into real categories is easy. There can only be one winner, and the evidence is clear. The Parata whānau, the first Māori family in Summer Bay

If geographical areas had to wrestle, everyone knows a bay would beat a dale, hands down. That’s life, and that’s why the idyllic seaside paradise of Summer Bay kicks Ferndale’s sorry suburban arse. It’s not just the sea or sand, or the close proximity to the delightful metropolis of Yabbie Creek. Summer Bay is a land of eternal sunshine, whereas Ferndale just has ferns and road rage. Ferns are damp and shed all over the ground, but summer? Summer never did anyone any harm. THE DINER IN SUMMER BAY. MISS YOU, COLLEEN

The diner rules supreme in soapland, and legend says if you order a thick shake and stare directly into the midday sun, you’ll hear the ghost of Colleen scream “hoo-roo, only me” from across the water. Stop it Colleen, you’re giving me goosebumps.

Summer Bay also has the classy bistro Salt, where shady strangers with links to organised crime serve you pizza. You’ll probably end up accused of murder if you linger too long, but when you’re released on bail you can head to the Surf Club for a Cornetto and a pash on the pool table, because this is what living in the land of plenty is all about.

Sucks to be you, Ferndale. A carpark coffee cart and a pie-warmer in the hospital caff doesn’t come close, even if Ed Sheeran did visit the IV to strum his new guitar with KJ Apa. Alas, Summer Bay did one better, because Marilyn used to be Ed Sheeran’s nanny back in the UK. She didn’t even know he was famous! Ugh, Summer Bay is the popular kid at school that we’re starting to resent. 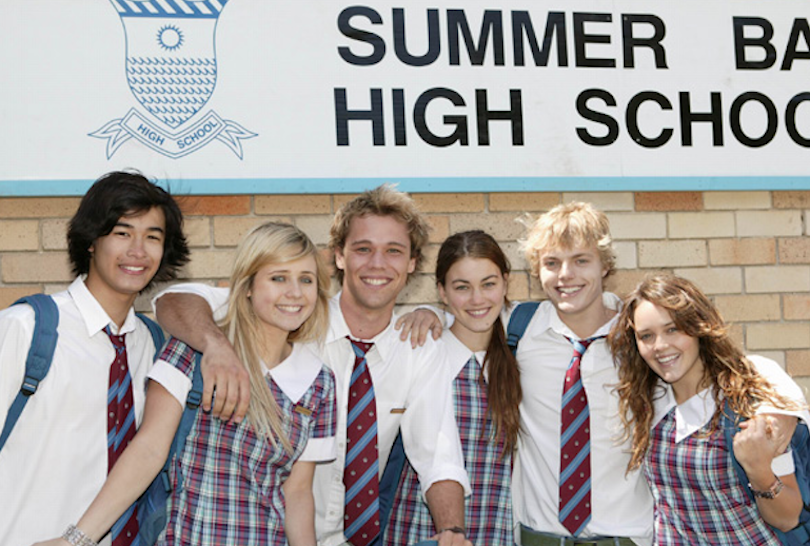 SO HAPPY TO BE LEARNING

Both Ferndale High and Summer Bay High are disaster zones. Your children will learn nothing there, other than how to be traumatised during a hostage situation or to hide drugs in other students’ lockers. Is it you or is it me? Stop asking questions, no one knows the answers. We’re unsure how the new health reforms will impact our favourite hospital, but you couldn’t be in better hands than the dedicated team at Shortland Street. Yes, one of their doctors was a body snatcher, and yes, they’ve employed several murderers, but there’s also a medium-to-high chance they’ll cure your amnesia or botched boob job to a level sufficient to avoid litigation. Remember the time Grace Kwan saved a life by performing a tracheotomy with her Star Wars pen? Irene Roberts could never. This was a close call, because both Summer Bay and Ferndale are terrifying hotbeds of criminal activity. Summer Bay had the surfie gang River Boys and Ferndale had serial killer the Ferndale Strangler, but the forensics have been analysed and New Zealand wins by a kidnapping, a bombing and a truck crash through hospital reception. What can we say? We’re bad and we’re proud. The King whānau of Ferndale

Ferndale is home to a diversity of voices and cultures and Shortland Street is renowned for its progressive approach to reflecting New Zealand society, now with at least a third of Ferndale populated by Māori or Pacific characters. While Summer Bay welcomed its first Māori family last year, Home and Away has only ever featured three Australian Indigenous characters – one who appeared in Alf Stewart’s dreams – leading to recent criticism over the lack of cultural representation in Australian soaps. THAT TIME IT RAINED IN SUMMER BAY

Apart from the eternal sunshine, Summer Bay’s forecast includes storms, cyclones, floods, earthquakes and bushfires. The same goes for Ferndale, where one time it rained so much the characters had to carry umbrellas inside. Hectic times.

Stone the flamin’ crows and say g’day to Alfred James Stewart, soap’s most iconic character. Ferndale’s Chris “please tell me that is not your penis” Warner comes a close second, but no amount of silky locks will ever topple The Stewinator. He’s grumpy, he loves a rant, and don’t get him started on those “long-haired, greasy, left-wing yahoos”.


Rude? I’ll show you rude. Erinsborough’s Karl Kennedy wishes he had an ounce of Alf’s style, while Coro’s Ken Baldwin cries into his pillow each night because they won’t let him say “flaming galah” in the Rovers. Closer each day, Alf Stewart.

I’m sorry for what I said about the ferns.

In the latest episode of Remember When… we’re looking back on the nice, different, unusual Australian television masterpiece Kath & Kim for Australia Week. Subscribe and listen on Apple Podcasts, Spotify or your favourite podcast provider.