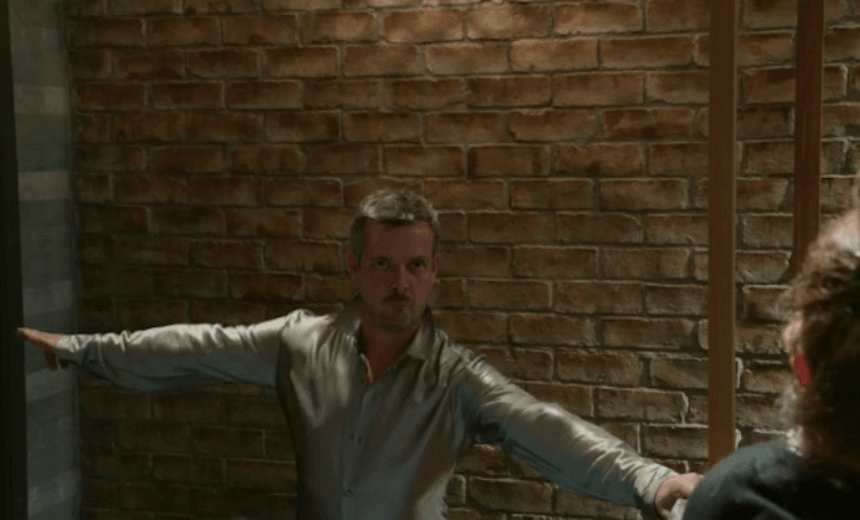 Tara Ward brings you her Shortland Street Power Rankings for last week, including a web of hairy lies, Victoria’s restless hands, and the return of the mighty Damo.

1) The claw of catastrophe returns

Yaaaas, Shorters is BACK. Last week I lamented the lack of action, but this week there’s been more drama than a room full of hangry toddlers AND I LOVE IT.

Who should we thank for the return to form? Victoria Anderton’s twitchy digits, that’s who. For months Victoria’s hands have been limp weights at the end of her arms, yearning for their glory days when they fired a gun, planted evidence, and slid their way over Drew’s silky smooth head. It was only a matter of time before those toxic phalanges wreaked havoc again.

BOOM! Run for your life from the Freaky Mitts of Tor! Also, RIP cute retro caravan.

2) Damo dances into our lives like Danny Zuko on heat

“You’re certainly no pig,” Damo told Kate, as he tried to win her over with 100% old school charm and romance. After matching on Tinder Kinter, Damo pulled out all his moves to tango his way into Kate’s heart and/or pants (probably not picky). Alas, his efforts were in vain. “I rub women up the wrong way,” he lamented, crying into his garlic bread. “Not actual rubbing. I don’t get the chance”. Keep the faith, Damo.

Being pretend-pregnant didn’t stop Victoria from stalking Mo on his camping holiday. She lurked amongst the native pittosporum and matagouri, and trampled over endangered flora and fauna in her desperation to discover the truth about the Hannah holiday. (Playing cards! Doing dishes! Discussing how Victoria is batshit crazy!).

She tried to gas Margaret to death, then she murdered our precious native forest. IS THERE NOTHING THIS BEAST OF A WOMAN WON’T DO?

Great news! George’s extra anatomy studies paid off. He finally located his spine, meaning Ferndale’s hairiest spider was – at last – brave enough to reveal to Dayna his pathetic web of lies. “I’m not really a doctor, and I used your money to buy fake qualifications,” he admitted. “I also used your toothbrush. Please don’t leave me, I’ve nearly finished growing my man-beard.”

5) Nicole, for her Damo impersonation

The likeness is uncanny.

6) Margaret colour coordinates her way back into the Hannah family

Margaret’s return was like a bad case of athletes foot – itchy and annoying, yet curiously endearing. But the family that matches their clothes together deserves to stay together, and if it wasn’t for the crime, the lies, the secrets and the psycho girlfriend, this would be the best family photo opportunity since Rangi and Donna discovered they were lovers AND siblings.

May the gods of hospital reception desks forever bless Leanne with an endless stream of verbal diahorrea.“He’s like a gnome with Tourettes,” she cackled, as she feasted her beady little eyes upon Damo’s dance routine. Jealous much?

Or maybe Guy from Green Wing? Answers on the back of an envelope, please.

9) Damo, because once is not enough

What a glorious specimen of a man. Drink it up, my friends, drink up all the Damo.