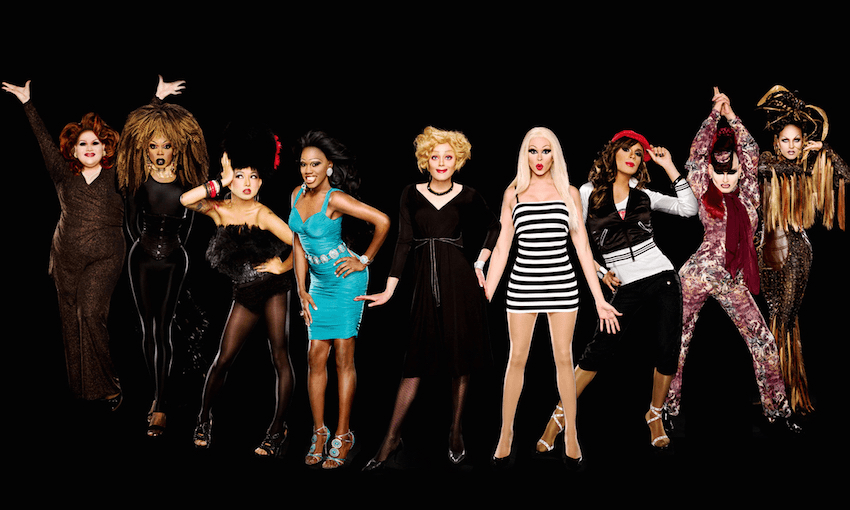 They’re the lost seasons of RuPaul’s Drag Race, but now they’re back for New Zealand’s viewing pleasure. Sam Brooks rounds up the early-episode moments that continue to live on in infamy.

Season One, Episode One: Porkchop

There are many reasons that Drag Race is remarkable, and one of them is that the first queen who ever went home is both a punchline and one of the most memorable queens of her season. So much so that Victoria ‘Porkchop’ Parker shows up to each of the live finales, and is greeted from the stage with RuPaul saying, “Hey Porkchop!”

The most memorable queen from season one – probably more memorable than even the eventual winner, BeBe – is Tammie Brown. The Tammie Brown of ‘teleport us to Mars!’. It’s crazy to me, in retrospect, that Tammie only appeared in four episodes in total (season one, and the absolutely torturous All Stars) when she’s responsible for such moments such as this one, where she flat-out refused to lip-sync Michelle Williams’ surprisingly decent pop song ‘We Break The Dawn’.

Teleport you to Mars, Tammie Brown.

The early seasons of Drag Race were janky, but every now and then they managed to let the heart come through. By far the most importance instance of this, one which reverberates through the season, is Ongina declaring her HIV+ status.

This is a huge moment in television. When you consider the stigma around HIV, even now, and you think of Ongina’s simultaneous bravery and vulnerability in declaring her status on live television, it’s genuinely breathtaking. The series has been responsible for moments like these throughout the years, some more clearly produced than others, but this first one felt like a genuine surprise. It was a watershed moment for the show, the genre, and television in general.

“Uh, I don’t think you’re seeing that Tyra is a complete bitch.”

“You really shouldn’t play the victim, it doesn’t suit you. You don’t do it well.”

These early seasons of Drag Race were fairly light on producer-driven aggression and manipulation, so it was revelatory when Tatianna frankly revealed that Tyra had issues that might not be seen on camera. We live in a post-aware world where every queen on this show knows that the best way to get your narrative across is to be on camera as much as possible, but in 2010 anything went.

Hearing somebody being called a bitch on reality TV meant something back then. Now it’s as commonplace as your standard wine-throw.

This isn’t for real, sadly. It’s part of the music-video-slash-product-placement that RuPaul does at the end of every season to promote her new music, which is a charitable way of describing the sounds that come out of the World of Wonder studio.

It’s memorable less for Tyra, the eventual controversial winner of season two, and more for the perfectly timed slap. You’ve never seen a better slap than this one – delivered with the force of a truck hitting a small child and the speed of a Sunday morning hangover.

The first genuine lip-sync assassin of the show (that is, a queen who manages to survive more than two lip-syncs, and hangs on for dear life), Jujubee also appeals by being one of the first breakout queens of the entire show. Back before being memeable and gifable was a skill you could put on your CV, Jujubee’s interview asides were the absolute best.

… which brings us to the one amazing lip-sync of the early seasons, although season three would bring us a lot more (and people will argue for the ‘Two of Hearts’ lip-sync earlier in this season, but we only have so many words, people).

We’re not here to talk about Sahara Davenport, though. This is Jujubee at her very best, and a Drag Race lip-sync at its very best too. A good lip-sync lets the queens do their thing as performers, showcasing a side of them that the challenges might not have revealed.

Up until this point, for example, the audience might not have thought of Jujubee as being a messy queen or a rock queen; her looks were on-point, and her humour suggested she was a lot more of a comedy queen. But this cemented her as someone who could get down into that 40-ounce-bottle-of-cheap-bourbon that is the song Black Velvet.

It’s a bravura performance and one that should be remembered more often than it is.

It wouldn’t be Drag Race without a controversial winner, and Tyra gave us our first one.

Did she deserve to win? Statistically, sure. She’d never been in the bottom two and she had consistently performed in challenges. If you’re looking at scorecards alone, give her the win.

But a lot of fans thought, and continue to hold onto this view like they hold onto their zimmer frames (season two was a long time ago, you guys), that Raven should’ve won. And judging by her post-Drag Race career, they might not be wrong. Raven’s been on All Stars, and controversially lost there as well.

And it’s classic moments like these that make up the very DNA of Drag Race. They’ve been there since the start, and both production values and production talent have increased since then, but if you want to see where the magic started, look no further than these early seasons.

You can watch all of season one and two (plus Untucked) of RuPaul’s Drag Race on TVNZ on Demand right here.