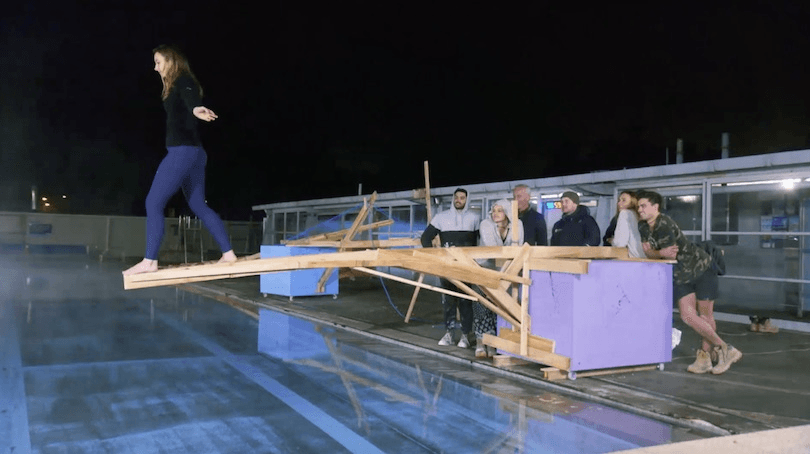 Week seven, and we’re all walking the plank here.

Week seven, and we’re all walking the plank here.

Hobsonville Point had it all this week: scandal, drama, and a thousand painted teardrops on the window of Agni’s soul.

The Block NZ was shaken to its very foundations as we witnessed the Wolf go on a rampage, relived the annual ‘Build a Plank’ challenge, and a thousand My Little Ponies were sacrificed in a ruthless game of strategy.

RIP Twinkle Starlight, your candle blew out long before your legend ever will.

It’s Master Bedroom/Ensuite/Wardrobe Week, and our teams are cantering through the competition like a flock of tiny winged horses on their way to Equestria. While Amy and Stu were rolling in cash after their Outdoor Patio win, the other teams spent the week crying into their McCafe single use coffee cups. Ben and Tom were behind schedule yet again, while the relationship between Agni and Claire and Stu and Amy was as unsteady as a badly built plank over a swimming pool.

In other news: Mark has sand.

There’s one thing standing in the way of the teams winning this week’s huge $12,000 prize: the unbeatable Stu and Amy. Claire and Agni tried to improve their chances by forcing Amy and Stu to use some My Little Pony fabric in their master bedroom, which is either an astonishing move of strategic genius or a fatal underestimation of the magical powers of Rainbow Dash and Rarity. Ignore them at your peril, humans.

They planked, they soaped, they argued over fabric. It was another cracker week of The Block NZ, so let’s find out who came out on top, who faced the wrath of The Wolf, and who wishes they’d never heard the words “walk-in wardrobe”. Mark Richardson might have sand, but we have power rankings. Let’s dive on in.

Chlo and Em dressed up as fruit, tried to design a soap that “screams sex”, and showed the world that planking is still a thing. It was barely enough, and yet, it was everything we’ll ever need. Never change, Chlo and Em. Never change.

Another week, another room reveal win for Amy and Stu. They pulled off the victory by “pushing out the furniture,” aka the most ingenious design feature I’ve ever heard of. May they continue to push their rooms to the literal boundaries, and may a thousand cartoon horses guide them safely to Carpet Court.

The judges gave their outdoor patio a harsh score and they made an enemy of Stu and Amy, but Claire and Agni’s luck turned when they won a cool $7250 in the soap challenge. $7250, for two pieces of hand made soap! Wash me away, flush me down Chlo and Em’s broken pipe, cover me in a shroud of cartoon horses, for I have seen the light and it looks a lot like a “romantic dessert soap for intimate times”.

There’s no point having the longest plank in Hobsonville Point if you don’t have a walk-in wardrobe to keep it in. I’m worried about Ben and Tom’s journey on The Block, and no amount of floral handmade soap will wash these worries away. Will this “no storage zone” be Ben and Tom’s final undoing? Will they ever get to enjoy their $33,900 spa pool package? Most importantly, why has Ben stopped wearing that lovely woollen jersey?

The Wolf unleashed a torrent of frustration this week, as he prowled around the worksite shouting “Push! Push! Push!” and giving Agni a right old rark up. If Agni was a Suzuki, the Wolf would have clamped him and left him sitting on the footpath until auction day.

“I may as well be at home with a 10-year-old,” the Wolf said, as he unleashed his pointy finger and let rip over Agni’s piss-poor painting efforts. It’s a shame Agni didn’t show Wolfie his drawing of House 1’s outdoor space, because he’d used three different colour pens and made some cool squiggly lines and I really think it would have cheered The Wolf right up.