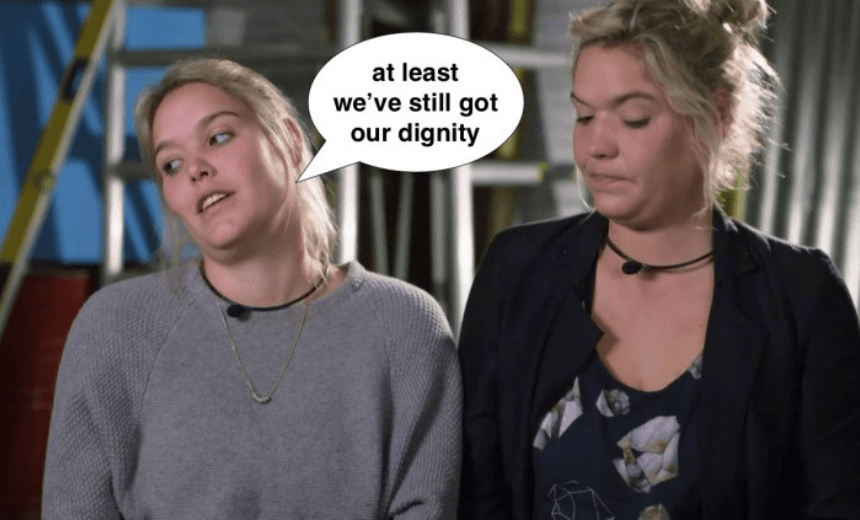 Jane Yee on The Block: A week full of secrets and lies

It was Master Bedroom week, but also Masterstroke week as Ling and Zing set out to cut the twins down to size like a length of two-by-four. Aggrieved by Julia and Ali’s spoilt, bratty, thieving ways, the Blockheads put sharpie to cardboard to expose the twins’ rule-breaking, and with a bit of luck snag some of their cash in the process.

The mighty Judge Richardson confronted Julia and Ali who denied everything because they forgot they were on a telly show with cameras and microphones capturing their every wine-infused move.

In amongst the drama the twins smashed the tiling and dart challenges, which only made everyone hate them more. All in all it was a cracker of a week.

Speaking of cracks, they’re beginning to show in House One with Ling and Zing having a completely rubbish week.

Ling got the spews, Zing got moustache-shamed by The Wolf and then the pair found themselves at the wrong end of the scoreboard for the second week running.

Fair to say, then, it’s a bold call to put these two jokers at the top of the rankings but hear me out. Last week Sam Cable, winner of The Block 2016, joined us on The Realpod and divulged a thousand Block secrets. It was his esteemed opinion that it really doesn’t matter how you fancy up your house with wallpaper, brass whatsits and Haier appliance upgrades, at the end of the day the best house will get the best price and I think Ling and Zing have the best house.

The brothers also led the charge on Operation Twin Takedown, and we should all be truly grateful because without that bit of excitement it would’ve been just another week of the Wolf barking at everyone about leaving shit in the driveway. So who cares that a human can’t fit into their walk-in-wardrobe? What does it matter that there are ungrouted tiles in their bathroom? What’s so bad about a door that opens onto a bed anyway? For the first time in five weeks, thanks to Ling and Zing, we got to enjoy a bit of drama on The Block – so crack open the keg and hoist the funnel, let’s celebrate our new national heroes!

Andy and Nate coasted through this week with nay a stress to speak of. Their participation in Twin Takedown damaged their much-hyped but not remotely real alliance with the Twins, so they took their good deeds elsewhere and found themselves drilling holes for Stace and Yanita and cleaning the Ings’ windows.

Seriously, these guys are making The Block look like a chilled out walk in a North Shore park.

Possibly inspired by Tiff-With-The-Good-Taste from last season, Andy took a trip to the Vitirine to get his hands on a sweaty old gym mat, made from the hides of a thousand French gymnasts circa 1562.

It was all worth it because Andy and Nate took out the win, despite Stace and Yanita’s attempts at ousting them with the minus two. If these guys were in House One they’d have this competition all sewn up, but alas they’re bunkered up in House Two and therefore also at number two in this week’s rankings.

Master Bedroom week was Stace and Yanita’s to lose because a layout decision they made in Week One meant they had a massive eff-off space to work with. Sadly, due to not being architects, they accidentally made their ensuite a trillion times bigger than necessary, compromising the size of the bedroom.

Sadly the only thing the Besties won this week was an insurance policy stopping the other teams from blocking their minus-two which turned out to be useless to them come room reveal anyway.

The Wolf took exception to the Besties’ tiler cutting shapes indoors so he imposed a ten minute tools down penalty, because it makes absolute sense for Stace and Yanita to be punished for breaking site rules while the Twins escape any consequence for committing perjury.

Stace and Yanita are trying really bloody hard. They keep forcing smiles for camera as if their souls aren’t being continually crushed from hovering around the middle of the leaderboard with a house that’s not quite as good as Ling and Zing’s and a floor plan they keep screwing up.

After their performance this week I feel like maybe the Twins will just sit at the bottom of these rankings until the season is out. Not since Alisa and Cohen have I come across such unlikeable personalities on The Block and I bloody love it. After being exposed, the disgraced twins stuffed their empties into duffel bags and scurried off site to dump them with their damning exchanges all caught on mic. Give me this shit over a leaky loo any day.

They broke the rules, lied, said their Blockmates were full of shit and just generally went around being sour, prickly and apparently deluded.

Also they made a bedroom for Bella and Edward, which is a lovely thought but extremely 2008

Stace and Yanita’s builder Sam is loving his time on camera. When the Besties decided to play dress up with their tradies River was like “yeah I’m not gonna wear that” but Sam was all “GIVE IT TO ME RIGHT NOW”

Last year’s winners Sam and Emmett were wheeled out to give the Twins some advice as they too lived through some controversy during their time on The Block. The Twins responded in their usual affable manner making this a thoroughly worthwhile exercise.

When Ali arrived with armfuls of Pita Pit to bribe her tradies into maneuvering a mattress this fella grabbed the opportunity to get the sponsor’s attention, presumably in a desperate bid to break free from the shackles of House Three via a new career path as a brand ambassador for The ‘Pit.

Huge scoop! Besmirched Bach Jordan Mauger appears to have given up the film business in favour of good old carpentry. Twice!