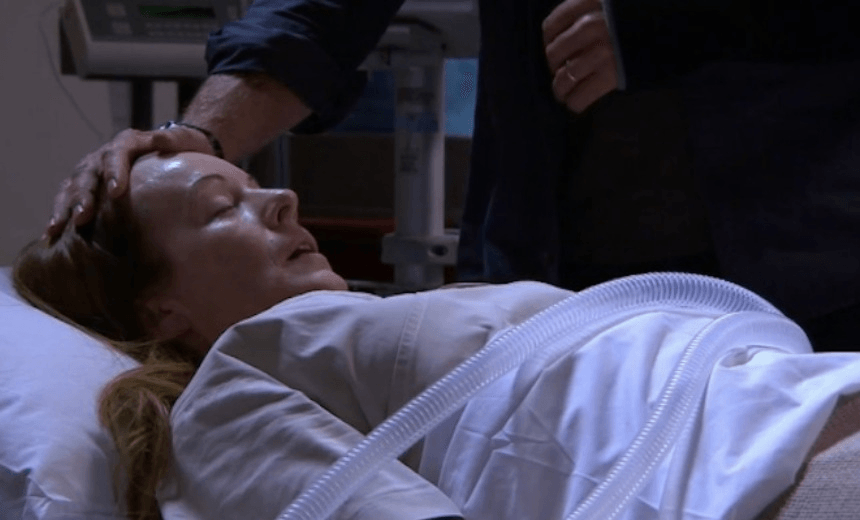 1. Wendy rages against the machine

This week’s Shortland Street experience was like riding the Main Trunk Line down the Raurimu Spiral. It was a steep, twisting descent into a dark valley of grief and despair as Wendy Cooper – nurse, wife, mother and the fiercest ginger ninja Ferndale has known – carked it. Wendy copped the bullet that passed through Murray’s shoulder – those two totes shared everything – and a sudden brain hemorrhage left her on life support. “Can’t you just drill some holes in her head?” Dayna suggested. Indeed, where’s a Mikita Cordless when you need one?

Goodbye, Wendy. May your Chickpea Curry recipe survive longer than you did.

It takes years of specialist police training to master the ‘AOS Thumbs Up’. The coast is clear, Rachel; this guy just dropped Gareth Hutchins like a sack of spuds.

Harper must be exhausted. On Monday she was a blushing bride-to-be. On Tuesday, she decided she was in love with Drew. On Wednesday she ditched Dr Dull for the shiny scalped McCaskill, and by Thursday she was leading the police investigation into Drew’s attempted murder. “Have you checked the rubbish bins?” she shrieked at Detective Foster. Of course he hasn’t, the man is obviously a moron. Nobody is safe from Superintendent Harper, especially an overflowing wheelie bin.

4. Ali ties himself in knots

Hey, men: never kneel down near a single woman. She’ll automatically assume her dream has come true and you’re proposing to her, because OMG!!!! What else does a modern girl want?

The arrival of Ali’s girlfriend Sabina caused confusion aplenty. Was Ali living with Curtis and Jack but sleeping with Lucy and Dayna? Or was he living with Lucy and Dayna and sleeping with Curtis and Jack? So many loose morals and young people in one room that I could barely keep up. Luckily for Ali, Sabina is also a debauched mixed-flatting harlot. It’s a match made in paradise.

Dr McShiny was high on morphine this week, and frankly his performance was never better. He lay peacefully in a drug-addled slumber while the women of Ferndale stood over his bed and argued about who loved him/who tried to kill him/whose turn it was to disinfect his bed sores. Time for Drew’s sponge bath; ladies, form an orderly queue.

6. TK returns to 2016 and discovers a world of confusion and chaos

Look who’s back! TK’s been away for about thirty years – how much annual leave does one man have? He finally returned from his trip Up North (Orewa? Devonport?), ready to swoop in and save his beloved Kylie from the scary man with the gun. Too late, TK. The poor lamb was so confused when he learned Kylie was taken hostage and managed to escape without his help.

Cheer up, TK. I’m sure one day there’ll be a jar of pasta sauce at home with a too-tight lid that Kylie will need a hand with.

7. Jimmy has a hole lot of work to do

Jimmy and Jack return to the café to ‘tidy up’, and Jimmy suggests they start by mopping the floors. Nice idea, Jimmy, but maybe you could turn your attention to the bullet holes in the walls?\

8. Virginia: nothing to see here, people

I bloody love Gin, and not just the drink. I don’t know what kind of predicament she’s got herself into, but I reckon you don’t wear a frock like this to stain it with your ex-husband’s blood. Scissors, pills, blood…CALM DOWN EVERYONE THERE’S A LOGICAL EXPLANATION FOR THIS.

With Evan and Jasmine back for Wendy’s funeral, this week promises to be another tearjerker. Will Drew sit up for some jelly and ice-cream? Will Harper finish checking the rubbish bins? And will the AOS Guy give us a rousing set of jazz hands? We can only live in hope.