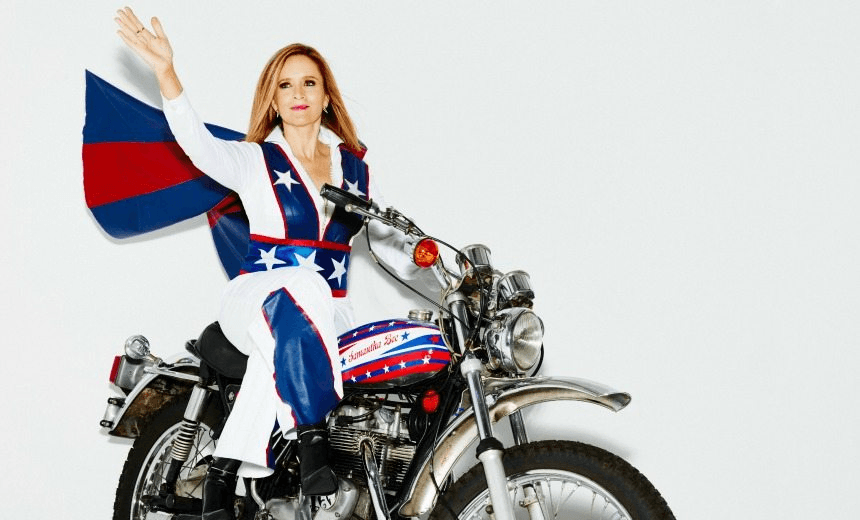 Dominic Corry sits down in LA with late night host Samantha Bee and producer Jo Miller from Full Frontal With Samantha Bee to talk Trump, The Shire and why New Zealand kicks ass.

Since launching less than a year ago, Full Frontal with Samantha Bee has carved itself out a prominent place among an especially crowded field of American late-night political comedy shows.  These shows are being looked to more and more to make sense of the increasingly unpredictable quagmire that is American politics, and Bee, formerly of The Daily Show, is particularly adept at doing so.

A relentlessly physical comedian, Bee presents all the show’s rat-a-tat political patter while standing up, which helps set her apart from her peers and allows her very relatable exasperation to come through every part of her body.

Bee isn’t the first female late night show host (that was Joan Rivers), or the only one (see: Chelsea Handler’s show. Or rather, don’t), but Full Frontal with Samantha Bee is proving itself a viral lightening rod for a multitude of modern concerns.

I recently got a chance to speak with both Bee and Full Frontal‘s Executive Producer/showrunner Jo Miller, a fellow long-term veteran of The Daily Show, in Los Angeles.

Dominic Corry: Given that it’s your job to comment when seemingly cataclysmic events occur in the political realm – such as the recent election – do the people in your life look to you for an explanation?

So what do you say?

SB: “Distill something for me so I can…

Do you feel added pressure since the election to play that role for your audience?

SB: I think I feel the pressure from within our organisation to do a good job. We create a show for ourselves first and foremost. I think that’s what the key is, actually, is that we’re building a show that pleases us first. If you felt that responsibility all the time it would bear down on you in a way that renders you incapable of doing a proper show.

JM: And there’s the responsibility to our people. What we said the night after [the election] about the people of colour on our staff being scared is absolutely true. They are.

One of the interesting ways in which your show sets itself apart is how you stand-up for the entire show, which allows you to communicate with your entire body, including various arm and leg gesticulations. This is something everyone does when communicating, but you don’t see it much  on the news commentary shows. Was something you intentionally wanted to tap into?

SB: I rarely think about it. I think if I thought about it, it’s like when someone tells you’re smoking a cigarette incorrectly, you can’t do it anymore. You can’t manage to do it in the way that human being does. It’s just a natural thing. It’s not mapped out in any way. It’s just the best way to deliver the material.

It’s funny, we were up on stage here [at TCA, a US TV press event] literally last year telling people we were not having a desk. But the moment that we did our first show it was apparent that we could never have had a desk because it doesn’t help the material to be confined behind this obelisk. Why would we put ourselves behind a wall?

JM [to SB]: It also means you can do all the prop work. You’ve tied a noose, you’ve packed your bag, you’ve pulled out a megaphone, you’ve vomited on the screen.

What do you think of the theory that the ironic political comedy boom – which The Daily Show was at the centre of – was driven by the United States’ burgeoning awareness of how the rest of the world perceives it?

JM: I think a lot of Americans have always been aware of how people see us.

SB: And I still think there’s a vast majority of people who remain unaware of how the world sees us. And don’t care, at all. I think there’s an awful lot of people who go to London for the first time and see ten minutes of CNN International and think “Why are they talking about us?”.

What’s the first thing that comes into your head when you hear the words ‘New Zealand’.

SB: Top of the Lake.

SB: I loved Top of the Lake so much. Is that bad, from a New Zealander’s perspective?  I want to go there so badly, I wanna visit The Shire so badly. I know that’s probably the answer that you didn’t wanna hear.

JM: Actually, my first answer is: [you] stood up to America on nukes. That kicked ass man, that was so cool. Also, wow are your parliamentary debates boring. I’m used to Question Time, and I watch yours, and I’m… trying…. to… stay… awake. They’re so polite.

SB: I’m from Canada originally, and everyone says that Canada and New Zealand are similar, so I think I’d fit in really well there.

JM: We need to find an excuse to do a story there. Can you feed us stories that we can cover and get TBS to pay for us to go?

I’ll put a link to your Facebook page in the interview. The readership of the website this will be published in is a particularly forward-thinking bunch, and will no doubt have plenty of suggestions.

JM: We’re ready to blow the lid off New Zealand.

Do you think about the international audience of your show much?

SB: All the time. I’d like to think there’s world in which we could be emissaries of a point of view that would suggest there are normal people here still. Okay. We’re trying. We’re doing our best.

JM: We’ve had the experience over and over of having to apologise to our country while we’re abroad. It started with the first Gulf War when I was doing my post-graduate work in England, I felt personally responsible for a president I didn’t vote for. So we have a habit of going abroad and apologising a lot.

Just to finish off, I have to ask, did any part of you, even the tiniest amount, get excited for the potential comedy when the election results became apparent?

JM: No. Not a single stitch.