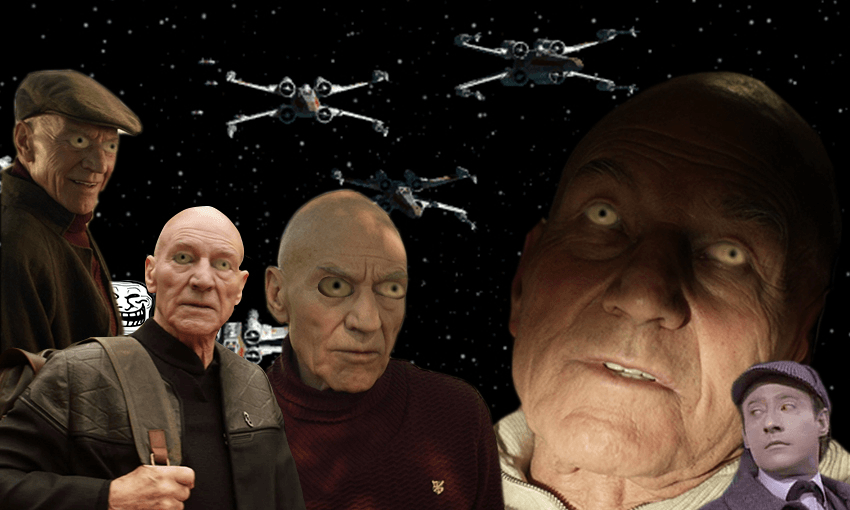 The Frenchest man to helm a starship is back! The first episode of Star Trek: Picard is out, and José Barbosa and Josie Adams have some thoughts.

Warning: contains spoilers (kind of a big one)

Captain Jean-Luc Picard was a father figure to me for a couple of years, so seeing him back on screens is how I imagine dogs feel when their owners come home from war. I felt exactly like this and I will not take it back. Picard is my dad and I have been barking at the door for 17 years.

If dogs could write fan fiction about their owners coming home from war, what they’d write would also be pretty similar to Picard. It opens with an Enterprise-esque ship soaring through the colourful cosmos, with Bing Crosby’s ‘Blue Skies’ playing as Picard and old mate Data play a game of space cards.

My dad and my boyfriend are accompanied by a massive jug of Earl Grey, hot, by the gallon. It’s too good to be true. Watching, I turn to José and tell him I reckon this is a dream. Yeah, I’m a pretty experienced cultural commentator.

Episode one remains fanfic-esque until about two-thirds of the way through. Dahj is the Mary Sue insert, an emotionally fragile fleshbot just looking for safety while wearing a cool coat. It’s basically the dreams I used to have about being in Bladerunner. Then she dies!! But did she?? Kind of! This scene made me racist, because after it I immediately viewed Picard’s Romulan staff with a suspicious eye.

Sir Patrick Stewart is doing the heavy lifting in this episode, which is super unfair because he deserves a better cast after pulling his acting muscles playing Professor X for so many years. Thank God Allison Pill, nerd actress extraordinaire, shows up. I gather that in the next episode the crew will assemble and we’ll also get a gruff young gun pilot and some muscle/black ops expert.

Traditionally, Trek opening titles tell us something about the show: whether it’s explicitly “going where no-one has gone before” or just showing us the Deep Space 9 space station whirling around a wormhole. The opening titles to Picard are vaguely biological: microorganisms unfurling, pixels replicating, your standard close-up Orphan Black stuff. Is this about AI? GE?

The answer appears to be both, but we don’t yet know if Picard is a Westworld robot. What we do know is that this episode establishes J.J. Abram’s 2009 insult to the Federation as canon: the Romulan supernova really happened. Fuck that noise. I’m sticking around to see Seven of Nine show up and then I’m out.

For the longest time I’ve had one all-embracing unified theory of entertainment media: everything is shit now. Generally speaking, every reboot or prequel or spinoff or ‘reimagining’ of a successful IP is basically terrible. It either completely forgets what made the original special or photocopies ideas and jokes or visual motifs and upscales them to 1080p.

Into this climate came the news Sir Patrick Stewart would be reprising the role of everyone’s favourite RSC French man, Jean-Luc Picard, in a new series focussing on the former captain of the Enterprise D. “This will be shit,” I thought, remembering how everything is shit.

And then the Watchmen series came along and Lindelof and crew knocked it out of the park, taking the best of the lauded comic book and making it fresh and funny and intense and, most of all, taking all that and using it to examine something really important.

“Oh wow,” I thought, my world rocked to its core, “maybe not everything is shit.”

I began to hope that maybe Picard would not be shit.

OK, actually the first episode of Picard is shit. And by shit I mean it’s fiiinnneee, but really, it’s shit. The dialogue falls from the sky like aviation waste: “I knew what to do. It was like lightning seeking the ground.”

Characters make out-of-the-blue decisions that make no sense. For example, Dahj (a young woman mysteriously linked to Picard) tracks down Picard because she feels somehow she’ll be safe, but then nicks off in the middle of the night because she was worried for the safety of her hosts.

The one genuine surprise comes about two thirds of the way through the episode where Dahj, until then placed as a crucial character to the story’s plot, explodes; murdered by some bad guys with StarLord’s guns. It’s completely undone two scenes later where it’s explained that synthetic robot people are always made in pairs. Why? They just are, whatever … it doesn’t matter because it means there’s another one of her out there and we can use the same actor. It’s a win-win, take an early lunch, people.

Amusingly, the next biggest surprise that actually made Josie and I gasp was the appearance of Discovery-era Spock! Well, we thought it was Spock, turns out it was some Romulan guy who looked a hell of a lot like Spock.

Picard is really just fine. The series does look great, possibly the lushest dynamic range in which Star Trek has ever been shot since the original series and some of TNG (oosh give me more film masters plz). It’s a treat to see Sir Stew get his teeth into something and not phone it in (hello, all of the X-Men films) and I’ll never get tired of seeing science fiction people use keyboards to pilot machine or vehicles like they’re typing in commands while playing Zork.

But if the story of the series (or season) is to revolve around AI, do I have any faith it’ll be explored with the same detail, intensity and skill as on the better Data episodes of TNG (season two’s ‘The Measure of a Man’ being the high point)? So far I have very little faith, but I hope I’m proved wrong because Picard deserves a stonking great last adventure.