If you don’t have six hours a week to devote to deplorable people yelling at each other across a dinner table, The Real Pod is here to help.

This season of Married at First Sight Australia promised things would be different. The soothing voiceover assured us that in these troubling Covid times, the search for love and connection has never been more important. “A courageous group of singles are ready to trust their hearts to science in the quest to find their soulmate,” the omniscient voice crooned. “Matched and carefully guided by our three experts – this year the experiment will be reinvented.”

But, just as a tiger can’t change its stripes, MAFS contestants can’t keep their wine in their glass no matter how much fake science they pack into the “experiment”. Over at The Real Pod, we have been podcasting every moment of the dinner party chaos, the scientifically-sanctioned makeout sessions and the bizarre commitment ceremony revelations. With MAFS AU clocking in at 90 minute episodes, four times a week, allow us to soak up all the horror for you:

Subscribe to The Real Pod on Apple Podcasts, Spotify or your favourite podcast provider.

And if you’re still not up to date, here are 10 of the most bonkers things that have happened in the season so far. In the words of bride Booka, welcome to hell, bitches:

10) Rusty and everything about Rusty

Russell is a bloke that contained many multitudes during his short stint on MAFS Australia. He was a kombi fan, a massage chair owner, a salmon-denier and a schnitzel truther. He had his walls down, he had his eyelids firmly open, and he certainly didn’t know how to deal with new wife Beth when she burst into tears at the mere sight of him. “Yeah… not too sure how to fix the old leaky tap with the eyes problem,” he confessed. Me neither Rusty, me neither. / Alex Casey

Car salesman James and barber Jo enjoyed a promising start to their MAFS journey, but it wasn’t long before they hit the skids and cracks began to show in their wedded windscreen. Not even Novus could repair the damage done by James’ insidious gaslighting, and during Sunday’s commitment ceremony the couple hurtled right off the hot love highway and straight towards the scrapheap. In a misguided attempt at getting some lols, James announced to the room he was in love with another woman before leaving his wife on the sofa to give sexpert Alessandra a truly unwanted peck on the cheek. If James was a car he’d be the 1988 Ford Laser I drove in my early 20s: unreliable, unsafe and a bit grotty on the inside. / Jane Yee I fell for Coco the second she ashed her imaginary cigarette and said “that’s showbiz, baby” during the episode one hen’s night. What her husband called her “corny one-liners” fast became a cornerstone of the show (and a lot of marital tension). When Sam revealed his heart-wrenching struggle to interact with women who don’t have big boobs, Coco dropped the line of the series so far – “does the fact I’ve got a body like a hot dog matter?” That hot dog bod would soon shine in the outfit of the season, when she donned a “skin tight see through, cheeks popping, titties dropping, head to toe rhinestone body suit.” Even though she was very much embroiled in a cheating scandal, the Coco brand was so strong that, at the end of the day, we all came away wanting the best for our dazzling, corny, cringey hot dog. / AC

It was the perfect argument for the Covid age. After negging him for their whole wedding and honeymoon, marketing manager Jamie unleashed out of nowhere on gentle giant Chris for supposedly not washing his hands in the loo. “LET ME SMELL THEM” she barked, before declaring “THERE’S FUCKIN’ SOAP FOR A REASON YOU DIRTY GROT!” Dirty grot. Dirty. Grot. GROT! An incredible, horrifying turn of phrase that could have only come from across the ditch. We’ve simply g(r)ot to get this bubble going ASAP so I can thank her. / AC

A crucial part of the MAFS reinvention has been inviting the already-married couples to the new batch of weddings that inevitably happen when a handful of couples fall apart and leave the show in the first week. It was a recipe for disaster when Jo openly heckled newlyweds (and literal angels) Jonny and Kerry during their wedding last week. “You look good… from the outside,” she slurred. “You’ll be happy for five days and then the rollercoaster will begin.” / AC 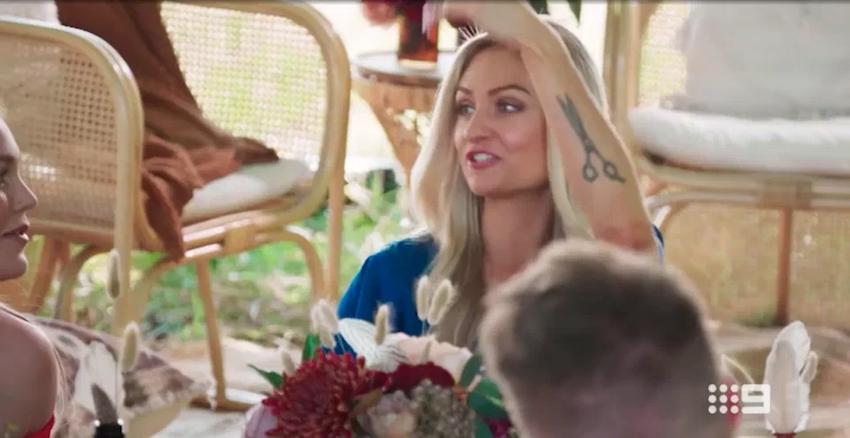 If there’s one thing romance reality TV producers love, aside from completely fucking up the participant’s lives, it’s making total strangers share a bath. Seeing Patrick drizzling an entire bottle of bubble solution under the tap and then adding 3947 bath gels for good measure, you’d be forgiven for thinking he may have never run a tub for two before. This was further cemented when he drew Belinda’s feet within an inch of his nose to describe her toes in detail (pink! soft!) before inexplicably clapping her feet together like a Silver Ferns fan wielding a couple of bang bang sticks at the grand final. /JY 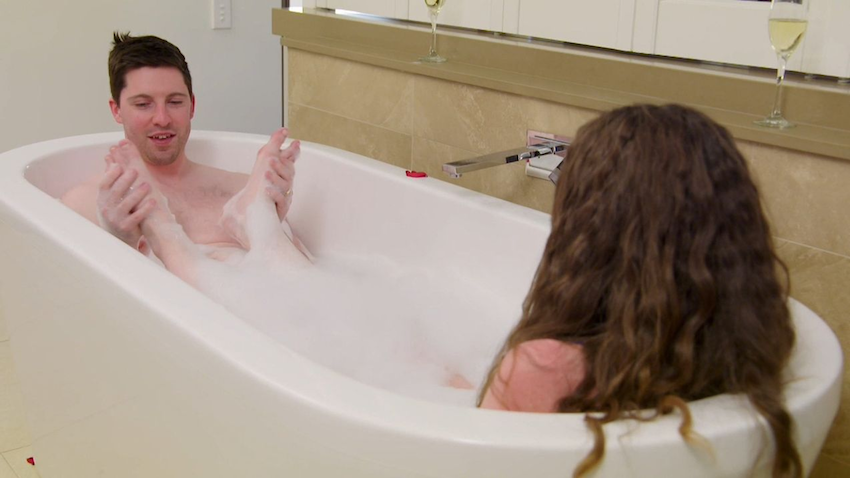 If you’re happy and you know it…

Nothing says “I love you” like ranking your spouse’s friends in order of attractiveness, and then arbitrarily bunging your significant other somewhere in the line up. In a shocking turn of events, the “hot or not hot” challenge did very little to bring our couples closer together. Sam (yuck Sam, not nice Sam) got particularly wound up after Coco placed him somewhere near the bottom of her rankings in response to him spending approximately all of their marriage saying he didn’t find her attractive. His placing on Coco’s hot-o-meter didn’t bother him so much as the fact she ranked him lower than Russell. Sam needs to take a good hard look at his attitude if he thinks he’s got anything over Rusty, a man who knows a thing or two about good hard looks himself.  /JY 3) Sam and everything about Sam

Sam is a man who knows what he wants, and what he wants is boobs and bums. Big ones on both counts, or this marriage is over! Anyone with eyes could see Sam had hit the jackpot when Coco sashayed down the aisle firing jaunty one-liners in a blitzkrieg of banter. Unfortunately, it turns out Sam is a total numpty who doesn’t know a delicious hotdog when he sees one. His aversion to pilates perfection left the door open for Cam to slip through and get a bowlful of the snap and crackle that is our girl Coco Pops. /JY I thought you wanted big buns?

2) Bryce and everything about Bryce

Honesty, kindness, loyalty and emotional availability are just some of the qualities our participants were looking for in a stranger-spouse when they entered the experiment. For regional radio host Bryce, however, it’s not what’s on the inside that counts – unless you’re talking about the inside of your eye sockets, in which case the inside counts very much indeed. The experts proved their ineptitude when they matched Bryce with Melissa, a gentle soul with lovely green eyes, when he specifically ordered a blue-eyed bride. Reason for (inevitable) divorce? Irreconcilable eye colour. /JY What happens when an insufferable fashion designer meets a deplorable regional radio host? The most explosive, toxic and embarrassing fight so far. It began with Sam doing angry DJ-ing on the arm of the couch, before yelling “BRYCE” across the room, and it ended hours later with poor Pat drenched after Bryce tried to start a water fight. Names were called from “doormat” to “Gonzo”, and we were all transported back to primary school thanks to two puffed-up grown adult men in really ripped jeans and really sockless loafers. Welcome to hell, indeed. / AC

Subscribe to The Real Pod on Apple Podcasts, Spotify or your favourite podcast provider and let us do the heavy reality TV lifting for you.