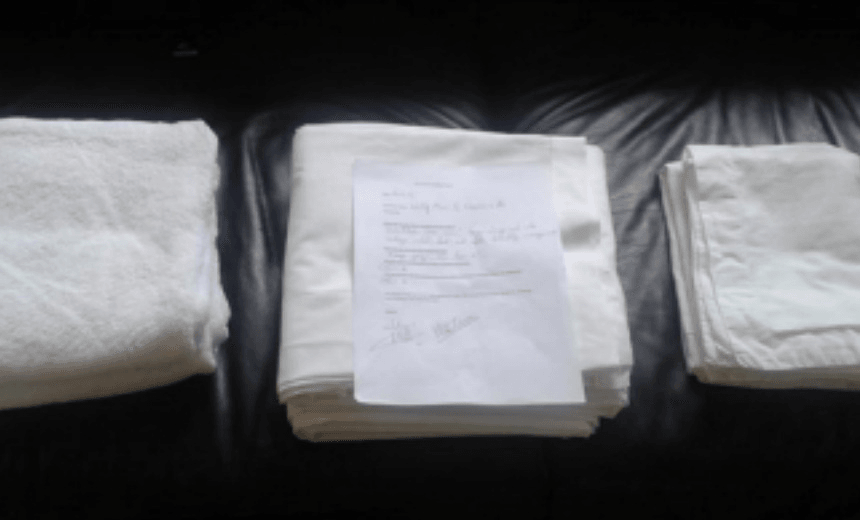 Not only were WIlly Moon and Natalia Kills electric TV talent, they also were involved in one of the strangest TradeMe auctions of the year. Alex Casey tracked down the man who tried to sell their used sheets, towels and hotel feedback form on TradeMe.

Notwithstanding the furore enveloping ex-con Slim Shaedy, there was far more more disturbing news out of The X Factor NZ universe this week. A few days ago there were murmurings on Twitter that someone was trying to pawn off some pretty unappealing X Factor NZ merch. A piece of Stan’s neck tattoo? No. Mel Blatt’s plastic dummy eyes that mask her long on-camera naps? No. Dom Bowden’s personal spray tan device? I wish.

It was a deeply unsettling Trademe haul of bedsheets, towels and a glowing feedback form used by none other than futuristic lovebirds Willy Moon and Natalia Kills, enjoyed by them during a romantic getaway to the city of 1000 farts.

Here are the artifacts for sale:

Lovely photograph of staff and Kills-Moon

The biggest scandal at this stage is Willy Moon’s outfit. What the hell are those shorts? Are they supposed to be playing volleyball with his wang?!

Lovely collection of sheets and towels

Scariest thing to happen in a hotel since Norman Bates.

Judging by the looping ‘l’s, Natalia wears the pants in the feedback form arena. Love a good “vintage motel look” – little do they know that ‘vintage’ is not really a part of the Rotorua lexicon, and it’s actually just a old-ass place. PS has Moon tried to draw a moon after his last name? All signs point to yes.

Anyway, so Natalia Kills found out about it and threw down some extremely gangster Twitter rage:

The auction was deleted shortly after, but that doesn’t delete the internet. I was able to track down both the auction and the motel manager John, and have a quick chat about his bedsheet bargaining.

He answered the phone frazzled, claiming he had been taking calls all morning. John has accepted full responsibility for the auction, explaining that he had rushed into it after getting “caught up in the hype” of having New Zealand’s most silvery space couple come to stay.

Recently appointed to a managerial position, John had been putting energy into new ways to promote the motel, “I just thought ‘this will sell’. People buy ridiculous things these days, I was just thinking about the marketing.” He wishes to make it clear that he was never intending to sell the sheets soiled, “we wash and circulate all our laundry.” Sadly, after 380 views and eight ‘watchers’, the auction was deleted. “I started to think ‘oh shit, what have I done?’”

Despite the backlash from Kills and a few members of the public claiming that they will “never stay there again”, John remains a little optimistic (“one guy called me a legend”). He has since apologised on radio, and seemed genuinely remorseful about the ill-fated auction, “I wanted to apologise, I was thinking irrationally and I wasn’t focused on my job as management.”

Before I left John to continue managing, I asked if he was a big X Factor fan. Turns out, not only does he watch the show religiously, but had even auditioned in Rotorua with ‘Nice and Slow’ by Usher.

He didn’t get through.