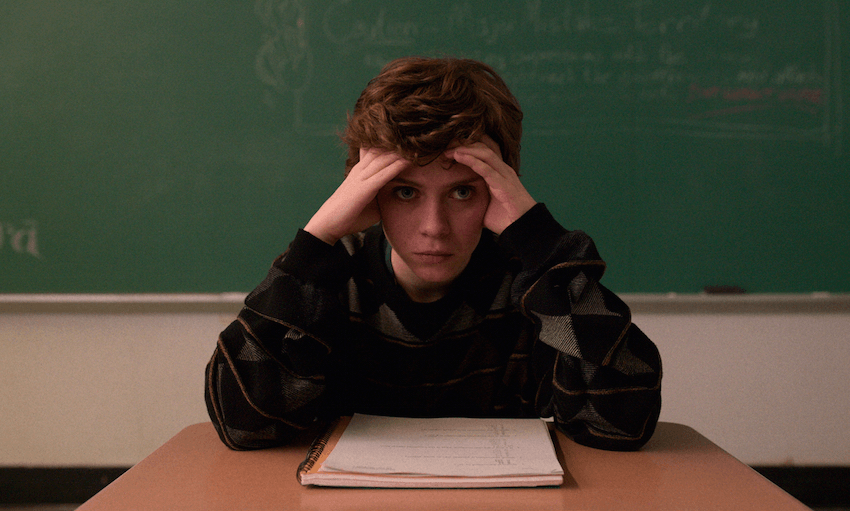 Sophia Lillis stars in I Am Not Okay With This, which feels like other shows you love, except not as good.

Review: I Am Not Okay With This is much less than the sum of its borrowed parts

Sophia Lillis stars in I Am Not Okay With This, which feels like other shows you love, except not as good.

Sam Brooks watches I Am Not Okay With This, the new show that feels like a calculated mash-up of a bunch of other Netflix shows you really liked.

It’s not a new thing to describe a television show in this X-meets-Y fashion. It’s convenient shorthand, and a way to quickly determine whether the viewer will like a show or not. If they liked one of those things, they might like this new show. If they liked both, they’ll definitely like it. Neither? Not for them. Small talk over, great!

It’s not necessarily even a new thing to make a television show in this kind of Frankenstein way. Nearly every reality show is some unholy mash-up of pre-existing shows. What is RuPaul’s Drag Race if not America’s Next Top Model meets Project Runway, topped off with a huge seasoning of queer excellence? And what is Love is Blind if not Married at First Sight crossed with the Stanford Prison Experiment? (Little bit of editorialising on that one, admittedly.)

More than any other streaming service, Netflix relies on this kind of iterative approach, to the point where their shows can seem like entries in the same section of a library. After a half decade of making TV, its original content often feels like rehashes of earlier, successful shows – often even with the same actors (how many times has a Netflix Original featured the warm, approachable visage of one Noah Centineo?). That’s hardly surprising: its entire algorithm is designed to learn what you most like bingeing, and then give you more of the same.

I Am Not Okay With This is the most obvious example of this approach yet. It feels like a show that was developed, commissioned and programmed simply to be similar to other shows on the Netflix platform. It even has the same people behind the screen: the comic book on which it’s based was written by Charles Forsman, the same guy who wrote the End of the Fucking World book; the adaptation is directed by Jonathan Entwistle, who also directed EOTFW; and it’s produced by Shawn Levy and Dan Cohen, who also produced Stranger Things. It’s a Netflix family affair.

The show focuses on Sydney (Sophia Lillis, of It fame), a girl in her teens who suddenly discovers that she unleashes telekinetic blasts of energy when she gets angry (there’s your Stranger Things) and has to deal as well as the general travails of being a surly high school student (there’s your End of the Fucking World), be it her recently deceased father, her sexual confusion, or just not fitting in, because it’s high school. Oh, it’s also set in the ’80s but with a decidedly modern bent, so there’s your Sex Education comparison.

The most winning, and unique, aspect of the show is the relationship that forms between Sydney and her stoner-wannabe neighbour Stan (Wyatt Oyerp, also of It). Even though the dialogue seems almost self-consciously John Hughesian, there’s a believable warmth between the two, even after an early misjudgement of boundaries. It’s always a blessing to see a show engage with the blurred lines of romance, friendship and family that can form when you’re a teenager, but that strength only highlights its other weaknesses. The show is at its best when it departs from the supernatural hook of its premise, and the reference points that probably got you watching it in the first place.

It’s a muddled graphic novel adaptation that feels like either the first half of a TV season or a film needlessly stretched out to seven, very short, episodes – many which barely break the 20 minute mark. The one upside is that it’s a quick watch, barely three hours from start to finish, and the pace has the same feel as flipping through a comic book. But it mostly serves to make the show seem slight. When your most likely comparisons are other shows that sit next to it on the Netflix carousel, or the looming shadow of Carrie – the ur-text for teenage girl trauma manifesting as destructive powers – there needs to be something meaningful for the viewer to hook into.

The near constant voiceover also does a disservice to Sophia Lillis’ excellent performance, clumsily underlining what she makes clear with her face and her permanently slumped physicality. The best episodes, especially one that focuses on lovelorn wannabe hipster Stan, are those that dispense with the voiceover entirely. It’s so intrusive that it feels like a studio note, as though being directly addressed by Sydney will keep us watching rather than drifting off to another show.

While it’s not necessarily a problem that I Am Not Okay With This is so similar to other Netflix shows, it’s worryingly reflective of the way that Netflix treats much of its content. There are the shows you see promoted all over your social media feeds, and pushed hard by the service. And then there is the content that exists in the space between those flagship shows. Everything about I Am Not Okay With This, from its length to where it sits in the schedule, seems to exist simply to fill a gap. It is there for that crucial ten second period when you’ve finished a show it’s similar to, have no more episodes to watch, and can’t be bothered to reach for the remote to pick something for yourself.

But hey, if you’re waiting for the fourth season of Stranger Things, you could do worse.

I Am Not Okay With This is streaming on Netflix now.