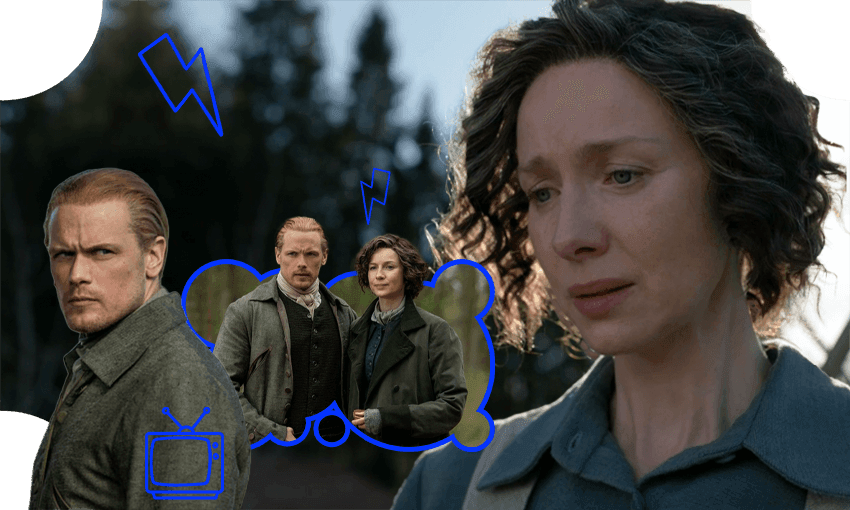 Outlander is back with news of a secret throuple happening right under Jamie Fraser’s nose. Tara Ward recaps episode seven of season six.

Welcome back to the Fraser weatherboard cottage of sin and regret, where this week Malva Christie lay dead in the garden and Claire was arrested for murder. That was dramatic enough, but my mind is stuck like a sin eater’s finger in the mud. I cannot move past Lizzie’s announcement that she was pleasantly engaged in a throuple with both Beardsley brothers, and that their debut performance involved the phrases “slippery with lotion” and “wrinkled like raisins”.

Let’s all lie down in the vegetable patch and let our heads reel from such a detailed, emollient-heavy revelation. Forget about concentrating on the emotional fallout from Malva’s death, or the local vitriol flung at the Frasers, or Claire’s anxiety that perhaps she did kill Malva but was so out of it on ether that she didn’t remember. All I can think about is Lizzie happily hooking up with twins while she was so sick with malaria that her “teeth were clacking so hard together” she thought they would break. Health and safety, you guys.

This season’s penultimate episode was all about Malva’s murder. The news of her shocking death travelled quickly through the Ridge, and if we thought Claire was enemy number one after she asked Tom Christie for a poo sample, then this was next level. One by one, the men of Fraser’s Ridge turned up to tell Jamie how awful the Frasers were, and how wicked Claire was, and how they didn’t approve of what Lord Broch Tuaruch was doing with his hair this season.

Malva’s murder made Claire’s already fragile mental heath even worse. The ghost of Lionel Brown kept popping up in her head, haunting her with accusations and freaking her out with his ghastly 18th century breath. Remember when the weirdest thing in Claire’s surgery was Jamie’s sperm? Miss those guys.

Speaking of sperm, Lizzie had the confused glow of an unwed pregnant woman in love with two identical brothers. It was Ian who revealed to Claire and Jamie that Lizzie was pregnant and that she didn’t know which Beardsley brother was the father. Claire drilled down into the details, with Lizzie confessing that the brothers had initiated some unusual first aid while she was ill with malaria.

Romance never dies on Fraser’s Ridge, it just falls in the mud next to some severed fingers. After Jamie was rebuffed as a pallbearer at Malva’s funeral and Malva’s brother Allan accused Claire of ruining everything, Lizzie asked Roger to marry her to a Beardsley. Roger had no pants on, but Jamie had already handfast Lizzie to one brother, and the hornbag trio didn’t want the other brother to miss out. Lizzie – the woman who last week scolded Claire for swearing – now has two husbands, a baby on the way, and a new found fondness for dried grapes.

Claire, meanwhile, reached breaking point. In a powerful scene where nobody mentioned paps or lotion, she finally admitted to Jamie that she’d been relying on ether to cope with her trauma, and that she couldn’t run from her problems any more. Jamie Fraser did what Jamie Fraser does best, and told her they were in this together. He promised to take his shirt off more often and she promised to tell him what an oven really was, and it looked like the Frasers might get a happy ending for once.

That was until a thousand men with rifles and horses suddenly arrived at Fraser’s Ridge to arrest Claire for Malva’s murder. See you at the season finale, my fruity little sultanas.