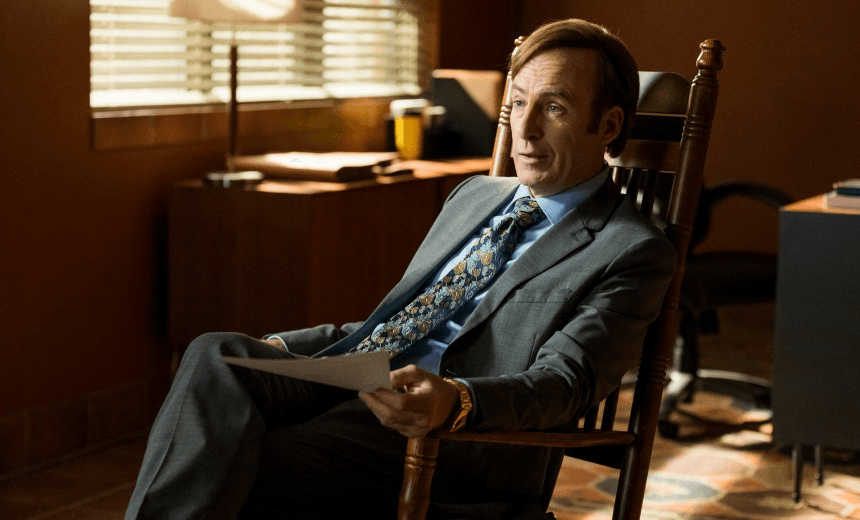 Better Call Saul: an end and a new beginning

With season three of Better Call Saul just finished, Jimmy and Kim have their own terrible futures to confront. Simon Wilson revisits his favourite programme (well, one of them). Contains some very cryptic spoilers.

It’s like Star Wars in the strip malls and suburbs of Albuquerque, right? And Star Wars is like Paradise Lost in space. And Paradise Lost, as true fans of contemporary literature know, was really only a prequel for Breaking Bad. You can see what we’re dealing with here.

The dark side is a whole lot of fun, until it’s not. And now Better Call Saul book three, sorry season three, has ended. Keeping the spoilers cryptic: a villain’s fiery death, another villain felled, a clever upstanding hero broken, the sinful deceit of the protagonist undone by remorse and made good, for the moment, by penance. And, in the end, a great sense that what will now follow is a new beginning.

Better Call Saul, if you’re out of the loop on this, is the prequel to Breaking Bad, Vince Gilligan’s magnificent study of a good man, Walter White, a chemistry teacher dying of cancer, who has a bad idea that seems like a good idea (no health insurance, so he makes meth to provide for his family after he’s gone). So he puts himself in the way of temptation. His skills give him purpose and bring him respect, and before he knows it he’s an addict. Not of the drugs, and never mind the money: Walt’s addicted to his own achievements. He knows, for the first time in his life, self-respect. More commonly referred to, in a biblical context, as pride. It comes before a fall.

Walt also knows self-disgust, because no one suddenly loses their entire moral compass. Respect and disgust, Satan and God, battle away for Walt’s soul, as they always do. But, in storytelling as in life, it was never a fair fight. If God won we wouldn’t have stories at all.

The theme of Breaking Bad is also the theme of Better Call Saul, also created by Gilligan, only the prequel explores it in a comedic minor key. We knew Saul (Bob Odenkirk) as a crooked criminal lawyer in Breaking Bad, but here he’s Jimmy McGill, smart guy, gift of the gab, eye for the main chance. He’s good at conning people but he’s also got a heart of – well, not exactly gold, let’s call it shiny yellow tin.

The principal story arc of Better Call Saul is the fall of McGill, from well-meaning hustler Jimmy to morally compromised drug-syndicate crim Saul. What causes the fall? His own predilection for scams is a part of it. But Jimmy wants to do good. He’s very good at it too, and he takes great succour from it. He looks after his mentally ill genius of a brother Chuck (Michael McKean) as well as he can, and the task is selfless. He brings great pleasure to the lives of his clients, the elderly residents of a rest home. (“They love you, Mr McGill,” says his paralegal assistant, with some surprise.)

What stops him is the world. Petty rules and regulations, small-minded and small-hearted people, confounding him at every turn. But mainly it’s Chuck, who is jealous and fearful and ruthless.

Season three is when Jimmy turns. He beats Chuck but it costs him his moral sanctity. He betrays his clients, and when he makes good on that, succumbs to remorse and allows himself to be humiliated, he declares, almost with a moan, “But I really don’t want to do it.” It’s too hard to be Good Jimmy and you just know that’s the last time Bad Jimmy is going to let Good Jimmy make a fool of him.

And, lurking by his side, there’s Kim (Rhea Seehorn). Jimmy’s partner, the Good Lawyer who has stood by Jimmy even though he keeps humiliating her. Kim’s the key here. We know from season one and two that she has a thing for scams (the two of them entertained each other by conning customers in bars). We discovered in this series how far she was prepared to go to help Jimmy destroy Chuck. It’s Kim, good Kim, stronger than Jimmy and yet hollow at the core, who’s ready for a complete Satanic fall.

Season four? That new beginning, the serious run-up to Breaking Bad. Kim’s going to the dark side, and because we know she’s not in Breaking Bad she’s going to pay a terrible price for that. Jimmy will become Saul because of it. And Jesse Pinkman (Aaron Paul), he’ll show up, because that’s the other tantalising story arc: the assembly of the BB crew. I stress, I am just guessing.

Gus Fring the chicken-man drug boss (Giancarlo Esposito) turned up this season and seduced the enforcer Mike Ehrmantraut (Jonathan Banks) into working for him. And there was Nacho (Michael Mando), the gangster with the fleshy lower lip that nobody can trust. What a trio: each of them with the ability to fill a room with dread while standing completely still. There are the gorgeously cinematic parking lots and other landscapes, every frame a composition of strange alien beauty. The off-kilter music and the lovely little prologues, each of them a gem.

It moves slow, this storytelling, there’s no denying it. You’re asked to sink and then to let yourself drown in its delights. If you’re not convinced about that, try watching episodes 3 and 5: each of them so different from the other and each a complete, deeply rewarding short story on its own. Then go back for the rewards of all the rest.

Click below to catch up on all three seasons of Better Call Saul, available exclusively on Lightbox