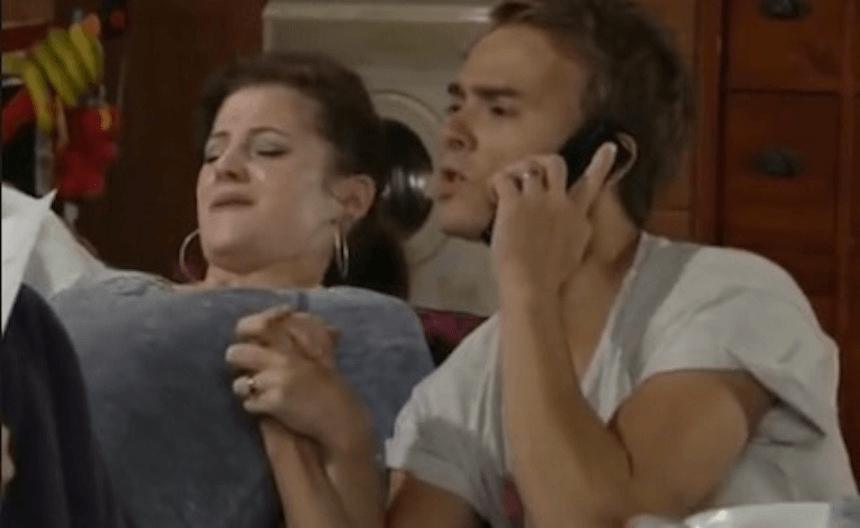 Kylie continues the decades-long Street birthing streak of labouring anywhere but in hospital.

By Danielle Moreau
Guest writer
Made possible by

Kylie continues the decades-long Street birthing streak of labouring anywhere but in hospital.

Danielle Moreau, the blogging mastermind behind Coronation St of Old, assembles her favourite Coronation Street moments of 2015 including a rare clip of Deirdre singing Rihanna.

We shouldn’t talk about Hayley’s death straight away, should we? We want to end this piece curled up on the floor sobbing in the foetal position, not start out that way. Let’s begin with something light: some camp little moments of gossamer to fortify us for the doom to come.

Character of the Year

Mary’s status as the most reliably delightful – if slightly disturbing – character remains unchallenged for another year. The writers have put so much effort into teasing her outlandish back story – she once had a Saturday job at a funeral parlour! She is known to the local constabulary for a vague incident involving a chainsaw! – that it would be devastating if she ever left.

Besides, she inspires her fellow actors to new heights in reaction shots. In every scene containing a Mary flight of fancy, another character is practically guaranteed to be able to use their best “WTF” face, as Deirdre does here:

Mary’s world-cuisine-themed restaurant nights, in which she took over Roy’s Rolls and later Nick’s Bistro for an increasingly elaborate series of meals, were one of the year’s minor delights. I am still mildly saddened that her planned Australian-Mancunian fusion dish of wallaby hotpot never came to fruition.

Now, strengthened by the thought of Mary’s chimichangas, we can move on to the heavy stuff.

Storylines of the Year

Kirsty and Tyrone’s horrible domestic violence saga dominated the start of the year. The greatest thing about this storyline – apart from Kirsty’s terrifying eyes – was the way the writers subtly expressed how these two damaged people came to be so co-dependent. Tyrone, his confidence sapped by the breakdown of his marriage and the discovery that a baby he loved was not his, easily fell into a pattern of being apologetic and desperate.

Kirsty’s abusive father had obviously influenced her in ways she found difficult to control. Where it got gloriously camp and soapy was with the wedding-that-never-was, in which Tyrone’s affair with Fiz was revealed to all at the service by a vibratingly-enraged Kirsty. Who can forget the great courtroom redemption scene, in which Tyrone finally gets his impossibly cute baby daughter Ruby presented to him by Kirsty, who is suddenly (and let’s face it, pretty unbelievably) remorseful.

The unknown paternity of baby Lily was a nearly year-long storyline which consisted of a series of freakouts. First Kylie freaked out that she was pregnant but possibly not to David. Once David found out that Kylie had slept with Nick, he freaked out – memorably standing on top of a cliff considering suicide. True to form, David decided to spend months implementing a secret vendetta against Nick for sleeping with his wife. This caused Nick (and by extension Leanne) to freak out. David caused a car crash which gave Nick permanent brain damage, which made the entire Platt clan freak out. Nick spent a lot of time clutching his head and occasionally shouting at his loved ones, causing the entire STREET to freak out.

Amusingly, the writers couldn’t let a year go by without another disastrous Gail love affair. It wouldn’t be Coronation Street without some scenes of Gail simpering obnoxiously at some unworthy bloke. This time it was with her mother’s erstwhile great love, Lewis Archer, who came back to exact revenge upon Gail for ruining his relationship with Audrey. He played the long game, eventually swindling Gail out of all her money and leaving her gobsmacked on the sofa watching his final DVD-recorded kiss-off. It was a scene both glorious and extraordinary.

The Rovers fire, the murder of Sunita and Carl’s subsequent frame job and cover-up was another slow-burning (pardon the pun) storyline. We knew that Carl was doomed to eventually get his comeuppance but couldn’t predict when or how. The writers led us on a merry dance with the dubious heroics of Dev, a man rightly convinced that his ex-wife was incapable of murder. In the end the key to Carl’s downfall was actually Beth Tinker’s rat-loving son Craig, who had seen Carl coming out of the Rovers at the crucial moment when he was meant to be doing some fund-raising stripping at Nick’s Bistro.

Since the actor who plays Dev spends most of his time chewing scenery and doing bizarre line readings worthy of William Shatner at his most eccentric, I’m sure it was a relief to most of us when Carl was finally dragged off to jail and the storyline was put to bed. We were left wondering why the newly rebuilt Rovers Return looked exactly like its previous incarnation, right down to the dodgy wallpaper, but I suppose the “if it ain’t broke” adage applies here.

We can’t forget Tina, whose entire life since her father’s untimely fake-death-that-wound-up-being-real a few years ago has careened from shitty, to more shitty. Becoming a semi-willing surrogate in order to pay off her boyfriend’s debts wasn’t enough drama – she had to go into premature labour, alienate half the Street by trying to keep Gary and Izzy’s baby, then get preyed upon by the insecurity-seeking womaniser-missile that is Peter Barlow. She also found time to get into a fistfight with Kylie, break Tracy Barlow’s pawn shop window, and get hit on by both Gary and Rob. It’s exhausting just thinking about it.

Hayley’s diagnosis of terminal cancer and assisted suicide cast a deep shadow over the last half of the year. Some of these scenes were very difficult to watch, and were made even more grim by the sudden disappearance of Roy’s mother Sylvia, who could have been relied upon for some snark. As it was, we were left to identify with bereft and bewildered Roy, a man who needed the warmth and sociability of Hayley, his (as he put it at her humanist funeral) “coruscating light”. No, don’t mind me, I’ll be over here sobbing and clutching a well-worn red anorak to my bosom.

Heroes of the Year

Hayley and Roy; the unlikely Dev; Tyrone and Fiz; Lewis (for giving us all one of the greatest moments of schadenfreude ever); Tina (for eventually doing the right thing and giving back that baby)

Villains of the Year

Numpties of the Year

Norris (eternally); Sally and Tim; rockin’ Dennis. Special mention to Paul, although his status as a numpty is fairly tenuous and could teeter over into the villainy section quite easily. He spent so much time moping, grimacing, and making dodgily racist remarks that it was a profound relief when he and Eileen couldn’t manage to work it out and he left.

In sum, it’s been quite a grim year on the cobbles: it contained arson, murder, assisted suicide, domestic violence, a vendetta, a traumatic brain injury, adultery, surrogacy and terminal cancer. This show really has no right to be so amusing. I’ll leave you with the late, great Anne Kirkbride as Deirdre, three sheets to the wind, wearing one of her signature string-of-circles belts, singing a glorious rendition of Rihanna’s ‘We Found Love’.

*Since New Zealand’s episodes are delayed but we now show three hours per week instead of the UK’s 2.5 hours, Coronation Street in 2015 on New Zealand television maps to 2013 and a wee bit of 2014 in the UK. It’s all most confusing.