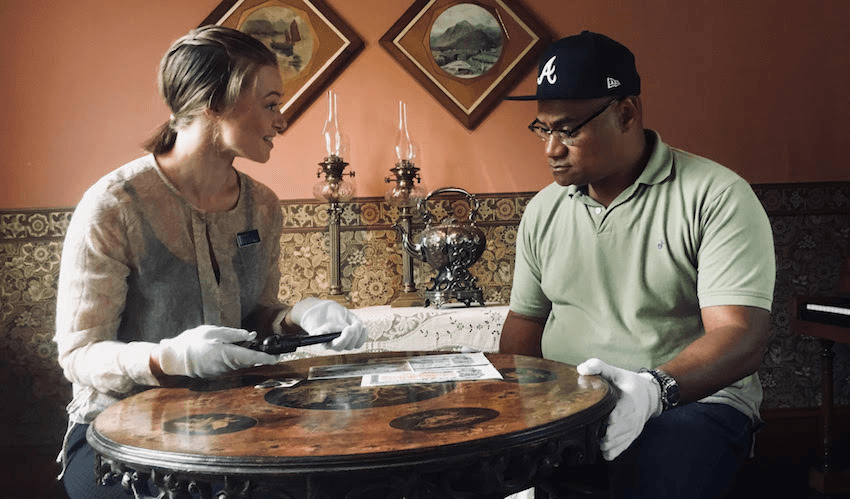 I would honestly be looking at that gun with equally as much apprehension.

I would honestly be looking at that gun with equally as much apprehension.

In Following Twain, which premiered on TVNZ One last night, Oscar Kightley follows the journey Mark Twain made around the country during his visit here in 1895. Sam Brooks reviews.

The appeal of a travelogue show is one that has always eluded me. It’s the travel version of edging – all of the mildly pleasant bits with none of the release. Travelogue shows are all the learning and the nice sights of travelling without any of the fun, or the memories. If you’re not into the host, or the specific places the host is travelling through, then it’s unlikely the show is going appeal to you.

Oscar Kightley’s new show about Mark Twain in New Zealand is described thusly: “Following Twain looks at the country the great author saw and wrote about. Over eight episodes, Kightley follows Twain’s path around New Zealand from Bluff up the South Island to Nelson then by boat to Auckland and back down the North Island to Wellington.”

If you don’t have any particular interest in Mark Twain, his 39-day journey through New Zealand in 1895, or in Oscar Kightley, then Following Twain has little to offer you. But, as someone who is a fan of Kightley, and of the 1995 film Huck and Finn starring Brad Renfro and Jonathan Taylor-Thomas, I was interested!

First up: I can only assume that Following Twain is a reworked version of Marcus Lush’s Twain Tour, funded to the tune of $890K five years ago by NZ on Air and then quietly… just not made, I suppose, until now. That series promised  “Marcus Lush [retracing] the 1895 journey of New Zealand made by Mark Twain. By land, train and boat, Lush follows in Twain’s steps, reading his little-known book about the journey and reimagining the New Zealand Twain waxed lyrical about.”

Kightley ditches the reading and instead goes the route of interviewing people in the South Island, while loosely following Twain’s journey. As trade-offs go, it’s not the worst idea. The increased focus on actual living New Zealanders means we get to see him talk to Lloyd Esler, who happens to be both an expert in dissecting rabbits and the execution of Minnie Dean – as chilling a double expertise as I can imagine – and also talk to a lovely Invercargill woman about how she’s sure that instant coffee was invented not just in New Zealand, but in Invercargill.

It’s these moments that give Following Twain its primary hook. Kightley is a personable interviewer, and he clearly knows how to take care of his interviewees while also gently taking the piss out of them. It’s hardly Nathan for You, or even Eating Media Lunch, but there’s a little bit more bite here than you might expect from a travelogue show, and it’s this personality that stops it from being the half-hour equivalent of slow TV.

While the official hook of the show is Mark Twain and his seemingly meandering trip around the country over a century ago, the primary appeal Following Twain is seeing what New Zealand looked, sounded and felt like back at the end of the 19th century – and also the little facts that come along with that knowledge. For example, I did not know that bankers carried guns right up until the 1970s! What a terrifying factoid to consider the next time I go into BNZ asking for another overdraft.

It’s possible, and I’d say inevitable, that the show’s focus changed somewhere between Twain Tour and Following Twain– maybe Kightley’s interest is more in the New Zealand of that time than Twain’s journey in particular – and I can’t help but feel the show is better off for it. Kightley has a genuine curiosity about 19th century New Zealand, and is able to riff on it in a way that injects the show with a little more life and vim than you’d expect.

As with any travelogue show, it boils down to one thing: “How interested are you in [insert travelogue subject here]?” And if you’re interested in late 19th century New Zealand, go hard.