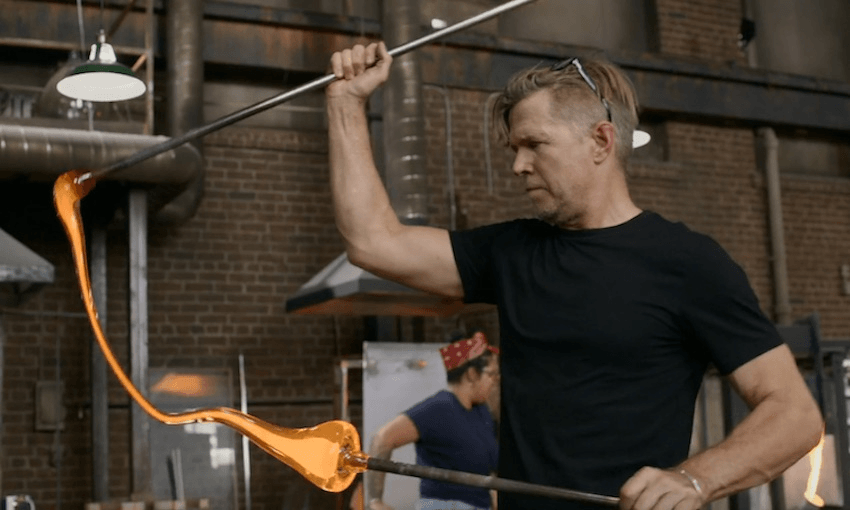 Review: Blown Away is the most gripping reality show since the British Bake-Off

If you’re a fan of thrilling skill-based reality contests, Blown Away is the show you’ve been waiting for. Tara Ward reveals why you’ll fall in love with Netflix’s latest sensation.

If you think the Earth needs another reality TV show like it needs a glass light fitting that looks like a diver’s helmet, then think again. Netflix’s Blown Away is the reality show you never knew you needed, a wholesome TV comfort blanket made of style and creativity, and with more double entendres than Tart Week on the The Great British Bake Off. In fact, Blown Away is much like The Great British Bake Off, but with glass. And glory holes.

Blown Away is the Canadian reality show where ten glass artists compete to win a $60,000 prize and a residency at New York’s Corning Museum of Glass. Every episode, contestants are given a brief to create a piece of blown glass art, which will be judged on design, creative bravery and technical skill. The winning contestant is named ‘Best in Blow’ (you betcha), while the lowest scoring contestant is sent home, having failed to, you guessed it, blow the judges away.

If you think a show about glassblowing would be batshit boring, think again. Blown Away is hot and sweaty television, and tensions run high. I thought reality TV couldn’t get tenser than the time on GBBO when Iain’s Baked Alaska was mysteriously removed from the freezer, but the moment on Blown Away when Annette accidentally tapped her glass robot and it broke into a million pieces on the ground made me gasp like never before.

The contestants are all professional glass artists, and this is their chance to show the world how brilliant they are. Week after week, they need to come up with astonishingly imaginative ideas and bring them to life in glass form. One wrong move or misjudged tap, or if the glass is too hot or too cold, then the work they’ve spent hours shaping and stretching will shatter into pieces. These artists are forever a single mistake away from disaster, and god forbid another artist stuffs it up for them by taking too long to shut the annealer door.

They’re literally playing with fire and it is EVERYTHING.

Just like GBBO, the contestants make the show. There’s a perfect mix of creativity, confidence and eccentricity, and each artist has their own distinct point of view. The super experienced and assured Janusz has been working with glass for 30 years, Japanese glass artist Momo is determined to give artistic representation to other cultures, while 22 year old Edgar is the youngest contestant. They’ve pulled together an intriguing mix of experience and personalities, and somehow, it works.

My fave is fierce feminist Deborah, who says exactly what she thinks. “I’m a very polarising person,” she says. “I have lovers, and I have haters.” Deborah is blunt and bold, and she unapologetically claims her space in that hot shop (a space traditionally held by men) in a way that often annoys her fellow contestants. She’s a force to be reckoned with, but she also whips up a giant potato, a Venetian-style taco holder, and a futuristic ‘Man-Bun-In-The-Oven’ Robot out of glass. OUT OF GLASS, YOU GUYS.

The contestants of Blown Away aren’t artists, they’re magicians.

Best of all, Blown Away is a beautiful show to watch. There’s a medititative rhythm to it, with its primal focus on heat and cool and light and dark. The artists push and blow for hours on end, fighting gravity and perfecting their timing to bring their ambitious ideas into reality. It’s mesmerising to watch them transform cold colour blocks into glowing balls of hot lava, and then into fragile works of art. Once Blown Away chucks in some slow motion montages and jaunty music, watching is like poetry in motion.

The only thing missing from Blown Away is a light touch, a Mel and Sue-type presenter who pops up to make the most of those double entendres, and to remind us that life shouldn’t be taken too seriously. But if you’re looking for a fascinating show to remind you that the world is filled with talented people doing incredible things, you won’t go wrong with Blown Away. At the very least, you’ll discover the difference between your punty and your glory hole, and who doesn’t want to know that? Blown away, indeed.