Sam Hammington was discovered after raising his hand on a whim to be an audience participant at a comedy show. Now he’s one of the biggest names in Korean television.

In 2013, a fan approached Sam Hammington for a selfie on a crowded street in Itaewon, a cosmopolitan neighbourhood near the centre of Seoul. It was a novel experience for Hammington, whose popularity was surging after appearing on a reality TV show called Real Men, in which local celebrities simulate life in the Korean army. As he posed, more and more fans approached. “All of a sudden it was like 20 or 30 people just around me, waiting for a photo,” he says. “I was just like ‘oh my god, this is actually a little bit intimidating.’”

Hammington was discovered eight years earlier after being chosen to come on stage at a comedy show in Seoul. “They expected this white guy to come down and not speak any Korean,” says Hammington, who studied the language at university. Among the audience were the writers of a sketch comedy TV show called Gag Concert. They offered him what was supposed to be a one-off guest appearance on an upcoming episode and he turned down a permanent job as an English teacher so he could make it. He soon became a series regular.

Hammington, who is 43 and was born in New Zealand but grew up in Australia, says he’s now recognised every time he goes out in Seoul. Since 2016, he’s been a cast member of a wildly popular reality show called The Return of Superman, which depicts children bonding with their celebrity fathers while their mothers are absent. 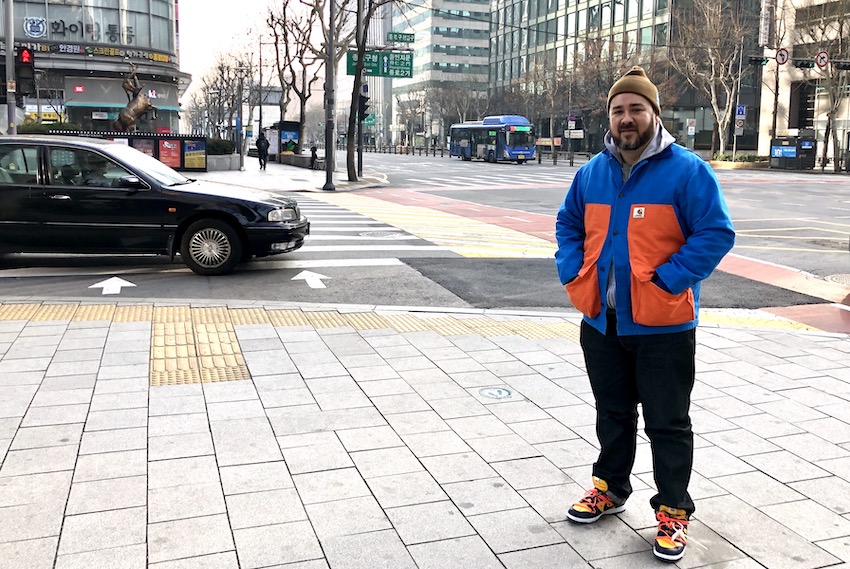 I meet Hammington in Seoul’s Jongno district on the first day of the Korean new year holiday, a time when many businesses shut down, and the city is extremely quiet even though panic about the coronavirus is yet to set in. The third-wave cafe Hammington suggested is closed, so we go to a Starbucks around the corner instead.

“I feel absolutely knackered right now,” he says. For the past few days, he’s been filming a new show where celebrities travel across the country competing in challenges that determine whether a team sleeps inside or outside. The previous evening, he made the four-hour journey back to Seoul to appear on a talk show and didn’t get home until 1.30am. “I was in the middle of filming last night and all of a sudden this haze just came across my eyes.”

Bong-gyu Kang, the creator and chief producer of The Return of Superman, says Hammington is a fan favourite and describes his parenting style as “silly”, “bubbly”, and “fun”. “You have to leave childrearing to Sam” is a common refrain among online commenters, he explains. In Hammington’s first episode, he’s depicted as a physically affectionate father who gets his son into hysterics by affecting goofy voices.

But in person, I’m surprised by how serious he is. “I come across as being a lot more jovial, a lot more fun,” says Hammington, who sees performing a heightened version of himself as a job he clocks off from when the cameras stop. “I’ve had people walk up to me, I’ll be at an event, and they’re like, ‘you’re not having fun’. I’m like, ‘I’m having a great time’. And they’re like, ‘but you’re not smiling, you’re not laughing.’” Sam Hammington on Gag Concert, which he describes as the most uncomfortable thing [he’s] ever done. (Photo: YouTube)

Hammington had no comedic experience when he joined Gag Concert, which was filmed in front of a live audience. He describes making jokes in his second language as “the most uncomfortable thing I’ve ever done in my entire life … You say something that you think is incredibly funny and it gets no reaction”. He feels more at ease in the reality TV roles he pivoted to afterwards.

On The Return of Superman, Hammington stars alongside his four-year-old son William and his two-year-old son Bentley. His wife, Yumi Jeong, also makes occasional appearances. Despite having more than a million Instagram followers each, his sons have not been told they’re on television and are unaware of their fame. Fans are particularly enamoured with watching Bentley eat, and a 38-minute YouTube supercut called Bentley’s Love for Food has 1.2 million views. The first clip shows him clasping two baby forks with half a quail skewered on each, before cutting to various scenes of him savouring mouthfuls of watermelon, lobster, octopus, and beef ribs.

Like many Korean reality shows, The Return of Superman relies heavily on inserts – animation and subtitles superimposed over footage. The effects give otherwise mundane scenes the freewheeling dynamism of a cartoon. In one episode, Bentley sits on Hammington’s lap while waving a half-eaten sausage on a stick as if he’s casting a spell. Subtitles appear describing him as “the deity of sausages” before a red aura envelops his body and lightning bolts begin sparking from his sausage wand.

Kang reviews the inserts of every episode, he tells me over coffee at the Korean Broadcasting System headquarters in Seoul, an enormous complex covered in satellite dishes where The Return of Superman is produced. Two years ago, activists complained about inserts perpetuating antiquated gender norms, like subtitles about the physical appearance of the show’s young girls. Kang says he’s now careful about avoiding future “subtitle accidents” and aims to create a progressive show that encourages fair division of household labour.

But Grace Jung, a teaching fellow at the University of California and former Fulbright scholar, argues that KBS – a tightly controlled state-owned broadcaster – is encouraging equitable parenting on The Return of Superman not as an end in itself, but to promote the state’s pronatal agenda and reverse one of the lowest birth rates in the world. In a 2019 paper, she describes the show as in line with policies “designed to bait women back into the domestic sphere” that reduce citizens to their “biopolitical value”. Both Hammington and Kang’s favourite episode is the one with footage of Bentley’s birth. At first, Hammington worried it was too intimate to televise, but says it would have been “unfair” on fans to keep “such a powerful moment” from them. “Birth is miraculous,” says Kang. “So many people these days choose not to have children, and I think it’s our responsibility to show how incredible the birth of a child is … tears come to your eyes for no reason when you see a child being born.”

A highlight video of the episode has almost five million YouTube views. In the moments after Bentley’s birth, a cartoon leaf hovers below his umbilical cord and subtitles appear saying, “the world’s best gift, the birth of their child”. The video has hundreds of adoring comments. Many express a yearning to emulate Hammington’s family. “I wish I could have a supportive husband and healthy baby like queen Yumi,” writes one commenter. Another says they used to find children annoying, “but Bentley changed me”, they write. “Now I love children.” Hammington’s mother, Jan Russ, is a well-known casting director who worked on Neighbours. She launched the careers of Kylie Minogue, Guy Pierce and Russell Crowe and also facilitated Hammington’s brief stint as a child actor. “I was Jan Russ’s son, I was never Sam Hammington, I never had my own identity,” he says in a 2014 ABC documentary about Russ. “It seems like the tables have turned somewhat. Mum’s flying over and being a part of TV shows that I’m involved in. She’s now Sam Hammington’s mother.”

Now that he’s found fame in his own right, Hammington sometimes feels ambivalent about inducting his own family into the entertainment industry. “Obviously we don’t have as much of a private life as we would have liked,” he says.

During my interview with Hammington, a man approaches our table to ask for a selfie. Hammington obliges and reaches for the fan’s phone to take the photos himself. The fan, a 58-year-old retired civil servant called Su-young An, tells me he watches the show with his wife every week. “The children are so cute,” he says, adding that he loves the way Bentley devours food. “The expression!” he says, laughing. While most fans are respectful, Hammington says they sometimes make him uncomfortable, especially when they yell his children’s names in public or take photos of them without permission. Once, a stranger rang his doorbell early in the morning and asked to see William and Bentley. “My wife said very sternly, ‘no, this is our private house,’” says Hammington.

When I ask about the wellbeing of children growing up in the entertainment industry, Kang admits that The Return of Superman’s critics have raised similar concerns. He acknowledges that it may cause stress, “but I believe that they benefit much, much more than what they lose”, he says, referring to the show’s facilitation of family bonding.

Hammington also weighs benefits against losses. He says it’s sometimes “hard to tell” whether his kids are truly enjoying themselves in front of the camera, but believes certain moments make it “all worth it”. He describes an episode in which an overjoyed William plays in the snow with an actor dressed as Pengsoo, a popular penguin character. “I don’t think he even laughed like that with me,” he says. William Hammington playing with Pengsoo in the snow (Photo: YouTube)

He was more conflicted when he first joined the show and his early parenting efforts were televised. “I was scared, I didn’t know what I was doing,” he says. “One of the first couple of episodes I filmed, I had a breakdown.” The show amplifies this inexperience in his 2016 debut, depicting him as a cheerful but bumbling father archetype with the hamminess of a 90s sitcom. In one scene, he’s too fixated on an American football game to notice his son.

He’s portrayed as more competent in later episodes. Unlike his bubbly persona, Hammington says the development is genuine and he now feels confident parenting both onscreen and off. “There’s no written rule saying you have to do this, you have to do that,” he says. “Don’t get lost in what you think you should be doing. Just get out there and do it.”

With so much public scrutiny, he understands not everyone will agree with his choices, though. “Everyone’s got an opinion,” he says. “I’m gonna parent the way I parent … I’m just gonna do what works for me and my kids and go with the flow.”

Thomas Phillips travelled to Seoul with funding from the Asia New Zealand Foundation.