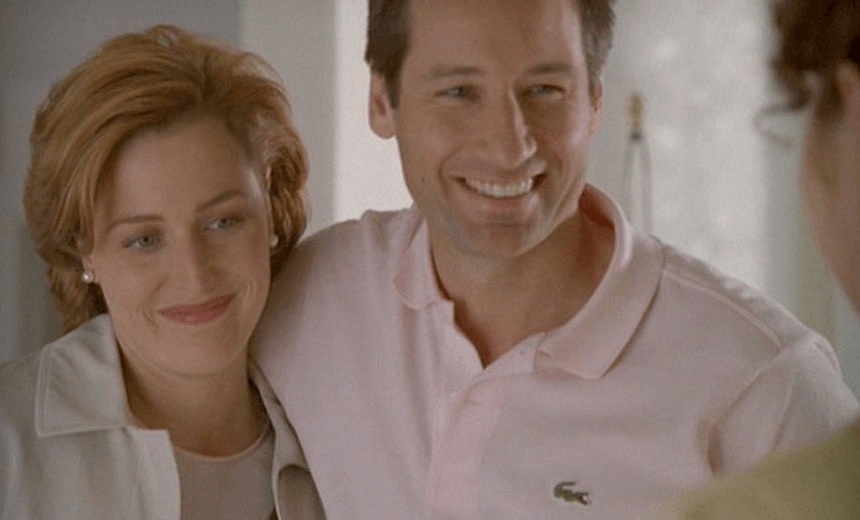 By Ellen Moorhead
Guest writer
Made possible by

Tonight the X-Files returns to our screens with the first new episodes since the original series – now streaming in its entirety on Lightbox – bowed out in 2002. In celebration of this momentous occasion, Ellen Moorhead picks her most ridiculous ‘monster of the week’ episodes of all time.

Fox Mulder and Dana Scully AKA the President and First Lady of all television ever (you decide who’s who) will be gracing our screens this week, for the first time in fourteen years. My emotions surrounding the X-Files revival are currently sitting somewhere between paralysing excitement, total fear and a little bit of a vomit feeling.

In the meantime, while we all wait to be enlightened or horribly disappointed, here’s a list of some of the good-weirdest and bad-weirdest, non-Mythology Monster-Of-The-Week episodes from Seasons 1 to 9, otherwise know as REAL X-Files, otherwise known as the biggest hug your TV could ever give you.

Lord Of The Flies

In a twisted metaphor for puberty, a teenage boy controls bugs with his unruly teenage emotions, be they his emo angst or morning boner. Bullies get their brains eaten by flies and PR-rated obscenities chewed into their skin by some lice. It also turns out his mum is half bug too. In classic early 2000s style, this episode was heavily influenced by Jackass and the rising popularity of videotaping your own stupidity. Basically, the plot is about how horrible teenage boys are.

Final Verdict: Robert Patrick thought this episode was too silly and TBH so do I. Teenage boys do suck though.

Guest Stars: Deep Roy (the guy that plays all of the Oompas Loompa in Tim Burton’s annihilation of Charlie and The Chocolate Factory)

I am just going to go ahead and sum this one up with a single sentence:

How The Ghosts Stole Christmas

This is the first episode I watched where I thought, “Wow. They’ve actually lost it.”

It’s Christmas Eve and a couple of elderly ghosts try to convince Mulder and Scully that they’re secretly in love with each other when they investigate a haunted house. Which is not a very hard job since Mulder and Scully are always one glass of wine away from the show being called the XXX-Files anyway. Books float, fireplaces magically light, doors disappear, Mulder and Scully SHOOT EACH OTHER AND BLEED OUT ON THE FLOOR only to get up and walk out of the house, hunky bloody dory. HOW AM I SUPPOSED TO BELIEVE IF YOU DON’T GIVE ME ANY EVIDENCE TO GO ON, I MEAN REALLY.

Final Verdict: This is actually one of the worst episodes of the entire show.

Guest Stars: Michael Emerson (that guy from Lost) and Al Bundy’s son from Married With Children

A lonely man with telekinesis alters his house to looks like the Brady Bunch set but also accidentally kills a couple of stoners who break in. This episode could have been injected literally anywhere in the final season, it has no point whatsoever and is completely ridiculous. But instead they decided to make it the SECOND TO LAST EPISODE OF. THE. ENTIRE. SERIES. Extra points lost for terrible special effects and no Mulder.

Final Verdict: A terrible almost-end to a mostly terrible season.

Burt Reynolds is god and is very good at gambling. There is a man murdering women and about 5 minutes into the episode Agent Monica Reyes miraculously figures out that he is working through a pattern of moon numbers or chakra figures or something like that. Monica does this a lot and it is very annoying.

The episode peaks with Monica and Scully locked in a car park, with God, playing checkers. It turns out that the ladykiller has been chilling in the car park the whole time, politely waiting for the game to finish before he tries to do some murders. Fortunately, John Doggett saves the day.  Meanwhile Burt Reynolds sings a lot of French language songs while dancing around little Italy and all the people join in like it’s bloody Mamma Mia.

THIS EPISODE IS PRETTY MUCH AN EPISODE OF COPS. There’s real time footage filmed by the actual COPS crew and even the COPS theme song. But then Mulder and Scully show up, Mulder is wearing a turtleneck, Scully hates the camera and FEAR ITSELF is plaguing a small neighbourhood. Mulder fails to catch the bad ‘guy‘ and is embarrassed in front of all American TV watchers AKA everyone ever.

While Mulder and Scully investigate an ancient bowl that can raise the dead their shadowed by an annoying filmmaker pal of Assistant Director Skinner AKA The Skin Man. The real life element of this story, which includes DANCING SKELETONS is equally as ridiculous as the movie that is made in the episode, starring Dave Duchov’s IRL wife of the time, a red-wigged Téa Leoni as Scully and Gary Shandling as Mulder. LOLs aplenty including Scully teaching Téa how to run in heels, references to Mulder’s porn habit and Skinner being super pleased that the guy that plays him is buff as hell. Also this episode was DIRECTED BY DAVID DUCHOVNY.

Final Verdict: A+ would watch again and again.

Guest Stars: Shia LeBoeuf’s dad from Even Stevens and Jerry the cuddly receptionist from E.R.

Mulder and Scully pretend they are husband and wife duo Rob and Laura Petrie in order to investigate a Stepford-esque neighbourhood where people disappear if they don’t fit a mysterious code of conduct. They then have to fight a GIANT MONSTER MADE OF GARBAGE who is being conjured by the leader of the neighbourhood watch. Which to be honest you kind of expect from an old guy who likes Tibetan statues and never opens his curtains. So yeah watching this episode is a bit like living in Remuera.

Final Verdict: One of my favourite stand-alone episodes due to the high number of cheeky Mulder and grumpy Scully moments.

Guest Stars: No guest stars in this shocker of an ep.

Taking the idea that cat’s are assholes to a whole new level, an Ecuadorian artefact causes a neighbourhood of sewer cats to turn murderous. This episode is rife with dubious depictions of Ecuadorian culture; think awkward chanting and people in ponchos getting lit as hell on some magic juice around a fire. Scully seems especially grumpy for the whole thing. This might be because Gillian Anderson is allergic to cats IRL and in the final attack scene the producers were forced to throw taxidermy rabbit fur cats at her face instead of real ones. Also there is not enough Mulder or Scully screen-time so deduct one million points.

Final Verdict: This episode was re-written a million times and you can totally tell.

Still want to believe? Click below to watch The X-Files on Lightbox