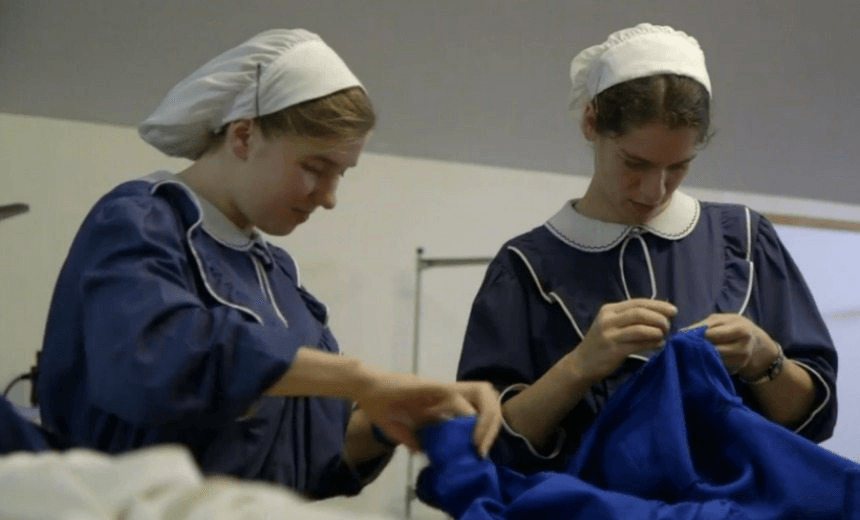 Gloriavale: Where a woman’s place is submissive and pregnant

Calum Henderson asks why our taxpayer money continues to fund rose-tinted documentaries about the sexist hellhole known as Gloriavale.

Our annual visit to Gloriavale is becoming a weird New Zealand television tradition. Every winter for the past three years we’ve been offered another rare glimpse inside the controversial West Coast Christian community, through a series of documentary specials which increasingly seem to be little more than a NZ On Air-funded PR exercise for one of the country’s richest churches.

Wednesday night’s installment, provocatively subtitled A Woman’s Place, presented a particularly rose-tinted view of life inside Gloriavale. It focused on two women: unmarried 22-year-old Dove Love and Angel Benjamin, a married woman in her late twenties who was expecting her sixth child.

The special’s entire thesis was laid out in the opening voiceover. “[Gloriavale] women still live in submission to their husbands and do what they say,” remarked the male narrator, before shrugging “but [they] seem to be happy with that arrangement.” Over the following hour it never really got any deeper than that – they’ve been indoctrinated from birth to accept a life of servitude, and weirdly they seem fine with it! Oh well!

Everything that has or will ever happen to these women in their lives is simply a result of God’s will. “I can’t do anything to get pregnant,” claimed Angel, “God just gives me the baby when he wants me to have it.” She gave birth to her sixth child on a still summer’s night. “It was easy,” said her husband.

Dove, who stole the show in last year’s Gloriavale: Life and Death with a painfully detailed account of the logistics of doing washing for over 500 people every day, was still hard at work in the industrial laundry this year. She also does shifts in the kitchen and as a seamstress, meaning she has her finger in the pie of just about every job available to a woman at Gloriavale.

A Woman’s Place followed her ascent to the most glorious job title of all: wife. The community’s council of elders met and decided to set her up with 17-year-old Watchful Steadfast, the pair to be married in a double-header with her sister Jemima and her partner Hopeful.

Dove described Watchful’s proposal as if she was delivering a victim impact statement: “I heard footsteps on the porch, then I heard a young man’s voice and my mum and dad talking… I went in and he was just standing there with the flowers.”

Dove is an endearing figure – individually, most Gloriavale members seem kind and likeable, even if the community as a whole still feels deeply sinister. Nowhere was this feeling more palpable than at the wedding.

As Dove and Watchful and Jemima and Hopeful slipped away to consummate their marriages, their celebrant offered the room an unpleasant explanation of what they would be getting up to: “God has given something wonderful to the human female,” he crowed. “He has given her a seal, a guarantee! And that guarantee and that seal is to be given to her husband. He is the one to open it, and that is what marriage is about…”

The man speaking was Hopeful Christian, aka Neville Cooper, a founding member of Gloriavale who in 1995 was found guilty on three charges of sexual abuse of young community members. No acknowledgement of that, or any of the myriad other dark clouds which hang over the community, during Wednesday night’s visit.

Instead Gloriavale: A Woman’s Place ended up being a lot like its subjects: unfussy and cheerfully uncritical, completely unwilling to rock the boat by asking a single tough question. Whatever it takes to be invited back next year.