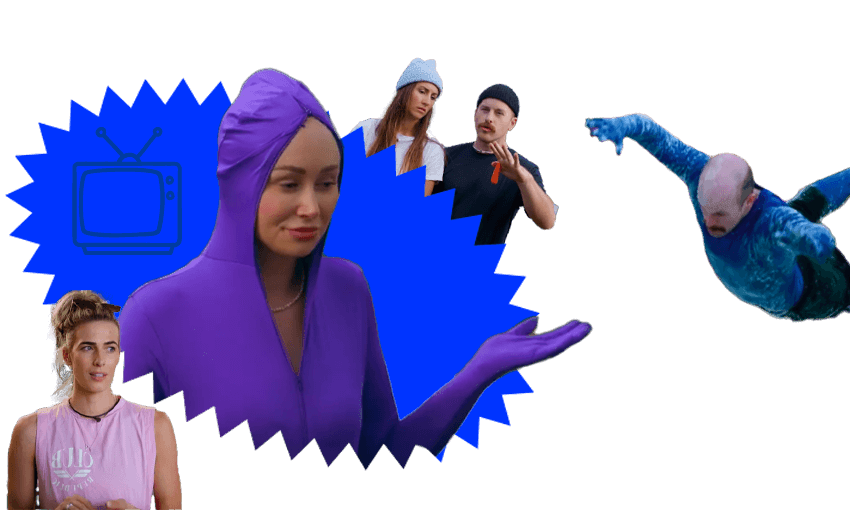 The Block NZ: Everything we learned during children’s bedroom week

Has Mark Richardson’s piercing peep to signal the end of the working week been a lie this whole time?

Welcome back to the building site of dreams, where our four Block NZ teams just tackled the second room on their long journey to redemption. It was children’s bedroom week, and teams were given a tight budget to create some kid-friendly design magic. They also went on a massive slip’n’slide, which looked a lot more fun than sanding wardrobe doors. What a week, what a lifestyle. Let’s slide straight into the drama.

1. Ben and Chloe prove that winners are indeed grinners

What a week for Team Blurple, who lived, laughed, loved their way to creating a winning kids’ bedroom. Chloe and Ben leaned hard into the hijinks this week by waving a carrot at the camera, enjoying beauty treatments and discussing if you should wear undies under painting overalls (you definitely should). They also pulled off an impressive teenager’s bedroom the judges thought was “stunning” and “beautifully finished”. Is this the first pair in Block NZ history to simultaneously have fun and win a room? Absolute dream team.

2. The truth about Mark’s “tools down” whistle

For the past nine seasons, Mark Richardson has made a long, piercing whistle to signify the end of every Block NZ week. It seemed he had a rare gift, one usually reserved for high country farmers, producing a breathy blast so sharp and fierce it could wake the dead.

This year, however, it has been more wheeze than whistle. It begs the important question: has Mark’s tongue been lying to us this whole time? Was his old whistle merely a dubbed-over sound effect that deceived us for nine long years? Will the real Mark Richardson whistle please stand up?

3. It is possible to stick to budget on The Block NZ

Times are tough, and The Block NZ’s purse strings have never been tighter than this season. First the Bank of Mark was shut down, then the teams were ordered to stick to a budget of $10,000 for their kids’ bedrooms or face elimination. Apparently $10,000 barely covers the price of a beanbag and a fancy squab these days, let alone Gib and paint, but somehow the teams battled on. Nobody was eliminated, and the Block NZ economy lives to fight another day.

Last week judges Jason and Shelley urged the teams to be bolder with colour, so this week the teams responded with mostly white walls. Maree and James whipped up a delicious two-tone design in their children’s room that Jason adored but only scored a seven, while Quinn and Ben earned an eight for a room filled with white paint. Adam and Stacy’s bedroom confused Jason so much he gave them a measly five points, but both judges adored Chloe and Ben’s “beautifully finished” room, rewarding Chloe with her first ever room win.

The building site wasn’t the same without Pete Wolfkamp, who was stuck at home in isolation. Instead of his usual on-site inspections, teams were treated to a Zoom call from inside The Wolf’s secret lair, which revealed nothing but a shed full of tools. Incredible stuff.

5. The Walking Ribenas are back

The unspoken rule of The Block NZ is that to win thousands of dollars, sometimes you have to wear lycra on national TV. This week’s bonkers challenge saw teams clamber into bodysuits to hoon down a slip’n’slide, catching balls and throwing them into a hoop to answer quiz questions about past Block NZ seasons. The odds were stacked against Adam and Stacy, who have only watched their own season, but the true player of the day was Ben for his outstanding commitment to both the slip and the slide.

6. The fourth wall is well and truly broken

The fourth wall of The Block NZ has been knocked out and sold off for scrap. From Stacy’s death glare down the barrel in response to being given a $10,000 room budget, to Ben’s knowing glance to camera when Quinn responded to their finished room exactly as he predicted, to Maree and James rehearsing their responses for the camera, The Block NZ is turning into an unexpected hybrid of The Office and Changing Rooms. No complaints here, love to see it.

7. Ben and Quinn continue to be the best

Last week we called Quinn and Ben the nation’s prince and princess, this week we watched Quinn dust her doors with a pair of Ben’s jocks. If that’s not love, I don’t know what is.

8. The Block NZ is the most relaxed it’s ever been

What is this, a holiday park? Three teams finished hours before room reveal deadline this week, and we’ve never seen so many contestants having such a chill time. Will this cruise mode continue all season? With next week being family bathroom week, it seems… unlikely.

“The tingle’s not gone,” the nation’s favourite builder said about something, sometime this week. No idea what he meant, but he’s almost certainly correct.

The Block NZ: Redemption screens Monday-Wednesday on Three at 7.30pm.