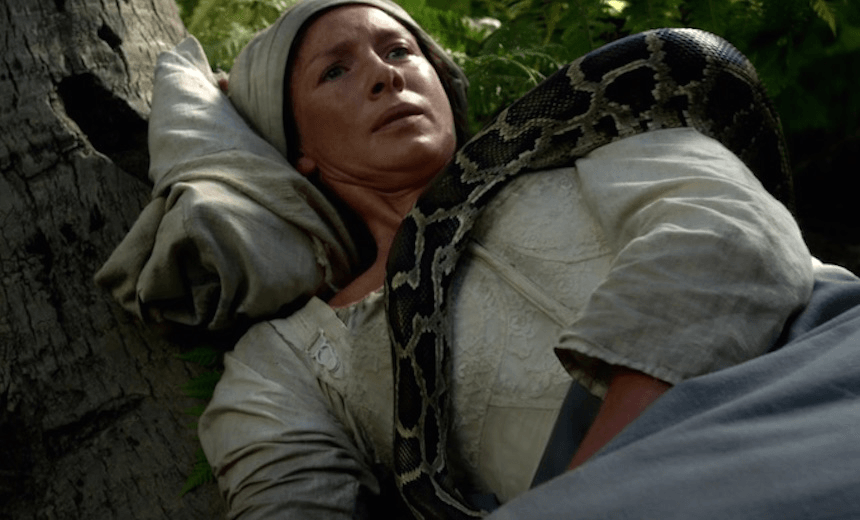 Outlander recap: Claire wakes up with a python

This morning I woke to the crushing news that I am no longer engaged to Prince Harry. Thankfully, one can always rely on Outlander to soften life’s cruel blows with a soft, billowy cushion of ginger joy.

We’ve been joined together in holy matrimony with Outlander for three glorious seasons and weathered many storms, like Claire being a travelling minstrel and Jamie’s collection of bad wigs. But this week, dearest Outlander, you officially outdid yourself on the ‘Batshit Crazy Stuff That Happens’ scale, and frankly, I’m as happy as Meghan Markle trying to cook a roast chicken.

Your honour, may I present Exhibit A: Claire talking to a coconut.

Coco was the all seeing, all knowing coconut living with Father Fogden and Mamacita, strangers who took Claire in after she wandered onto their jungle ranch in search of civilisation. When I say “took in”, I mean they tied her to a bed and covered her legs in gunge. Yes, they live in the middle of nowhere and yes, they keep their dead daughter’s dress on display and yes, they take life advice from a coconut.

But I’ve heard it straight from the coconut’s mouth: it’s fine. Doesn’t everyone find themselves trapped in a house with a bonkers priest, his angry mother-in-law and their hairy nut, at some point in their life? No? Just me, then.

Claire’s plan to swim to Jamaica to stop Jamie being hanged for murder had gone terribly wrong. This was a huge surprise, almost as surprising as Claire trying to convince a coconut to take her to the nearest village. Listen, desperate times call for desperate measures, and to be honest I’d whisk Coco away for a luxury mini-break in a 5-star hotel if it meant I’d see this face again.

Also, I want someone to look at me the way Father Fogden looks at his coconut. Or maybe Arabella, his dead goat. Whatever, I’m not choosy.

RIP Arabella the Goat, who died so that Claire could follow the path of goat blood straight into Jamie’s arms. Claire and Jamie’s emotional reunion was so passionate that the tides became confused and the moon was lost and the entire world was pushed off its own axis. Thank you, precious Arabella, for sacrificing yourself so that others may enjoy the greater good, aka endless Fraser sexy times.

The Frasers were back together and all was well with the world. Father Fogden married Fergus and Marsali, Claire jammed a hypodermic needle into her own arse, and Yi Tien Cho’s turtle soup had the Frasers rocking the love boat like never before. FYI, drunk Claire is bloody awesome, and it’s a shame karaoke didn’t exist in 1768 because she’d have slayed ‘Like A Prayer’ like the sozzled queen that she is.

Also, can we please make wild baaing noises about the fact goats were crucial to the storyline for the second week in a row? Who knows what goats do all day – backgammon? Zumba? – but the sooner they get the credit they deserve, the sooner we can all pile onto the love boat and sail to Paradise, where the coconuts run free and the potatoes grow wild and we can drink turtle soup forever and ever Amen.

I’ve consulted my own psychic coconut, and the results are in. Let’s run along the beach and launch ourselves into the arms of the top ten moments of ‘Unchartered’.

Where’s a herd of wild cattle when you need them? Asking for a friend.

Look, his spyglass acting was incredible and his running game was sensational but I’m not sure it gets any better than a sun kissed Jamie Fraser carrying ropes along a beach while looking wistfully at the horizon.

3) Claire wakes up with a python

Not even Coco saw this coming.

FYI Claire’s snake face is alarmingly similar to my ‘I can’t believe I’m not going to marry Prince Harry’ face.

I’d be more worried about the bloke talking to a coconut, but each to their own.

5) Jamie looks through a spyglass

Of all the beaches, on all the islands, his crazy wife had to rock up on this one.

6) Jamie and Claire are back together like peas and carrots

Reunited, and it feels so gooood.

7) Fergus’ face when Jamie gives him the Fraser name

Sweet baby cheeses, Fergus is as proud as the time he rode the tiny donkey at Lallybroch.

They were laughing together for crying out loud WHAT IN THE FRESH HELL DID WILLOUGHBY PUT IN THAT SOUP.

Fergus played a mean scarf game, Marsali had her newlywed horn on, and goats all over the Caribbean tapped their tiny hooves together in joy.

Click below to watch Outlander season three, available express and exclusively on Lightbox: