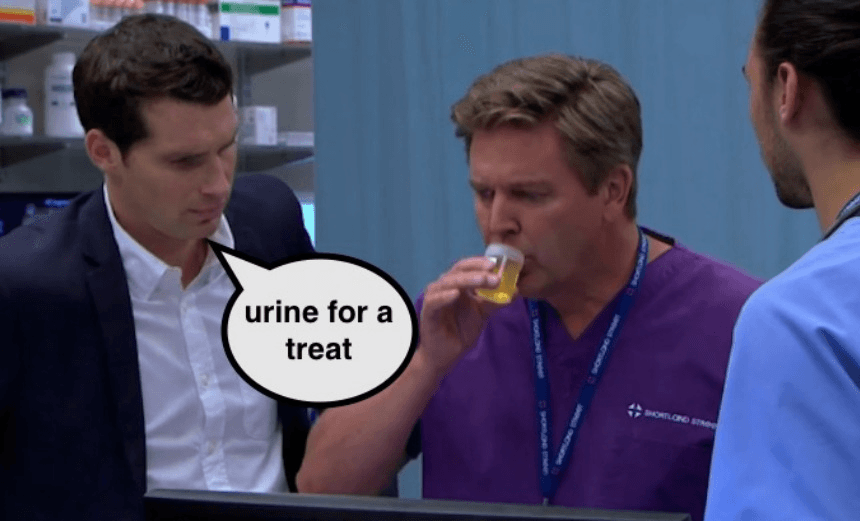 1) Leanne is a sight for sore eyes

Leanne, I bloody love you. Every week you deliver the goods like a middle-aged, semi-psychic equivalent of ParcelPost. “You’re off your rocker!” Murray reckoned, after Leanne recounted her terrifying vision of him drowning at sea, surrounded by fish. Gurnard? Terakihi? Psychic Sally was suspiciously short on details.

Despite her alarming premonition, Leanne had no qualms at waving Murray off as he set sail for sunny Fiji. Sailors of the world rejoice – Leanne’s apparitions only apply to residents within the Auckland nautical boundaries.

2) Kylie’s milkshakes bring all the surgeons to the yard

It was Boobapalooza in Ferndale this week, as Shortland Street broke a long-standing world record for saying ‘boobs’ 27 times in one episode. There were boobs everywhere: Kylie’s genetically faulty ones, plus the annoying duo of Chris and Drew, who argued about which boob should remove Kylie’s boobs. ‘Boobs Removing Boobs’ – that’s Chris Warner’s autobiography title sorted, then.

3) Murray sails off into the Fijian sunset

It’s been four weeks since Wendy died, so it’s no wonder Murray’s ready to move on. “Her chickpea curry wasn’t even that good!” he said, as he heard the warm waters of Fiji call his name. “Bula, Murray,” they sang. “Come and marvel at our warm waters and extensive varieties of fish”. Did someone say ‘extensive varieties of fish’? Murray’s out of here like a bald man.

5) Chris does his bit for workplace morale

We all know that George is as exciting as a wet weekend, but Chris was determined to lighten the wispy-haired doctor up. Enter the age old, never fail, world famous, TOTALLY HILARIOUS ‘pretend to drink patient urine when really it’s apple juice’ trick. George is a doctor genius who spent a gazillion years in medical school, surely he’ll know a joke when he sees one?

No. But good on you, Bear Grylls, for giving your colleagues so much joy.

Workplace pranks are SO funny, aren’t they?

6) Victoria puts a spell on Mo

I want to applaud Victoria’s bold-faced arrogance while simultaneously throwing a shoe at her head for being so freaking annoying. If only she’d turn her evil powers to good, rather than bewitching Mo with her shiny hair and well-ironed uniform. I don’t care if she knows where the amazing kebab stands are (at the beach, FYI), Victoria must be stopped. Quickly, before I find my shoe.

Boyd and Bella’s romance continued to blossom at a giddy pace. Romantic highlight of the week: their hands touched as they sat on the couch. OMG, you guys! If this impulsive behavior continues they’ll be hugging by Easter, snogging by September and sexting during the Christmas cliffhanger.

8) Harper finds that laughter is the best medicine

Like a leaky tap that needs a new washer, Harper dribbled on about Drew’s shooting. She nearly burst a vein in her excitement to blab that Nicole and Victoria were both shooting suspects for stinking out the hospital with their Valkyrie perfume, and cackled hysterically once the secret was out. Fair enough, attempted murder is right up in the funny stakes with urine drinking and drowning in a sea of fish.

It was a week of secrets and shocks, parties and piss-taking. Will Leanne’s next vision be Jimmy singing a rousing rendition of ‘Cheryl Moana Marie’? Will Boyd and Bella be brave enough to hold hands, and how many times will ‘boobs’ be mentioned?