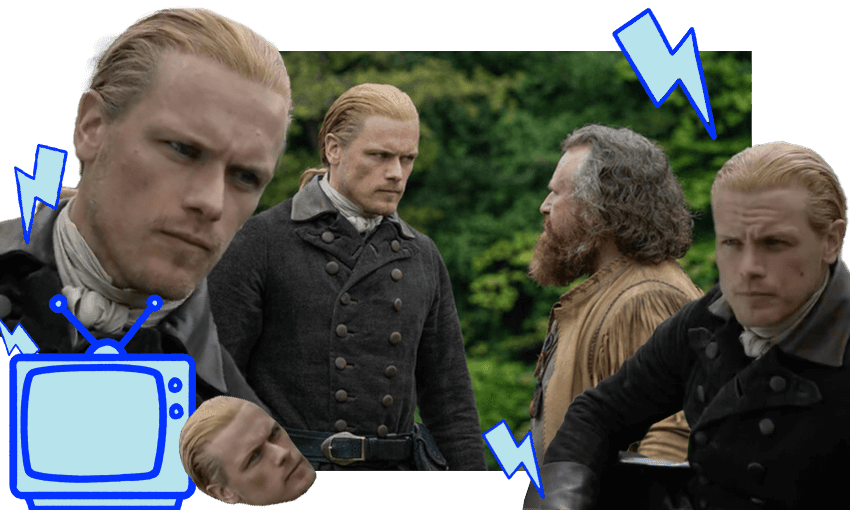 Jamie Fraser’s face told a thousand stories in this week’s episode of Outlander, and all of them were sad. Tara Ward recaps episode four of season six.

Friends, we are at the halfway point of our Outlander journey, and season six is turning into the tenderest season yet. Like the three before it, this episode was filled with quiet moments, emotional conversations and inspiring wisdom. We also had Claire drugging her mates in the name of medical progress, and a bit of Fraser hanky panky involving the phrases “lubricated brilliance”, “greased lightning”, and “were you not thunderstruck there at the end?” Oh Outlander, never change.

Episode four belonged to Young Ian, who finally revealed why he came back to Fraser’s Ridge. As he and Jamie visited the Cherokee to deliver weapons from the Crown, Ian opened up about his life with the Mohawk. He told Jamie he had loved a woman named Wahionhaweh, but their child died at birth. Ian was banished from the tribe to return to his own family, only to discover his friend Kaheroton – who happened to be with the Cherokee as Jamie and Ian arrived – had taken Ian’s place with Wahionhaweh.

The flashbacks explained why Ian struggles to find a place he feels he belongs, and nobody understands that quandary better than his favourite uncle. Jamie Fraser is a rebel, a loyalist, an agent of the Crown and an enemy of the king. He’s got a lot on, and I guess if they had personalised plates in 1773, Jamie would struggle to find the perfect word to sum himself up. No pressure, but pretty sure “B1GG1NGE” would do the trick.

Things were tense in North Carolina. Everyone wanted to fight and there were lots of big weapons, and nobody was more worried than Jamie Fraser. He looked into the distance, he stared into his soul. Did he need a tissue for his issue? No. God blessed Jamie with a furrowed brow, a clenched jaw and a face that tells a story without a single word falling from those tightly strained lips.

Jamie was frustrated when Brianna told him what would happen to Cherokee Nation in sixty years time, and he fumed when drunk Scotsman Alexander Cameron picked a fight at the Cherokee camp. Poor Jamie, he never wanted any of this. He just wanted to go home and pick wild strawberries with his hot wife while he harmonised the chorus to ‘Greased Lightning’ like he was Danny Zuko in a T-Bird jacket.

But wherever Jamie Fraser’s face goes, we go too. In a heartfelt scene, Ian opened up about the grief of losing a child, and Jamie revealed that he and Claire had experienced the same trauma. These are the  moments that Outlander does best, when the melodrama is stripped back and the emotions hit you like a thunderbolt. Is that what Jamie meant with the whole thunderstruck thing? Slap me on the back and call me Jim Hickey, I’m here for the weather.

Jamie was automatic, he was systematic, he was hydromatic. Maybe he was trying to help his nephew work through his pain, perhaps he was trying to remember if Claire had said “lubricated brilliance” or “brilliant lubrication”. You can see his 18th century cogs whirring, and they came up with plenty of worthy advice for Ian, like it doesn’t matter what your name is or where you come from. All that matters is your heart. And your greased lightning.

Back at Fraser’s Ridge, Claire continued to welcome the locals into her freaky cult of modern medicine by encouraging them to partake in recreational drug use. Lizzy and one of the Tonsil Twins were thrilled to be Claire’s medical guinea pigs for her DIY anaesthetic, as Malva watched on with fire in her eyes and mischief in her brain. There’s trouble ahead with Malva, and I’m guessing most of it will stem from Malva spying on Jamie and Claire playing thunderstruck in the barn.

The episode finished as it began, with Jamie and Claire putting the sex into sexagenarian. After Jamie warned Tehwahsehkwe that future governments will displace Cherokee Nation off their lands, he returned home to a warm welcome from the good doctor. Malva secretly watched their barnyard escapade, even standing on her tiptoes to get a better view. Oh Malva, call yourself a villain? The least you could have done is bring a stepladder and some binoculars with you.

Something tells me this may be the last bit of happiness Jamie and Claire enjoy for some time, if Malva Christie has anything to do with it. What will happen when her strict father Tom finds out? If he couldn’t stand the filth in Claire’s 18th century novels, wait until he reads the lyrics of ‘Greased Lightning’.